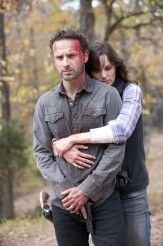 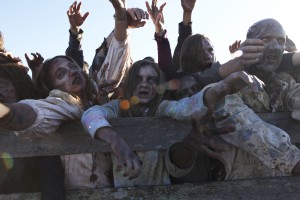 In the thirteenth episode and season finale of THE WALKING DEAD Season 2, “Beside the Dying Fire,” a zombie herd ends the group’s sojourn at the farm and not everyone makes it out alive. With the comfort of a possible new home gone, and truths shared about Shane’s (Jon Bernthal) death and the greater mystery surrounding the genesis of the zombie apocalypse, the survivors once again face an uncertain future plagued by doubt. Can Rick (Andrew Lincoln) finally take the reins as leader, even if it means becoming a dictator in a post-democratic world? And is there a future for this ragtag group? It might lay just over the horizon.

Fans that worried the second season held back too much on the zombie front certainly get their fill here in a stunning siege that takes up most of the first half of the episode and ends with imagery that recalls the classic NIGHT OF THE LIVING DEAD as well as a barn-burning at the end of the iconic ZOMBI 2. In a beautifully structured opening that takes us back to Atlanta and a certain helicopter, we follow a herd as it shambles through days and nights, finally reaching the farm as seen in the closing moments of last episode, when the shot Carl (Chandler Riggs) fired to take down Shane inadvertently rings the dinner bell for the walking dead.

The action is cinematic and impressive, with moonlight washing over corpses and desperate humans, and there’s carnage galore as Patricia (Jane McNeill) and Jimmy (James Allen McCune) meet their fates. Neither one of them were ever imbued with an ounce of character, however, so their loss is not emotionally impactful but merely serves to provide the bloody punctuation for the attack.

Some viewers might even take an extra measure of glee in seeing the farm setting – so long emblematic of the stalled storyline for much of the second season – falling to the horde as the survivors struggle to make it through their darkest night. But even if you were one of those that questioned the pacing this year (I was certainly one of them), there’s something to be said for holding back a bit and then exploding in the finale with an epic war between the living and the dead. Although the show always has a cinematic quality, this episode feels like many great zombie films compacted into one tense hour; it even made the loss of the farm feel profound. Another aspect to this approach is that character is largely eschewed in favor of action, but it’s no loss – after all, we’ve spent weeks exploring the psyches of nearly every cast member, so now it’s time to let them all loose and see who comes out the other end. 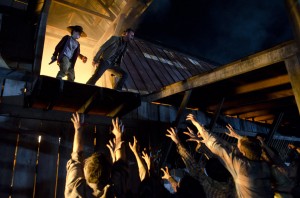 Once the others have retreated, it’s time to take stock, but ripped away from the only security they had, it’s understandable that everyone begins to question even the value of staying together. One thing that doesn’t make sense, though, is the way in which Carol (Melissa Suzanne McBride) and Lori (Sarah Wayne Callies) turn on Rick when he finally steps up to the plate, reveals what Jenner told him back at the CDC, and lays down the facts about Shane’s demise.

Carol’s ignorant reaction is irksome enough – and at least Daryl (Norman Reedus) tries to set her straight, but Lori? She’s angry? In episode 9, “Triggerfinger,” she perched on Rick’s back like a goblin and whispered in his ear that Shane was plotting against him; she virtually ordered Shane’s murder. Now that Rick tells her he followed through, she has the gall to be mad at him?

In a post-finale interview with Robert Kirkman, the writer/executive producer did address this point by suggesting that it’s projected self-loathing from a woman consumed with guilt over what she wrought on two best friends. I can almost buy that, but in the show itself the scene just rings false, or at least doesn’t provide an inkling of the nuance that Kirkman offers. Perhaps we’ll see more on this point early next year. Even if we do, I can’t help but feel that although Callies has struggled valiantly with the material, the character of Lori has been a very poorly served one. She’s wildly inconsistent and almost thoroughly unlikeable. Still, the prison arc is coming…

As for the big revelation that everyone carries the zombie virus, I have to admit to being surprised this has even become a plot point. Being so used to the genre, I had always assumed from day one we were in a latter-day Romero-esque universe in which everyone that dies gets back up. It surprised me that they felt it important to establish a viral source and spell it out, but I suppose I was underestimating the need for the larger TV audience to have the mechanics explained just a bit more. It also seems the show wants to have it both ways, with elements of the supernatural side of the genre overlaid with a more scientific structure – everyone comes back regardless of contact, but it’s the result of an infection. It all amounts to the same thing though, which is fine, but the bigger question is: What does this even matter? There’s no sign the disease is killing them or doing anything other than laying dormant until they die, so since they’re already resigned to a world with zombies, this changes nothing apart from the need to deliver a head shot to anyone that keels over.

Reedus’ Daryl is one of the best characters on the show – he cracks a racist joke here in a knowing nod to his roots, with everyone aware that he has grown beyond that person – but Hershel (Scott Wilson) has also grown into a favorite of mine after he woke up to reality and channeled his farmer stoicism into supporting Rick’s leadership. I’m glad to see he made it through the dark night and will rejoin us for at least some of Season 3. It’s also satisfying to see Glenn (Steven Yeun) at long last tell Maggie (Lauren Cohan) he loves her.

In another nice touch of symmetry, we end the season back on that highway where the group had left provisions for Sophia. There’s a clever reversal where Rick tells Hershel to have faith, only for the old man to respond with a funny yet profound comment about Christ’s promise to resurrect the dead. And then…there’s Michonne.

Although the show has quite rightly forged its own path by taking elements of the comic and reshuffling them to what they hope is the best possible effect on the small screen, the closing moments of this episode surely warmed the heart of many long-time fans. Not only did Michonne at long last show up (well, played by a stand-in, but still…), but as the series faded out until next season, the prison appeared bathed in moonlight over the horizon. With recent news that the Governor has been cast (David Morrissey) and now word on who will wear Michonne’s hood (Dania Gurira), it looks like we’re set for an adaptation of what was arguably the WALKING DEAD comic book’s finest and most harrowing story arc.

The third season may very well follow suit with other sci-fi/fantasy/horror shows and be its very best; I for one can’t wait to find out. Until then, board up the doors and windows and listen to Rick; after all, he’s the leader! This is no longer a democracy, and it’s about time too…