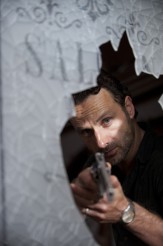 In the ninth episode of THE WALKING DEAD Season 2, “Triggerfinger,” Rick (Andrew Lincoln), Hershel (Scott Wilson), and Glenn (Steven Yeun) are pinned down at the bar following their disastrous encounter with other survivors. Meanwhile, Lori (Sarah Wayne Callies) recovers from her accident but faces a growing threat at home. And Maggie (Lauren Cohan) finds that love is often worse than not caring at all.

One of the welcome themes in this episode is the introduction of a theme that hasn’t quite reared its head in the show although it’s played a huge role in the comic book series. One of the zombie genre’s recurring tropes is that other living survivors are ultimately far more dangerous enemies than the mindless, flesh-eating undead. Although we’ve seen plenty of tension in the group, and issues arising from the clash between Rick’s people and Hershel’s circle, we’re finally meeting another group of survivors that pose more of a threat to our heroes’ survival than any walking corpse. Why can’t we all just get along? It seems that the worst aspects of human nature will follow us right into the zombie apocalypse.

Rick’s handling of the situation earns points for not necessarily following the most obvious route but rather one that underscores his continuing – and perhaps irrational – devotion to an older code of honor. At first remaining silent to let the newcomers pass by, Rick decides to tell them that his party killed their two friends. His honesty escalates matters fast, but it also shows us a hero that refuses to let go of ideals that clash with the culture in which he now lives. He was willing to take those two shots last week, and now he owns up to that choice. But is it worth it? And is Shane (Jon Bernthal) really right, or does Rick’s brand of leadership have any future in the world of the Walking Dead?

After Lori’s inexplicably dumb decision to drive off on her own – while pregnant no less – to fetch Rick, she’s pinned down in a wrecked car with a ravenous zombie (just one, they only travel in singles these days – thanks AMC) at the window. Although her predicament is ridiculous, the staging of her escape from the car and the zombie pushing his face through broken glass to get at the food is satisfyingly dark and suspenseful. Another walker arrives to pose a momentary threat, but wait – she can just walk away from that horrendous wreck? Should we add “flip Lori’s car” to “nuke the fridge” in the pop culture lexicon?

Lori doesn’t corner the market on stupid this week as in the midst of Rick’s siege management, he sends Glenn – not exactly the most bloodthirsty, combat-ready member of the team – into the basement alone to face what could be an army of gun-toting maniacs. This is the second time that Glenn, who has valuable foraging skills, has been deliberately endangered to no good purpose. It’s getting harder to root for the living when they display such inconsistent lack of consideration for one another and the reality of this nightmare existence.

Which brings me to Shane. I know many folks don’t, but I like this Shane. He may be tactless – as Andrea rightly points out in one of the stronger scenes of this episode – and he may seem unsavory by our standards in our current culture, but in the world in which he now lives, Shane is pragmatic and effective. He cares for who he cares for and to hell with everyone else; he will protect those he loves (whether he’s right to consider them his loved ones or not) and do whatever it takes to survive. A Shane that adopts some of Andrea’s advice could be a formidable leader, but will his time run out?

Lori tells Shane that Rick knows about the affair, and in the aftermath of that revelation it’s becoming clearer than ever that although I believe the “new” Shane has been compelling – and perhaps the survivor with the only truly practical, realistic approach to the situation of any of them – it may be time for him to share his comic book counterpart’s fate. When Lori tells Rick about the possibility of a mounting threat from their old friend, sitting behind her husband and whispering it in his ear, there’s something so dark and insidious about the scene that Shane’s death is surely imminent. Will Shane make it to the end of Season Two? Place your bets, but I hope Bernthal’s agent is shopping him around now.

As for the rest of our ensemble, Glenn comes to the rather bizarre conclusion that he should push Maggie away since her profession of love is making him go soft, causing him to freeze and protect his own life at the expense of others. It seems silly to deny a genuine romantic connection in a time of such uncertainty, but this will probably sort itself out soon. Carol (Melissa Suzanne McBride) shows greater strength when robbed of Sophia than she ever did when the girl was alive, and her confrontations with Daryl (Norman Reedus) help to bring him back around…apparently. He’s holding fast to his outsider status, but by episode’s end he’s making an attempt to rejoin the group.

Hershel also reasserts his authority on Shane, but it’s earlier during the bar siege that he really shines, with the increased zombie presence providing the catalyst for plot and character development – as they always should. Hershel continues to confront the truth of what the creatures are, understands the value of keeping the group together, and has a fascinating debate with Rick about whether or not to “put down” one of the other survivors (Michael Zegen) now impaled through the leg by a fence spike. They choose to save his life; why not? They’re heroes. But the way they do it…ah, therein lay the sequence’s brutal punctuation. And will their compassion prove to be their undoing?