The stars talk about battling zombies on the hit AMC series 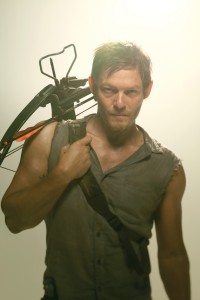 AMC’s hit series THE WALKING DEAD returns for the second half of its second season tonight at 9 PM. Based on the graphic novels created by Robert Kirkman, THE WALKING DEAD follows a small group of people trying to survive after most of the world’s human population has become flesh-eating zombies.

THE WALKING DEAD was created for television by filmmaker Frank Darabont, but after the end of first season, he was taken off the series by AMC. Executive producer Glen Mazzara is now the show runner.

The first half of WALKING DEAD’s Season Two ended with a bang, lots of them. Farm owner Hershel Greene, played by Scott Wilson, has been keeping a barn full of zombies, including family members, because he believed they were ill and could be cured. Meanwhile, most of the characters had been engaged in a search for Sophia (Madison Lintz), the missing little girl of Carol Peletier, played by Melissa Suzanne McBride. When survivor Shane (Jon Bernthal) insisted on opening the barn and shooting its undead occupants, Sophia is among the walking corpses. Carol watches as her child is shot in the head by group leader Rick Grimes (Andrew Lincoln).

McBride, Reedus and Yeun sit down to say what they can reveal about WALKING DEAD. Given that they’re surviving shooting together in the broiling summers ofAtlanta,Georgia and frequently covered with muck during their work days, it’s not surprising to see there’s a lot of camaraderie among the trio.

AX: So were you guys gratified, surprised, or not surprised at all when WALKING DEAD got picked up for a second season?

NORMAN REEDUS: I think we knew it was coming, yeah. I mean, we kind of kicked butt on Season One, and it was so fun and good and everyone was really into it, I think when Season Two was announced it was happening, I think we weren’t overly shocked.

MELISSA SUZANNE McBRIDE: I was surprised. Well, not surprised like it wasn’t going to happen. I was happy.

STEVEN YEUN: I was very happy.

McBRIDE: It was picked up quickly. Sixteen episodes [have already been picked up] for next season, Season Three.

REEDUS: Yeah. It feels like we’re doing something right. I remember reading the pilot in the beginning and thinking it was really going to be like something I would watch. 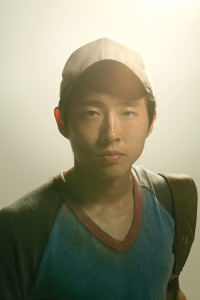 AX: Not asking if one is better than the other, but is there any contrast in show running styles between Frank Darabont and Glen Mazzara?

YEUN: You know, obviously, each one’s going to have their own style. I would say we’re lucky to have either one. We were very fortunate to have Frank, and it sucks what happened [in terms of his absence], but Glen really brought his own thing and he’s fantastic.

REEDUS: It brought the cast and the crew and the writers and everybody closer together, because [in Darabont’s firing] something bad happened, and we worked really hard to keep our good thing, and that’s what we’ve done. And Glen’s done a bang-up job. He’s been awesome.

McBRIDE: Yeah. It was a show that Frank worked really hard to bring to television and it was a great project and a lot of us were very happy to be there and we had a job to do. And it’s still a fantastic job, and I was happy to hear that Frank has just written a pilot [L.A. NOIR] that got green-lit for TNT. So that’s exciting.

AX: How much, if any, how much have you guys read the WALKING DEAD comic books, or has the series diverged so much from the source material by now that it’s not relevant to what you’re doing?

REEDUS: I got into [the comics] when we first started doing the show, but I didn’t want to know exactly what happened and [the series has] become its own animal. Rick Grimes is Andy Lincoln to me now and so forth. So I didn’t really want to know the storyline so much, to keep it fresh. But I do know them, I just haven’t read them.

YEUN: Yeah. I think the comics are there and they’re amazing groundwork, but I think the TV show now is going to be in its own world. So I think it would not help us to follow [the comics] heavily, especially since we are now I think one with our own characters. So we don’t want to inform ourselves from any other things.

McBRIDE: I read a little bit of them and then I decided just to back off, because I didn’t want to know too much [about where the series might go], but it has become its own thing. There are going to be new characters introduced that create new conflicts and different catalysts for the characters to change and then find aspects of themselves that are challenging other people, and it’s interesting to see everybody sort of evolving and changing like what you first thought of Rick, and you look at him now. That’s what I like about the show, just by virtue of the circumstances, they become different than what you thought. And I like that. It’s a lot to explore. 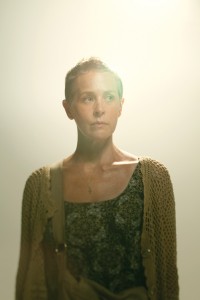 AX: Your characters have all explored a lot already. How far ahead of the revelation that Sophia was going to be found undead in the barn did you know about that story development?

McBRIDE: There was some speculation early on, but some of us were like, “No. What, no, that can’t be.” And then the week before we started shooting it, it was for sure, and here she’s coming out of the barn.

AX: What was your reaction?

McBRIDE: “They did! Oh, wow, they did! Well, Sophia’s going to be the most beautiful zombie child in the world.” Wasn’t she? My reaction was, “I can’t believe they did it. They actually did it. Wow. It’s going to be tough to shoot and I hate to say goodbye to Madison.” Because there was always the possibility that we would find [Sophia] somewhere, but this means that she dies twice. You’re done.

AX: Is Carol going to go completely inward, or will she be able to find some human connection after this terrible loss?

McBRIDE: She looks after Darryl, a little bit. She looks out for him. She keeps her eye on him.

REEDUS: He’s like a child, a little bit [laughs]. She and I are both very similar in a lot of ways. Everyone else is out getting nookie and impregnating people and

REEDUS: Boinks, that’s right. But we’re very similar. We obviously rely on each other, as Darryl and Carol would.

McBRIDE: Yeah. I like the depth of their connection. She’ll keep her eye out for Darryl. She’s also going to be caring for herself. We’ll see her stand up for herself a little bit in the second half of the season.

AX: Glen has started standing up for himself as well, after starting out letting other people tell him what to do. How has that been?

YEUN: It’s been great, and I don’t think it’s been completely finished yet. He’s an evolving character – as everyone is. And I think the second half is definitely going to be really dynamic as well.

AX: Can you say anything about how the relationship with Maggie may develop?

YEUN: How can I say this without giving anything away? Whatever they have built up towards, it is what it is, but now it’s a crossroads to see how they deal with the reality of the situation, which is, yeah, love in this world is great, but it’s not simple, so how do you [handle it]?

AX: You had a scene where Glenn was dangled down a well, and a lot of that was obviously you and not a stunt double. How was shooting that?

YEUN: That hurt a lot. It was fun at first – it was fun throughout, because it was fun to just go crazy, but [the rig] was basically a seat belt around my groin, so hanging on that for fourteen hours is not as fun as it sounds.

AX: And poor Darryl has been shot by a gun, shot with an arrow. Any more injuries ahead?

REEDUS: He gets injured every single episode. Not as severely as when he had an arrow in him. I mean, yeah, he gets injured some more, all the time. [to Yuen] What about you?

YEUN: I have whiplash every other day on this show. I have so many bruises and cuts on my body all the time, he [Darryl] gets ticks on his private parts, she [Carol] has mental breakdowns. We’re all suffering all the time.

AX: Mr. Reedus, you’ve done a lot of genre material – you were in MIMIC with giant bugs pretending to be people, BLADE II with vampires, PANDORUM with aliens, the MASTERS OF HORROR episode “Cigarette Burns” and now WALKING DEAD. Do you have a favorite kind of non-human critter you’ve played against?

REEDUS: I like John Carpenter’s “Cigarette Burns,” the Willowy Being with the cut-off wings. That was fun.

AX: It seems like vampires were the main supernatural book and screen supernatural beings for a long time, but now zombies are coming to the fore. What do you think this may mean?

YEUN: I think the world has righted itself [laughs].

AX: Why do you think people are so fascinated with apocalyptic stories in general, zombies or other kinds of end of the world scenarios?

YEUN: On my birthday, everything’s going to be done.

YEUN: December twenty-first, 2012. [The apocalypse is also a metaphor for] being sick, you grow old and you become sick. It’s all real-life stuff. It’s also people that would never hang out together, ever, figuring out how to hang out together. I mean, movies like CONTAGION – that scared the crap out of me. More so than THE OMEN.

McBRIDE: I think [the apocalypse] is kind of a meme, for one thing. Once somebody starts talking about it, and then creating speculations, and then you have all these theories and then everybody gets on the bandwagon and it’s just this overwhelming worldwide [screams in panic], you know? Plus, it’s a thing that we fear. We like to look at it, but don’t touch, because let’s see how close we can get and see other people [dealing with it].

AX: Anything else you’d like to say about THE WALKING DEAD right now?

YEUN: To the fans are watching the show, we really love this job – it’s our favorite job, and you guys are keeping it alive, so thank you.