One brother must fall in a tragic twelfth episode 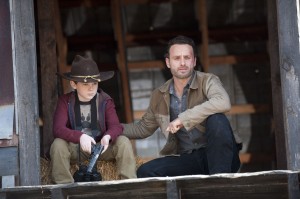 In the twelfth episode of THE WALKING DEAD Season 2, “Better Angels,” Dale (Jeffrey DeMunn) is laid to rest, and the group takes stock of where they stand. Hershel (Scott Wilson) invites everyone into the house, hearts are bared, and the survivors plan to heal and prove that Dale’s fear of a “broken” group is unfounded. Even Shane (Jon Bernthal) is given one last chance by Rick (Andrew Lincoln) to put aside their growing enmity and reaffirm their bond as friends. Will Shane be able to live with losing Lori (Sarah Wayne Callies) and Carl (Chandler Riggs) to the real family man, or will he push good-hearted Rick too far? As brother confronts brother one last time, an even greater threat looms just beyond the tree line – the farm is not the oasis they thought it was…

After so many episodes this season of just running in place, it’s been very satisfying to see the series tackling some of the biggest issues between its characters, pushing them forward no matter how difficult or dangerous the resolutions may be, and setting things up for what looks to be a spectacular finale – and one that will at long last address an ongoing criticism of the show. Where have all the zombies been? In the woods, apparently, but don’t worry – they’re coming.

Rick’s powerful speech about proving Dale wrong in the teaser is one of the more dramatic recent lead-ins to the always effective theme tune and titles, and there’s also a nice sleight-of-hand at work for most of this episode. Everyone is more centered than we’ve seen them in a long time – it took the death of Dale to force them to overcome many of their petty problems and form a tighter bond. Hershel’s invitation draws a line under so many rivalries. The time for those kinds of boundaries is over; it’s time to unite and survive.

Unfortunately, the issue of Randall (Michael Zegen) still causes concern, but Rick is resolved to let the boy go. Between that and Lori’s heartfelt admission to Shane that she will heal her family and move on, Shane seems to be driven more insane than ever before. There’s a delicious irony in the fact that Lori’s decision to try to reach out to him, to thank him for everything he did back in Atlanta while making it clear that their affair was a mistake, only serves to turn him more against his friend and brother. Descending further into animalistic rage and willing to do anything to protect the group on his own terms, Shane commits murder, hurts himself to cover it up, and loses another part of his soul in the process. The clock is ticking…

With Carl as a pawn to coax Rick out, Shane makes a crucial mistake by bringing the gun Carl took from Daryl (Norman Reedus) into play. Comic book fans know that an armed Carl can be a threat to Shane, and the events that play out in this episode, while different, resonate strongly with their source material.

The final sequence is towering in its impact on Rick and the others, reaching back to the very first episode. Under an eerie, operatic moon, the two men that would be leader face each other, but it’s our hero – so long unwilling to take the last step, make the last shot (except where Sophia was concerned), do what has to be done – literally stabs his best friend in the heart and rages at a universe that would force him to do something so dark and soul-rending. But when Shane rises and Carl brings him down again – not before giving Rick a creepy moment of fear that his son has turned against him – it unites father and son at a turning point that will surely transform this entire group. And then the zombies come…

I had grown to like this version of Shane, and I’ve been vocal in past reviews that I’ve felt his philosophy was the right one for the world in which this group now lives. I do feel this episode tried to force him just a little further down the path of unreasoning madness in order to set up his departure, but ultimately it works well and provides Rick – who should, after all, be our leader and strongest central character – with a chance to step up and fill that void. Perhaps some of what Shane represented will live on in his ‘brother,’ but I will miss the stubble-headed maniac.

There are glimmers of where the show will go next. Rick’s talk with Carl is wonderful as they both try to accept that childhood no longer means the same thing in this world. Glenn (Steven Yeun) is still inexplicably keeping Maggie (Lauren Cohan) at arms’ length, but Daryl looks set to be a worthy right-hand man to Rick with the absence of Shane. There’s also a warm bonding moment between Glenn and Andrea (Laurie Holden) when repairing the RV become a means of exploring their memories of Dale.

This speaks to another issue I’ve noted recently. In this and the other recent standout episode, “18 Miles Out,” these characters act and sound more emotionally real than they have in quite a while. In both cases, the episodes have been co-scripted by show runner Glen Mazzara, which we might take as reassurance that he is indeed the man to guide the show in the coming season and perhaps beyond. Having been the one to write the group into Hershel’s farm in “Bloodletting” last year, it’s also appropriate that Mazzara write them out of there. Teamed with Robert Kirkman himself on next week’s finale, “Beside the Dying Fire,” it should be an excellent indication of where the show is settling in for its third year.

And perhaps most importantly, the last couple episodes have had our survivors awakening to a terrible truth. The two guards at the compound that Rick saw in “18 Miles Out” had no visible bites or scratches, and when Daryl examines the zombie Randall this week, he realizes that the boy died from Shane snapping his neck. Therefore, dead people are reanimating without being bitten or scratched. How is this possible?

Zombie aficionados know that in some versions of these stories, it’s pretty simple: the universe is broken, and death no longer holds sway as it once did. But I suspect we’re adhering to a viral model in this series, which might tie back to that mysterious something that Jenner whispered to Rick at the CDC in the first season finale. Could it have been: “We’re all already infected?”

As for poor Randall, where was he from anyway? I thought it amusing than when T-Dog (IronE Singleton) came to get him at one point, he joked that “the Governor” called to give him a reprieve. Could he have been more right than he knew? Hmm…

Next week, I think it’s time to say goodbye to the farm and possibly some other cast members.