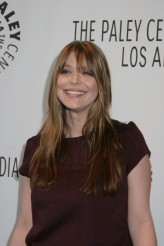 The multi-hyphenate talks about writing, acting, directing and more

Amber Benson, novelist/actress/filmmaker, is touring to promote her new book HOW TO BE DEATH, the fourth installment in the adventures of Calliope Reaper-Jones, born as daughter to Death himself and now inheritor of Dad’s job.

However, Benson is involved in a number of other projects as well. In Part 2 of our exclusive interview, she talks about what else her multi-hyphenate life encompasses at present. 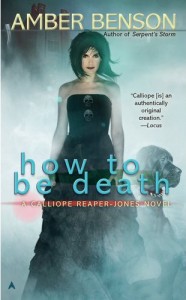 ASSIGNMENT X: You were working on a Web series as co-director with Adam Busch, who was also your co-director on the feature film DRONES  …

AMBER BENSON: We’re sort of doing it by the seat of our pants. At the moment, it’s called GIRL ON GIRL, which is a little naughty-sounding, but basically, it’s about two women[who] get into these scrapes trying to meet men in Los Angeles. It’s very CURB YOUR ENTHUSIASM-esque, it’s all improv. They get into a lot of ridiculous situations.

The first episode is the two of them having a fake casting [session] where they’re going to meet men. So they’re getting guys to take their shirts off and making out with them. It’s really funny. My friend Megan Titus actually conceived the idea. She’s an actress and she came to me with it and I just thought it was really funny, so we’re in the process of shooting our first run of them right now.

We did the pilot and it got a lot of people interested, so now we’re trying to figure out the best place to put it. We have a company that’s interested in picking it up and distributing it, so we’re working with them right now to get it more to their liking. I think it’s a little overtly sexual in the pilot and I think they want us to tone it down a little bit, which is fine. I can understand how a two-minute girls making out thing at the end might make some people … [laughs] I think it’s really funny and kind of hot, but that’s just me. This Web series has sort of taken over my time at the moment.

BENSON: Megan Titus, my friend who conceived the idea. I think Fred Stoller is going to do a cameo for us. I think we’re going to do a couple and see what happens. But for me, it’s more about just making it as funny as possible.

AX: And this is a production being made for the Internet?

BENSON: It would be a Web production. It would be for the Internet specifically, because I’m convinced that’s the future. There’s no point in making an independent film right now. It’s about making a Web series, getting people excited. This whole YouTube/celebrity blogging thing that’s going on right now – I’m old, I guess. I had no idea all this existed. These people [who make YouTube videos] are celebrities and they’re kids – late teens, early twenties and there are millions and millions of people who watch everything that they put up on YouTube. And I’m like, “Why are we not here doing this stuff?” And that’s sort of what brought me to the Web world. I was like, “I’ve done these little Web things, but these are scripted. There’s got to be a way to blend the scripted with the blogging and the transmedia.”

All that stuff is very intriguing to me, so I want to find a way to bring all those things together, and I think this series is the way to do that. I was so intrigued by this guy John Green and what he’s done on YouTube. It’s amazing. He and his brother have a whole YouTube channel. They have millions and millions of viewers, and he’s a good writer on top of that, but he was able to parlay that into his book, which has become a best-seller. It’s just masterful what they’ve done, he and his brother. It’s unreal. It’s very, very impressive.

BENSON: Oh, yeah. Javi just asked Adam [Busch] and I if we wanted to do it. It’s really fun. It’s called REVERSE PARTHENOGENESIS. I write in a group, Javi and I and my friend Sarah Kuhn and my friend Sarah Watson and [other friends] – we all get together and we shame each other into writing, so it’s called the Shame-In, and we’re all working on different things, but we’re all there to kind of harass each other and be like, “Get off Twitter. Get off Facebook. Write. You’re supposed to write.” And it’s really great. It’s how I got the [HOW TO BE DEATH] done. Without that crew of people making sure that I was on top of my game, it wouldn’t have gotten finished. They’re just amazing people, amazing friends. So I take my hat off to the Shame-In. Without it, I would be nothing. 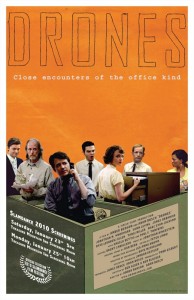 BENSON: No, it’s more along the lines of what happens when you discover that one [half] of a couple may or may not be the anti-Christ. I don’t want to give too much away, but it’s really funny and Edmund Lupinski, who plays the doctor, is hysterical, Adam’s creepy and I’m hysterical. It’s a really fun short.

AX: You’re also involved in the vampire-trapped-at-a-desk-job Web series COUNT JEFF. What is your involvement in that?

BENSON: I just acted in COUNT JEFF. I had nothing to do with it. It’s [created by] a guy named Matt [Hou] and his partner Chad Rocco – they did the whole thing, they conceived it, they put it all together. They saw Adam in something and brought him in and he was like, “Hey, you should talk to Amber about playing one of the parts. They were doing it as a [Web] series, but they’ve only shot the first season, the first four or five episodes, and I’m in a couple of them. It’s Adam and this guy Jason Rogel, and they’re really, really funny, the two of them together. It’s highly worth a watch, I think.

AX: And your feature film DRONES is now available on Netflix.

BENSON: Yes, the film that Adam Busch and I co-directed. Samm Levine and Jonathan Woodward and Angela Bettis star, James Urbaniak, it’s a great cast. It’s on Netflix Streaming, so go check it out. It’s available at Amazon as a DVD as well.

AX: Somebody had asked somewhere if DRONES is available in Russia?

BENSON: It’s not available there yet. We’re working on it, talking to different distributors. As for right now, it’s just available in North America. You can buy the DVD from Amazon.

BENSON: A couple of other things, actually. I’ve really gotten into my blog. Just go to amberbensonwrotethis.blogspot.com – that’s my blog. And also, my YouTube channel has me reading the first chapter of the new book, HOW TO BE DEATH, and that’s just Amber Benson Made This on YouTube. I have a one-shot [comic book] from IDW called MADAME CONSUELA AND HER ARMY OF ONE, and it’s for ZOMBIES VS. ROBOTS. That one’s really fun, too – there might be some penis in it. We’re doing a series of these for ninety-nine cents on Amazon. Mine [came out Feb. 16], which is kind of cool.

AX: You also have some short stories coming out …

BENSON: I’ve got one Chris Golden has asked me to write for his twenty-first-century guide follow-up – that’s more of a hard sci-fi short story, it was really fun to write, and I have a short story in a book called COURT OF THE FAE, Rob Thurman, she’s got one in there as well, and then I have written a short story for Toni Kellner and Charlaine Harris for their new anthology, AN APPLE FOR THE CREATURE. It is a DEATH’S DAUGHTER [story] and it has some crossover with another series that I’d like to do eventually, so there are some new characters in there that are fun.

AX: With all of this going on, what do you want to do? Do you want to hyphenate between acting, writing, directing, or do you see one taking precedence over the others?

BENSON: It sounds like my life is very exciting when you explain it like that, but sadly, it is not [laughs].  I’m going to learn how to underwater basket weave. You know, I just do whatever pays the bills. I just do whatever is creatively intriguing and whatever I can get money for, and that’s pretty much where I’m at at this point. It is really, really hard to make a living now. Very little stuff pays you up front, so the books have been really great. They’ve become my life source. Without them, I would be on the street with a hat, singing a cappella on the Promenade. So you have to do lots of stuff. You have to be a multi-hyphenate in order to just survive. This isn’t about being famous – this is purely about survival.

Related Link: Exclusive Interview with Amber Benson on HOW TO BE DEATH – PART 1