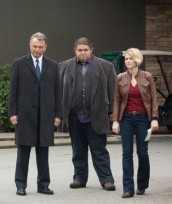 The executive producer/show runner talks about the time-warped procedural from J.J. Abrams 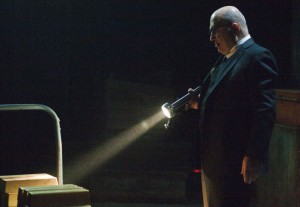 Fox’s new series ALCATRAZ, Mondays at 9 PM, is the newest television offering from prolific producer J.J. Abrams. In the show, we learn that the maximum security prison on Alcatraz Island was closed fifty years ago, not for the reasons given to the public, but because all of the inmates disappeared overnight. When they begin showing up in present-day San Francisco, it’s up to a team played by Sam Neill, Sarah Jones, Jorge Garcia (who previously played Hugo “Hurley” Reyes for Abrams on LOST) and Parminder Nagra to track down the out-of-time miscreants and figure out what’s happened.

As ALCATRAZ executive producer/co-show runner Jennifer Johnson explains it, “Alcatraz is notorious, and the criminals who were housed there were the worst of the worst. Part of their crimes are somewhat reflective of their time. So when we meet them present day, part of their unfinished business will be these tremendous and heinous crimes they were pulling off in the past. They haven’t aged and they feel that no time has passed for them and they have the same venom and the same urgency in the same crimes they’re perpetrating as they did in the past before they disappeared, [which] presents our team with a unique challenge and makes them think differently than other cops do, because these guys are [figuratively and legally] ghosts. They have no credit card records – they barely know what a credit card is. They don’t have friends and family members they can go visit. They don’t have a girlfriend or children around. So it’s a unique crime show in that our team has to think completely outside the box.”

ASSIGNMENT X: When did you become involved in ALCATRAZ?

JENNIFER JOHNSON: I came into it on episode two, which is the first one after the pilot, as a consulting producer, and then switched to co-show runner with Liz Sarnoff before she left. 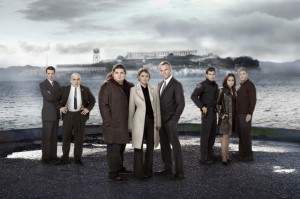 AX: Can you talk about how ALCATRAZ changed, if it did, between when you came in and where it’s at now?

JOHNSON: The flashbacks were always fantastic, really vivid and alive, and we just wanted to make sure that the A stories were moving as fast as the premise promised. So we made that adjustment. It’s nothing that anybody [as a viewer will notice], because they’ll be seeing it for the first time.

AX: Were there any changes in the philosophy of what you were doing in terms of storytelling?

JOHNSON: Not really. It was just to make the A stories more at the forefront of the show and make the flashbacks reflect what was happening in the A story a little more

AX: What is the division of responsibility between the ALCATRAZ producers? There seem to be a number of you.

JOHNSON: Jack Bender is our producer/director, so he resides in Vancouver and he is responsible for directing episodes, for hiring directors, for managing the directors once they’re up there and keeping them true to the filmic style of the show. Dan Pyne and myself are show runners, so we’re every day in the writers’ office, breaking story, editing episodes, [supervising] all of the writing and all of the post, and then J.J. [Abrams] is at [his production company] Bad Robot, and so he reads episodes, watches episodes and weighs in on that. But Dan and I are there daily on the ground.

AX: As far as the “worst of the worst” aspect of your villains, is this going to be like LOST, where we know something scary is going on but it’s not graphic, or like CRIMINAL MINDS, where it is graphic, or somewhere between those?

JOHNSON: It’s both. Because it’s going to be graphic, and these guys are truly heinous. There will be blood. I don’t want to spoil a scene, but it gets very gruesome – it’s very, very scary. I mean, when people watch the episodes, the executives, they say, “Oh, my God, we’re terrified.” So it’s very scary. That’s our goal, to make these guys live up to their Alcatraz promise.

AX: Any old friends from LOST, besides Jorge Garcia?

JOHNSON: In terms of actors? Not yet. Writers’ room …

JOHNSON: Yeah, but Bryan Burk’s not a writer. He works with J.J. at Bad Robot. He’s a producer. Liz [Sarnoff] was on LOST, and I was on the first season of LOST and that’s it. [Director] Jack [Bender] was on LOST, of course.

AX: Do you have any favorite aspect of ALCATRAZ, like the flashbacks or the relationships between the characters, or the thriller aspect?

JOHNSON: I do. My favorite thing is the dynamic between the characters and how people act under pressure, the choices that they make under pressure, so we’re developing those characters and their relationships more deeply, and every episode we learn something new about them. So I enjoy that the most, and then I love the flashbacks. They are short stories within the episodes and they’re beautiful and textured and feel like ESCAPE TO ALCATRAZ and they’re beautifully shot. And then the present-day stories, I love, too. They’re an incredible challenge, as all procedurals are, and these particular – how to balance the finding of clues with people who don’t really exist [laughs].

AX: There are specific reasons each of the main characters winds up involved in this situation …

JOHNSON: Each of the characters has an incredible tie to Alcatraz. Jorge’s Doc Soto stared at Alcatraz the whole time he was growing up, and took the tours as a latchkey kid, and wrote comic books on his obsession with Alcatraz based on a personal crime that happened to him. Understanding the criminal instinct and the criminal mind, combined with a love of comic books, here he is, present-day 2012, and both of those worlds have come together.

Sarah’s character Rebecca has family members who were guards there, or so she thought. So was her grandfather, or so she thought. Her grandfather wasn’t really a guard, he was an inmate. [So there is] an intensely personal connection between Rebecca and Alcatraz. And [Neill’s character] Hauser [has] perhaps the most personal connection – he was there the night the inmates disappeared, but there was a much deeper reason he was struck by [that incident].

So each of our characters has an intensely personal relationship with the island. Every single time Rebecca is chasing these inmates, she might be killing her grandfather. She might be getting closer to answers to her life story.

AX: Anything else you’d like to say about ALCATRAZ?

JOHNSON: Just that it kicks ass. It’s really fun. It’s great. You get to hang out on Alcatraz and it’s like watching ESCAPE TO ALCATRAZ, but it’s influencing the way people act in present day. We’re having a lot of fun.