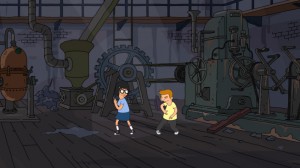 Last year when BOB’S BURGERS premiered, I was very harsh in my critique. This was not a very funny show initially and it had a long way to go in order to find its voice (and stay on the air).

I’m happy to report, the second season premiere “The Belchies” re-introduces a stronger, funnier and more interesting BOB’S BURGERS. It’s amazing what one season of experimentation and storylines can do for a new animated series, and BOB’S BURGERS is proof that if you buckle down and figure out what’s working and what isn’t, you can conjure up some great comedic magic.

The premise follows Bob and his family (wife Linda and kids Gene, Tina and Louise) who own a hole-in-the-wall burger joint. Like all of Fox’s TV families, they’re a loving one, but stubbornness, obliviousness and curiosity seems to get the best of them.

When the kids hear about the legend of a buried treasure in the abandoned taffy factory, they decide to check it out before the building is demolished. The result is a truly strange adventure resulting in Louise befriending a fake person made of taffy (you have to see it to believe it).

There are allusions to THE GOONIES and even Cyndi Lauper gets into the act by contributing reworked lyrics to her GOONIES hit “The Goonies ‘R’ Good Enough” and turning the track into a new song called “Taffy Butt.”

BOB’S BURGERS is still not laugh out loud funny, but it definitely holds your interest and the supporting cast has been expanding to a point that there’s now a great ensemble. It also helps that the series is quite weird. The taffy person is so creepy and strange, but it adds to the surreal quality of the series.

On the downside, I still have issues with Tina and Linda being voiced by male performers (there’s no attempt to hide that they’re male voices either). It’s distracting at times, and frankly, it wasn’t funny before, it isn’t funny now.

Despite the distraction, the series makes up for it with its perverse sense of humor and continued evolution which has made BOB’S BURGERS one of Fox’s most surprising animated hits in some time. And after the disaster of ALLEN GREGORY this fall, Fox must be breathing a sigh of relief that they’ve finally created an animated hit not created by Seth MacFarlane.