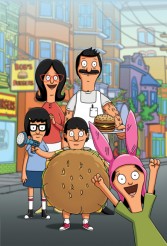 It’s commendable that Fox is trying out new animated series’ on its Sunday night ANIMATION DOMINATION block that aren’t created by Seth MacFarlane.

Unfortunately, MacFarlane seems to be the only one who understands Fox’s sensibilities, what with FAMILY GUY, THE CLEVELAND SHOW and AMERICAN DAD being the dominant forces on this night, right after the Matt Groening created anchor THE SIMPSONS.

Created by Loren Bouchard, BOB’S BURGERS is the latest attempt to find something new, within the familiar family comedy dynamic, but the show tries too hard to be crude and not hard enough to be funny.

This is the kind of comedy that would feel right at home on Comedy Central, but on network television, it feels dragged out and desperate.

The story follows a family-owned burger business called Bob’s Burgers. The patriarch is Bob Belcher, a somewhat dull-bulb who runs his burger joint with his overly needy wife Linda and his three dim-witted children Tina, Gene and Louise (who has the biggest potential to be the breakout character if they can just refine her a bit more).

The premiere episode concerns the grand re-re-re-opening of the restaurant, but since their younger daughter told her classmates that the meat is actually human flesh bought from the funeral home bodies next door, no one is showing up.

Not funny. Funny in a writer’s room, maybe, but as presented, painfully desperate.

The show takes an even unfunnier turn, when the health inspector shows up and refuses to test the meat to confirm its beef (and not man) as revenge for Linda breaking up with him many years before.

The animation is crude – more in line with KING OF THE HILL than what the other Fox animation block has been doing with their widescreen presentations.

Plus, the jokes really try to push the envelope, but come off uncomfortably wrong. For instance, Louise changes the name of the special burger of the day to “The Child Molester” since it’s a burger that comes with candy. Awful! Is that the best the writers could come up with?

The voice talent is also all over-the-map. Both Linda and Tina are voiced by guys, which, again, might have sounded funny in a writer’s room jam session, but on the actual show it’s jarring and not very clever or original. In fact, it’s almost distracting at times.

With new animation shows, it’s imperative to give them a chance. Some of them come out of the gate and take no prisoners – SOUTH PARK, THE SIMPSONS, FAMILY GUY. Others grow on you – such as KING OF THE HILL and THE CLEVELAND SHOW.

So with BOB’S BURGERS, maybe there’s more meat to this series than this pilot presentation delivers. However, if the show doesn’t pick up the pace and get funny quickly, it’s likely it will be the equivalent of the fast food Bob serves: it will be digested and excreted by the network faster than you can say “SIT DOWN, SHUT UP.”