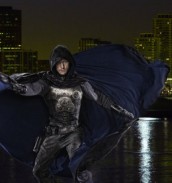 In all of the recent incarnations of TV superheroes, some sort of powers have come into play. The rights to BATMAN being tied up as they are at another studio, writer Tom Wheeler has come up with a new completely human hero, the Cape, who fights crime in fictitious Palm City.

Of course, the Cape wasn’t always the Cape. He started out, and remains in his heart, Vince Faraday (David Lyons), loving husband to Dana (Jennifer Ferrin), adoring father to comic-book-reading Trip (Ryan Wincott) and whistle-blowing officer of the law. This last is what gets Vince into trouble. Before he knows what hit him, he’s framed for heinous crimes and left for dead.

A circus troupe led by the theatrical Max Malini (Keith David) saves Vince’s life, but it turns out the circus performers use their various tricks and illusions to rob banks. Still, Max doesn’t like the Big Bads any more than Vince does – they’re bad for business – so the magician takes the ex-cop under his wing and shows him every last possible use for a performer’s cape. This allows Vince to become Trip’s favorite comic book hero, the Cape, as he strives to take down the villainous Chess (James Frain), who wants to privatize Palm City’s police department (shades of Blackwater). In his Cape disguise, Vince can also visit his family, who will be put in danger should anyone from his old existence know he’s still alive.

The premise is all very comic book traditional, but the tone has just the right mixture of seriousness and humor, not too campy, not too grim, and really pretty playful. Lyons is stalwart and exudes decency and Frain (recently crazy vampire Franklin Mott on TRUE BLOOD) is perfect as the dastardly but ever-urbane Chess. However, the standout here is David, who (after starring in countless voice roles, including the baddie in THE PRINCESS AND THE FROG) revels in Max’s showmanship, paternal pride in his gang and somewhat prickly ego.

There are echoes here of not only BATMAN but also the recent KICK-ASS, but they are agreeable; this feels like expansion of a subgenre rather than a retread. It seems worth checking out what Vince’s swirling cape and Max’s sleight of hand will get them into and out of next time.