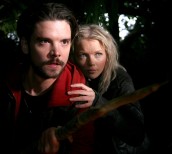 Connor (Andrew-Lee Potts) and Abby (Hannah Spearritt) are still readjusting to being back in the present following the events of the PRIMEVAL fourth series premiere, even though they already seemed pretty well over it last week. But never mind, they’re determined to pick up where they left off and carry on with the late Professor Cutter’s work on the anomalies. The problem is that Lester’s (Ben Miller) new financier and ARC co-manager Philip Burton (Alexander Siddig) is determined that only military personnel will take the front-line positions in the project from now on. Where does that leave our heroes? On their own and breaking every rule as they investigate a new creature incursion, of course! And along the way, Connor encounters an old friend (James Bradshaw), who knows a thing or two about all this dinosaur-rampaging business.

Following the lackluster return of the show with its fourth year opener, this episode manages to recover slightly by choosing a decent setting for the monster pursuit sequence that takes up almost two-thirds of the episode. Putting a tusked dinosaur amid the corrugated containers of a freighter makes for a nice labyrinthine, claustrophobic chase, and while it may not be as exciting as they hoped, the effects and action are reasonably up to par with past PRIMEVAL outings.

What really raises this episode above the humdrum is the return of Duncan, Connor’s old friend from the very first series, and someone that was permanently scarred by the anomaly project in a way that our regulars never really seem to be. Duncan saw another friend die, and now we find out that in the intervening years – much like the character Clive in the first episode of the new DOCTOR WHO – he’s been searching the Internet and gathering information on the ARC and all the creatures that have found their way into the present. He’s an endearing fellow for all that he’s suffered, which nicely balances the stereotypical geek material he’s given. The reunion also gives Potts something a bit more to do than his usual vacant, open-mouthed stare, and there are some touching moments at the end of the episode. Kudos too for the show not taking the most clichéd route and killing off Duncan. Perhaps we’ll see him again.

Apart from the welcome touch of character development and the decent chase scene, not much else happens this time around except for Connor and Abby getting their jobs back – did you really expect otherwise – and another, nearly identical “mystery” meeting between Matt (Ciaran McMenamin) and creepy Gideon (Anton Lesser). The dialogue suggests that Gideon may believe a member of the ARC team is going to pose a threat to the world in the near future, so unlike our former antagonist Helen Cutter, perhaps Gideon believes – rightly or wrongly – that’s he’s doing what’s right for humanity? We’ll surely see in the next few weeks.

There are some reasonable attempts at adding sexual tension with Jess (Ruth Kearney) pining after Captain Becker (Ben Mansfield) as well as inviting Connor and Abby to live with her in her improbably spacious and well-decorated home. On the other hand, with Burton around perhaps ARC salaries have gone up? For long-time PRIMEVAL fans (yes, there are), there’s even a fleeting return for good old Rex, the little winged lizard that Abby kept and that now resides in the ARC menagerie. Best actor on the show.