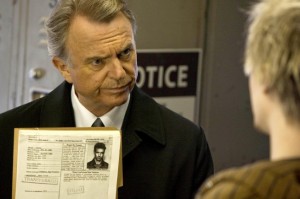 Whenever I see something about Alcatraz, I can’t help but think of THE ROCK. Just because it was sooo Michael Bay at his explosive finest and sooo over-the-top Sean Connery (and his quotes about doing the prom queen and generous use of expletives) that it makes for a great watch – not to mention batsh** crazy Nicolas Cage.

So throughout the two hour season premiere for ALCATRAZ I kept hoping that Connery would pop up at some point and quote some dead historian or curse out Alex Trebek or something. Sadly, it never happened.

ALCATRAZ is a bit like what happened when THE AVENGERS in comics became the THE NEW AVENGERS. A whole of host bad guys break out of a maximum security prison and the superhero group is tasked with tracking them all down one-by-one in order to protect the world. Of course, someone had to break them out or give them the means to do so and they did it for a reason … that being the main mythology to the overall storyline.

This show is nearly a carbon copy of that but with prisoners. When ALCATRAZ was getting set for closure, the inmates were to be rounded up and shipped to different prisons. That didn’t happen. Instead, they mysterious disappeared and are now re-appearing in the current timeline to carry out some sort of devilish deed for an even more mysterious “they.”

In the “Pilot” episode it sets the stage of what I described above with the first inmate re-appearing in modern time not having aged a day. Detective Rebecca Madsen (Sarah Jones) and Alcatraz historian Diego Soto (LOST’s Jorge Garcia) get wrapped up in a secret organization helmed by former Alcatraz guard that was on duty the day the inmates disappeared in Emerson Hauser (Sam Neill), who has set up shop in Alcatraz in order to hunt down the returning inmates in order to lock them up once again in his New (and improved) Alcatraz.

Much of what we get in the “Pilot” is unknown mostly because as a supernatural series giving away all the goodies at the beginning would ruin any future watching and make no one want to tune in for the payoff. And it definitely has the feel of LOST – where there are more questions than answers – not surprisingly given that Elizabeth Sarnoff is one of the creators and lead writers and produced 90 episodes of LOST and wrote nearly 20 episodes. Hell, they even brought in famed LOST director Jack Bender for the second episode “Earnest Cobb.”

There is also ample amounts of flashbacks – again very LOST-like – that actually really help tell the story in the first two episodes. I liked this as it not only harkened back to LOST but it also was a good way of explaining a bit more of the motivations of the inmates and why they may doing what they are doing.

Obviously, we don’t know how or why all the inmates from the 1960s disappeared or why they are re-appearing some 50 years later and killing people that this mysterious “they” have told them to kill. Or why Hauser has stuck around “a very, very long time” waiting for this whole chain of events to begin. But again, that’s at the heart of the mythology they are building and it is fine for now given this is just the start of the series.

One thing is for sure. They aren’t pulling any punches in the collateral damage as shown in “Earnest Cobb” – a sniper that was imprisoned in Alcatraz and one of the disappearing inmates now returned and taking out a host of random people in a series of sniper shootings. Brings a bit of realism to the show that supposedly is dealing with the worst of the worst coming back to the modern world to do damage.

Of course, the real question we get from “Earnest Cobb” comes at the end – SPOILERS! Stop reading if you haven’t watched – when we see that Lucy (Parminder Nagra) who has been the main assistant to Hauser in the first two episodes in helping to find out why this is happening is also someone that was in Alcatraz in the 1960s as a psychologist. So a non-inmate that was in Alcatraz also has re-appeared in the current time having not aged a day as well.

Now, this just gives more credence to the idea that Hauser knows a lot more than he is telling – although it certainly appears he does not know who is behind the disappearances and re-appearances. But he isn’t as clueless as Madsen he is giving off, much to what Madsen already believes.

Overall, the opening two episodes of ALCATRAZ were highly enjoyable. It is not your typical cop show nor is it an A-typical supernatural show where there are monsters and creatures coming out of the woodwork and some crack team tracking them down or whatever. Obviously, we’ll have the inmate of the week happening for some time in the coming episodes but as long as they continue to play up the overall mythology of the show it should be a fun ride.