The actor talks in depth about playing Boyd Crowder 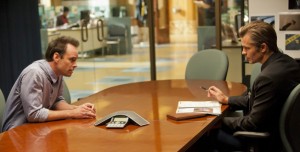 JUSTIFIED, which has its third-season premiere tonight on FX at 10 PM, has brought the contemporary Western back to life. Originally based on Elmore Leonard’s short story “Fire in the Hole” and expanded from there, the series has been nominated for pretty much every award going, with Margo Martindale winning a Supporting Actress Emmy for her performance last season as country crime matriarch Mags Bennett. Leonard, an active creative participant in the series, has a new novel out, entitled simply RAYLAN.

JUSTIFIED focuses on U.S. Marshal Raylan Givens, played by Timothy Olyphant, who has successfully made a life away from his roots in eastern Kentucky’s rural Harlan County. However, he reluctantly accepts the Marshal Services transfer back to Harlan, where he is confronted by a number of people from his past.

Foremost among these old acquaintances is Walton Goggins’ character Boyd Crowder, a performance that earned an Emmy nomination last season. Boyd worked with Raylan in the mines back when both were teens, but Boyd has since gone into his family’s business of crime.

Shot by Raylan, Boyd was originally supposed to die in the first episode of the series, but Goggins, and his acting rapport with Olyphant, were so electric that Boyd has survived to become a series regular – not that there’s anything regular about him. Boyd has tried his hand at becoming a spiritual leader, going straight, going back to outlawry, maintaining a strange bond with Raylan where either might kill or rescue the other in any number of dangerous situations.

Goggins, a native of Birmingham, Alabama, was already known to audiences for his performance as the compromised police detective Shane Vendrell in seven seasons of FX’s THE SHIELD. He also does many feature films, including last year’s COWBOYS AND ALIENS.  He takes time to sit down with ASSIGNMENT X during the Television Critics Association press tour to talk about what it means to play Boyd Crowder.

ASSIGNMENT X: Going into Season Three, did you think from where Boyd started, as a pretty horrible-seeming person, that he was going to turn into such a gray antihero?

AX: How do you think Boyd see himself at this point?

GOGGINS: I think for the first time in his life, he sees himself without judgment. I don’t think he labels himself one way or the other. I think that he understands that he is a criminal at heart. He was raised a certain way, his options were very limited because of where he came from and his lack of pedigree and [lack of] access to money, and I think that he may not have raised himself out of poverty – he’s raised himself mentally out of poverty. He’s a self-taught man and a troubadour and a leader and [he thinks] that. “In order to live, this is what I have to do because this is who I am, and there’s no turning back for me, but I can do it in a way that I’ve never done it before,” and I think that’s interesting.

Love has informed that, and his love for another person has informed this change in him, and I think his great compassion and empathy for other people has allowed him to move in this direction. So in some ways, he’s Tony Soprano meets Nucky Thompson meets Peter Pan meets Robin Hood. Any actor worth his weight in salt would just die to get to interpret a guy like that.

AX: There’s an episode where Boyd saves his own life and gets a lot of cash by double-crossing his partners on a mine theft job. They were trying to kill him, so he kills them, but he lets Shelby, the mine employee played by Jim Beaver, live, even though Shelby can identify him. That seemed very telling.

GOGGINS: Absolutely. And then Boyd goes home to Ava [the woman he loves, played by Joelle Carter], and he says, “People have been telling me this and this and this, and it’s taken me kind of listening to all of that to come up with my own definition for myself.” And it’s also a guy who hated his father [played by M.C. Gainey], as Raylan hates his father.

We mirror each other more often than we don’t. And there’s something between Boyd and his cousin Johnny [played by David Meunier] where Boyd sees his father for who he really was, and says, “Well, I might not have agreed with everything that he said; there was value in things that he said.” And for a character to be able to say that on television, to create a television show to give space for that, to allow space for that, is incredible. And so that’s kind of where he is.

AX: How much of Boyd is you interpreting what the writers have given you and how much, if any, is your input back to the writers?

GOGGINS: I think it’s a combination of both, but [executive producer/show runner] Graham Yost and his writing staff have opened up the opportunity for me to participate in a big, big way when it comes to Boyd, just as they’ve opened it up for Tim, not only to contribute to Raylan’s storyline, but to the storyline of the episodes. I think we’re all smart enough, Graham and the writers and all of us actors, to realize that it takes a village to try and emulate Elmore Leonard on a weekly basis. And that’s really hard to do. And sometimes we succeed and sometimes we fail, but the effort can never be criticized, because we’re all trying to get it right.

AX: You’re about to start filming on the historical miniseries TO APPOMATOX playing Richard Ewell. Your JUSTIFIED costar Nick Searcy is also in that. Do you know if you’ll be having scenes together in TO APPOMATOX?

GOGGINS: We don’t know yet, but I hope so. I’ve been a fan of Nick’s – I saw a movie that Nick directed [PARADISE FALLS] maybe ten years ago. I’ve been a fan of Nick’s since FROM THE EARTH TO THE MOON and before. He’s been around forever. He’s a journeyman and it’s just such a pleasure and an honor – we don’t get that many scenes together, but we show up on the same set sometimes.

AX: How was working with Margo Martindale as Mags Bennett?

GOGGINS: Look, I’ve been doing this for twenty years. Margo’s been doing it for forty. Nick’s been doing it probably for thirty-five or forty. And there are so many actors that are journeymen and journeywomen, and to see Margo, after having the career that she’s had, to see her [win an Emmy for her performance as Mags], to see her finally have in this role it took forty years to get to, for her to shine in that way – I was just grinning from ear to ear. She’s a lovely human being.

AX: Your characters were dead serious, but in your scenes together, there was a real sense of delight …

AX: Did you have to research anything, or are you still researching anything, to play Boyd?

GOGGINS: Anthony Hopkins is one of my heroes, as he’s a hero to so many actors. And a number of actors come through this way of thinking, of approaching the work, and that is you just live in your imagination. And I heard something about Tony that I found implausible until I worked with him [in the 2005 film THE WORLD’S FASTEST INDIAN] in Austin, and Tony reads the script two hundred and fifty or three hundred times. You just do the math of the amount of time it takes you to read a script and you multiply that by two hundred and fifty or three hundred times. And everything that he needs, more often than not, is in the story. There are specific things [to learn] outside [the script] – like I’ve never made shoes before or something like that, but you can learn. But everything is within the story. And so we did a movie together, maybe five or six years ago, and we had a wonderful conversation, and I really have employed that in my own preparation. I read every scene as many times as I possibly can afford to get in before we start. And so more often than not, all of my answers are right there.

AX: So you don’t necessarily ask the writer about their interpretation, you just work it out that way?

GOGGINS: Yeah. Because the writer’s on the set and if there’s something, if there’s a color – I don’t want to have a conversation with the writer beforehand, because then it becomes filtered in a way that doesn’t allow the actor to participate in the process – it’s not my interpretation. [My] interpretation will be Take One, and maybe Take Two, the writer steps in and we have that conversation. And maybe Take Three, the director steps in. And maybe Take Four, we’ve already gotten it between the three takes and [Take Four] is just for the love of doing what you do for a living and honoring the great acting spirits out there.

AX: You also got to work with Steven Spielberg in LINCOLN.. Who do you play?

GOGGINS: I play Congressman Wells Hutchins. He’s a Democratic Congressman out of Ohio, who was instrumental in the passage of the Thirteenth Amendment [outlawing slavery], and it’s an important part of the story.

GOGGINS: I’m trying to think of this quote by Thoreau – endeavor to live the life that you imagine and you will meet with success unexpected in common hours. That’s JUSTIFIED to me.