Home » Interview: Timothy Olyphant is JUSTIFIED on his FX series 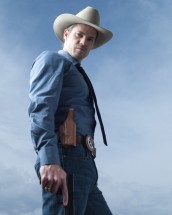 Interview: Timothy Olyphant is JUSTIFIED on his FX series

JUSTIFIED,  based on the work of Elmore Leonard and follows the travails of U.S. Marshal Raylan Givens, played by Timothy Olyphant. After a, well, justified shooting in Miami, Raylan is transferred (against his wishes) back to the place where he grew up, Harlan County, Kentucky. It’s not the big city, but to say life isn’t dull would be putting it mildly.

The FX series begins its second season tonight at 10 and star Olyphant is unmistakably happy about the series’ success and his work on it. 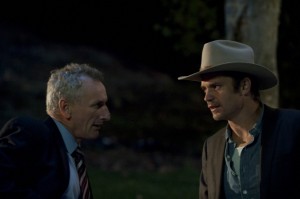 ASSIGNMENT X: Would you say you’re going through a law enforcement phase in your career? Right before JUSTIFIED, you played a small-town sheriff in the film THE CRAZIES and of course you were Sheriff Seth Bullock on DEADWOOD.

TIMOTHY OLYPHANT: No, I am not. Or yes, I am. I am in show business, and they have a long history here of making movies about law enforcement officers. And if you’re my age, and you’re male, and you’re trying to work, you’re going to run into those.

AX: But as opposed to the people the law enforcement people are chasing after.

OLYPHANT: As opposed to having a long run of playing dancers?

AX: As opposed to having a long run of playing people like, say, Boyd Crowder.

OLYPHANT: Oh, the villains. I haven’t played a villain of late. Have I?

OLYPHANT: Was that the last one? I was in it.

AX: And you were evil. Or blowing things up, anyway.

OLYPHANT: I had a cause.

AX: Do you enjoy the physicality of playing Raylan, where you’re running around outdoors?

OLYPHANT: I enjoy the whole thing. There’s nothing about this job I don’t like. It was just a great opportunity, I was thrilled to get my hands on it, and it’s a whole experience of being able to just act out the part and being able to participate in the direction of the show and every aspect of the show has just been a wonderful challenge. I’m very blessed to have been able to get into the whole thing.

AX: You are now one of JUSTFIED’s producers. Were you a producer on first season?

OLYPHANT: No, I just pretended to be one [laughs].

AX: Now that you are a producer, does that change anything in what you’re doing on the series?

OLYPHANT: They’ve created a monster. It’s really fun. It’s a lot of fun. There’s very little that I’m doing this year that I didn’t do last year. I think, if anything, we just have a deeper understanding of one another, especially [show runner] Graham Yost and I, in our collaboration, and I think that we had an opportunity this time to spend some time together and have conversations prior to the season beginning and he just knew what to expect and vice-versa, so I think it just really helped. When I see the first few episodes, I see the result of that, and I’m very proud of it.

AX: When the series was conceived, Walton Goggins’ character Boyd Crowder wasn’t originally going to be a regular. Do you think now it would be unthinkable to do the series without him as a foil?

OLYPHANT: Nah, we can get rid of Walton [laughs]. No, I adore the man. I love working with him. He’s a terrific actor. And in fact, all the actors this year are just outstanding, and I think with no disrespect to anyone in particular last year, I just think we have more really good actors this year. It feels like every part – the entire Bennett clan [this season’s primary antagonists] – Jeremy Davies, and Joe Taylor and Bradley Henke playing Doyle and Coover. The whole family, they’re all good – they all get the joke, you know?

Last year, we had some standouts like Jere Burns and Stephen Root, and I know Stephen’s back this year and I think Jerry is going to be back this year. But those guys in particular just kind of stand out as guys who got it. They could just hold the screen on their own, they got the drama, they got the comedy of it all. It feels like everybody this year is in on it. Margo [Martindale, who plays Bennett family matriarch Mags] is just turning cartwheels – it’s just great. It feels like a much richer world this year and I think the cast is responsible for a lot of that. 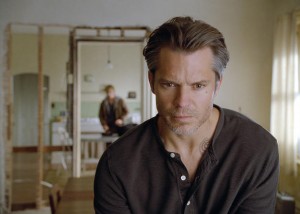 Timothy Olyphant in I AM NUMBER FOUR | ©2011 DreamWorks

AX: How was working on the science-fiction film I AM NUMBER FOUR?

OLYPHANT: It was a great job. It was lot of fun. D.J. [Caruso] was a lot of fun to work with and I play the part of Henri, who’s just bringing this boy along – he’s got a lot of trouble on his hands and trying to help him out. I think it’s going to be a big, fun movie. The audience it’s made for, I think they’re going to eat it up.

AX: What was one of the biggest surprises for you with Raylan?

OLYPHANT: Well, having an affair with your ex-wife is surprising. I told Graham, “Once we open that can of worms – you know, if someone comes to dinner and tells me they’re f*cking their ex-wife, we might not talk about anything else for the rest of the night.”  Elmore Leonard created an amazing character and I just try to fill it out. It was a joy to do, and I hesitate to say this because I would like to win awards one day, but it was pretty easy to do. I mean, when it’s that well-written and the way Graham picked it up and continued it, it just makes the job really easy. If the writing’s good, it just makes your job easier. That’s all. It makes it easier to understand. When the writing’s not good, it’s harder to memorize. It’s harder to figure out what you’re doing, because it just doesn’t track with simple understanding and simple actions and whatnot. In terms of the character itself, I find the character rather complicated and quite surprising. It’s what makes it so fun to do.