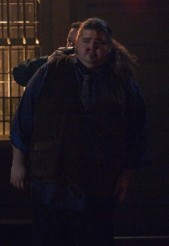 How much of a baddass is Emerson Hauser (Sam Neill) on ALCATRAZ?

The guy must be in his ’70s (if we are to believe he was 20-something when he first began as a guard at the prison), yet could care less if he’s standing on a land mine, he gets shot and brushes it off as if a flesh wound and gets blown up by dynamite only to grumble at Madsen (Sarah Jones) that she isn’t doing her job.

I love how Hauser just rubbed some powder on his gunshot wound and gave himself a dose of morphine (presumably) and was good to go. Better yet, the morphine seemingly has little effect on him only to dull whatever minor pain he’s going through since he just keeps going.

The guy is a 70-something Terminator.

Look, I know that in any TV show we gotta suspend disbelief, but are we really to believe a senior citizen is this tough? Just seems a bit much of a stretch.

“The Ames Bros.” was not as much of an abomination as the two previous episodes of ALCATRAZ, but when you are starting at the bottom it is hard not to go anywhere but up. Luckily, they also gave us more about the mythology aspect to the show, which has been all but absent from the show during the last two episodes.

In the flashback this week, the Ames brothers locked up in the big house together devise a plan to steal the gold they believe resides somewhere under the bowels of Alcatraz. So with the help of a guard that has turned to the dark side, they steal a key from Warden James (Jonny Coyne) that they believe unlocks the door where the gold is being hidden.

However, they stole the wrong key as it doesn’t unlock every lock on the sealed door and the warden has the other key. Needless to say, their plan is foiled.

Flash forward to present day and all three of the people involved in the plot are back and still trying to get behind mystery door No. 1. The interesting thing here is that when we finally get behind the door, there is nothing there. However, we see in the flashback that there was indeed gold in there circa 1960.

First off, this is a terrible turn of events because:

Having a big reveal about what’s behind the door with no pay off at all toward the longevity of the mythology of ALCATRAZ (unless it is mystical gold that transports inmates through time) is just a big waste of time.