Home » Exclusive Interview: ALCATRAZ star Parminder Nagra gets a piece of the Rock 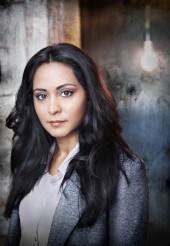 Exclusive Interview: ALCATRAZ star Parminder Nagra gets a piece of the Rock

The actress talks - as much as she can - about her enigmatic character on the new J.J. Abrams series 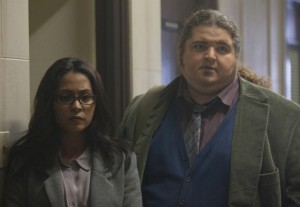 Ask Parminder Nagre a question about Fox’s new series ALCATRAZ, which airs Mondays at 9 PM, and the actress will burst out laughing. It’s not that she thinks the series is funny, but the idea of being interviewed about it is, since there is almost nothing she’s allowed to say about either the storyline or her character, Lucy Banerjee.

ALCATRAZ, executive produced by J.J. Abrams, has an enigmatic island at its center (a plot element Abrams has worked with before), but this time, it’s the site of the infamous maximum security Alcatraz Prison, which closed in 1963.

Historically, the prisoners were transferred to other penitentiaries, but in the show, all of the inmates vanished in one night – and are now showing up on the streets of San Francisco in the present, looking just the same as they did the day they disappeared and still full of criminal intent.

Nagra’s character, Lucy Banerjee, is part of a team, headed up by Sam Neill’s Emerson Hauser and including Sarah Jones’ Detective Rebecca Madsen and Jorge Garcia’s Dr. Diego Soto,  looking into this strange phenomenon. However, as we learn at the end of the second episode, Lucy herself was around in 1963, also looking just as she does now. What gives?

Nagra, a British actress who starred as the heroine of the feature film BEND IT LIKE BECKHAM and played Dr. Neela Rasgotra from 2003 through 2009 on ER, clearly would like to cooperate with discussing ALCATRAZ, but of course there’s only so much she can divulge.

At a party thrown by Fox for the Television Critics Association, this is what she tells us.

ASSIGNMENT X: What can you tell us about your character Lucy Banerjee?

PARMINDER NAGRA: I’m playing a lab technician. I’m playing Sam Neill’s right-hand person in Alcatraz. He’s a Federal agent and we’re investigating these happenings of people reoccurring from the 1960s who still look the same. And then they start meeting people who they were mad with who are older and they’re still their younger selves.

AX: So Lucy is an FBI lab tech?

NAGRA: Yes. It’s odd – it’s J.J. Abrams style, a quite mysterious character. I’m sort of a bit of both [investigator and lab tech] – I’m investigating these reoccurrences that are happening from people that disappeared in 1960 but are reappearing in the present day.

AX: How is it going from of playing a doctor for years on ER to playing someone who is in law enforcement?

NAGRA: Well, I was excited to do ER and enjoyed it, and excited to play this person as well. This is a slightly more mysterious character. I know a little less about her than I did about Neela Rasgotra. With Lucy’s character, I feel like I’m having to [have] conversations with the writers and just having to go with a feeling of that whole thing. I mean, it’s so complicated. And I’m trying to explain it really succinctly and it’s like … [laughs]. I think she has her own agenda. I think she’s going to be a really tough nut to crack. 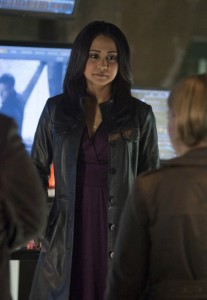 AX: When you go to the writers and ask them for background on Lucy, do they tell you what you want to know, or do they say, “We can’t tell you that”?

AX: Is there any difference between acting in a series like ER that’s very reality-based and playing a character like Lucy in ALCATRAZ, who is in a heightened reality?

NAGRA: I think you’re guessing a little more when it’s the heightened sense. You’re hoping that the net will just open up and you’ll sort of fall into the net and all will be revealed. Not just in terms of the character, but as Parminder knowing what’s happening as well [laughs]. I think it’s just wanting to know what’s being built, but I’m happy – it’s so nice, because in turn, I can go along for the journey myself as the character and with the audience as well.

AX: Can you talk about whether the episodes are closed-ended or arced?

NAGRA: It’s a procedural in so much as you’re going to meet a brand new [inmate/villain] character every week, but I think through that, you’ll start to sort of find out what the agendas are of Sam Neill’s character and my character and Sarah Jones’ character. Even though it’s a procedural, you’ll really get to have a feel of who the regulars are and what their stories are within that.

AX: How is it working for J.J. Abrams?

NAGRA: It’s an institution at this point. It’s pretty nice, I have to say. When you hear J.J. Abrams’ name, there’s a reputation that goes with that, and a pedigree, and to be involved with that is amazing.

NAGRA: I just finished an independent movie in England called TWENTY8K, which is a thriller set in the East End [of London].

AX: Is there anything else you’d like to say that you’re allowed to say about ALCATRAZ?

NAGRA: Just watch this space and I think you’ll be intrigued.