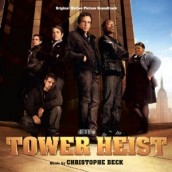 Christophe Beck takes the '70's vibe A Train to the Penthouse

Brett Ratner might not have the best tastes in p.c.-friendly sound bytes, but he certainly can make fun movies like three RUSH HOUR pictures, let alone have the geek love to get a legit movie jazz master like Lalo Schifrin to score those Chan / Tucker buddy cop pairings. For whatever reason, Schifrin’s not among the crew of TOWER HEIST picture that stands at the height of Ratner’s multiplex-pleasing skills. But if you can’t get the old pro, then a relatively Young Turk like Christophe Beck will do nicely. Beyond being the king of Hollywood’s party down, rock-funk sound with the likes of THE HANGOVER, HOT TUB TIME MACHINE and DUE DATE,  Beck has also proven his chops with such boisterously scheming jazz scores as TWO FOR THE MONEY, CONFIDENCE and RED.

TOWER HEIST shares their dangerously fun groove in spades. It’s main theme pretty much lays it all out- a mix of boastful brass, funk guitar and a stealth-action orchestra, topped off with glistening synth percussion that stands for the titular high-tech penthouse. It’s a sound of pure 70’s crime-jazz bliss, far more David Shire than Lalo Schifrin. Sure there’s the Bruce Lee-ready orchestral hits of ENTER THE DRAGON that filled the RUSH HOUR flicks. But any listener with a remote passion for 70’s cult classics will immediately recognize the mean-ass, brass-funk rhythms that propelled THE TAKING OF PELHAM ONE TWO THREE   That militaristic sound is all over this “Heist.” Except in Beck’s hands, the music is far more homage than steal.

Not only does Beck expertly recreate the seminal rhythms that have influenced far more soundtracks than this one, but he goes further to inject a healthy dose of rhythmic humor into the escalating plans of slobs vs. snobs. Except in this case, it’s a group of refined condo servants brought to street level vengeance to take down a Madoff-esque villain- as abetted by Eddie Murphy jive funk. Beck’s score is all about their ‘tude, music that plays this hapless bunch of wannabe thieves like the Clooney gang they dream of being. Beck deftly balances this combo of danger and hustle, creating real danger for the climactic heist, but with enough humor to let us know no one’s really going to get hurt. The result is a deft jam session of symphonic weight and popping excitement, a theme-driven rush that turns the penthouse of all evil into a cool ride on the retro-jazz subway car to rule them all.