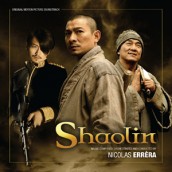 Composer Nicholas Errera (SLEEPLESS NIGHT) might hail from modern Paris as opposed to feudal China, but you’d think he was musically trained by Master Po himself, given the gentle sweep of SHAOLIN. Where many Hong Kong period action films rely on fancy percussive footwork, Errara delivers both the requisite drum hits and an unexpectedly gentle Zen spirit that’s got more than fancy rhythmic footwork on its mind.

Credit that to a story centered on personal transformation instead of gaining mad fighting skills, as SHAOLIN’s warlord undergoes a spiritual conversion in the company of the famed martial arts monks, As he meditates in their company, Errara makes thematically evocative use of the Erhu, a string instrument that’s China’s answer to the violin. Its emotional voice gently resonates with a lush orchestra for Errara’s West-meets-East musical approach, whose cues range from delicate, Asian-style piano and a lilting female voice to battle-ready symphonic brass and ethnic bell and bamboo hits. Dangerous when it needs to be, but mostly as beautifully sedate and flowing as water in an Oriental rock garden, SHAOLIN is as distinctive, and poetic as chopsocky scores get.