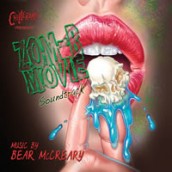 THE WALKING DEAD'S Bear McCreary has more fun with zombies

Though he’s done a crazed job on the hellbilly scores of the REST STOP films and WRONG TURN 2, Bear McCreary’s zanier supernatural tastes have been held in check to the point of brain dead-ness by the muted tone of the inexplicably popular WALKING DEAD series (a show whose initial promise has admittedly kept me in slave-like thrall).

Thankfully, the composer’s creative horror-scoring shackles were finally ripped off of this year for ZOM-B MOVIE music that makes for the wrap-around segments, and climactic gore-a-thon of the drive-in horror spoof  CHILLERAMA (check it out on Netflix instant). It’s a musical mash of sex-powered zombies whose grade-Z cheesiness make for A-level listening entertainment, especially if you’re as much of a horror score fanboy as McCreary shows himself to be.

McCreary’s hilarious pastiche is far more about the melodically chilling soundtracks of old as opposed the crashing noisiness masquerading as music that infects much of today’s horror product. 1950’s sci-fi Theremins mix it up with the electronic percussion of the great 80’s John Carpenter / Alan Howarth scores (along with the era’s more godawful synth tones), while the syncopated beat of Jerry Goldsmith’s GREMLINS  dance about with the more manic symphonic stylings of Danny Elfman- all complete with a Phantom of the Opera / horror host pipe organ for good cobwebbed measure.

Yet it’s spoof music with a nice, heroically emotional heart that holds the sillier stuff together. And while McCreary does a fun job with the rockabilly angst of “I Don’t Want to Die a Virgin” (which also marks the composer’s music video directing debut), McCreary’s one genre tribute that’s as coolly unexpected as it is bizarre is a 70’s Blaxploitation groove, complete with female coos about the sensuality of shit. This Schifrin-accented, jazz-funkadelic approach makes for a nearly twenty-minute bowel ode for “Deathication (Movement Number Two). Raya Yarbrough’s poetic lyrics are awesomely delivered Barry White-style by honkey Joshua Silverstein, creating a vibe that crosses a Miles Davis jam session with the svelte beat of John Shaft. It’s likely that neither would approve.

Also, be sure to check out the photo on the inside back insert of the CD tray to see a two big reasons that McCreary likely took this gig. It’s good to be the composer.