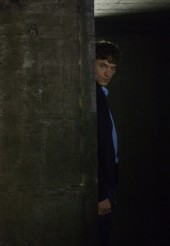 Another inmate of the week story that goes pretty much nowhere

I’m beginning to doubt the longevity of ALCATRAZ.

This isn’t a show like FRINGE or SUPERNATURAL that can give us compelling and cool experiments and weird s*** happening all the time in a non-mythology story or even two or three episodes that will stand alone and we’ll be happy.

The whole premise of the show is finding out why these inmates have traveled through time and are re-appearing and returning to their dastardly nature of committing acts of crime and murder that seem to be focused on getting into a vault or secret area of Alcatraz from the past. Without that one defining theme in each episode, it loses much of the appeal.

When those said “contained” episodes involve something completely dumb, it doesn’t help.

“Johnny McKee” is one of these craptacular episodes that contained little to nothing in terms of forwarding the mythology of the show and the storyline was just bunk.

In a nutshell, McKee was a chemistry geek that didn’t like getting bullied because when he was in high school he got his balls blown off by a cherry bomb. So, he decided to use his talents to good use by killing more than 70 people all for revenge. REVENGE!

Can it get more clichéd than this?

While previous inmates that have returned had some purpose from a mysterious “they”, the last two weeks have been just random acts of violence because boo freaking hoo my balls got blown off or the government only gave me a silver medal in the war (last week’s abomination of an episode). Not to say these are bad things but these are pretty lame excuses for committing mass murder.

So we go from having a defined purpose for these inmates returning and stealing either keys to unlock the vault/secret area of Alcatraz to the inmates returning, having no clue as to why they are back and instead of just loving the fact they have a new lease on life and are free, decide to kill mass amounts of people for REVENGE!

Speaking of which, one thing ALCATRAZ is not … low on body counts. Since this show has gone on the air, San Francisco’s homicide rate must have gone through the roof. Each week, we get a former killer from the infamous prison getting set loose on society once again only to end up massacring droves of innocent civilians in the process. “Johnny McKee” had at least 10 alone die at the hands of a guy disgruntled over anyone that gives him just a minor bit of lip.

Look I know that these guys are the worst of the bunch — cold blooded killers but are we to believe that because some dude wants a new towel from the towel guy that he’s gonna not only poison the water he swims in but take out five other dudes along with him? Seems like a major overreaction. Obviously, McKee’s elevator doesn’t go all the way to the top but even for a nutjob these seems like a bit overboard. Then to poison an entire train of people that did nothing to him at all because he’s following some Jules Verne philosophy is just plain stupid and lazy writing.

The flashbacks in this episode also just went to prove that McKee didn’t like bullies, therefore, just being a waste of time if not to show us anything different from what we already know.

Unlike last week’s ALCATRAZ where we at least got some bone thrown at us that gave us a few questions about the overall storyline happening, this had none. The only nugget we got was that Tommy Madsen, grandfather of Rebecca Madsen (Sarah Jones), was one of the inmates forced to give blood in high quantities. Oh and we got another awkward/setting up a romance moment with Hurley (Jorge Garcia) and the geeky morgue lady – yes, I called him Hurley because he’s the exact same character just not on an island, OK not on a big island.

Even Hauser (Sam Neill) had his own balls blown off in this episode as he didn’t have a growling or grumpy moment at all. At least give us a grumpy Hauser moment, sheesh.