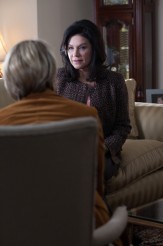 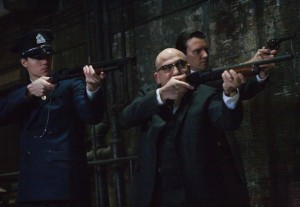 Fox burned off two episodes of ALCATRAZ on Monday, making my life hell since I gotta do both hours.

The first episode “The Ames Bros.” had a good deal of mythology and flashbacks that made it interesting to a degree even with the payoff being (at least for now) lame.

The second episode, “Sonny Burnett”, offered little to none of this and was more of the inmate-of-the-week centered on revenge.

Now, normally this wouldn’t be a problem if this show was grounded on procedural drama. But when the WHOLE POINT IS THESE GUYS ARE COMING BACK FOR A REASON RELATED TO SOME DEEPER MYSTERY … revenge does not fit in with the whole premise to the show. It is just killing time. It turns into a run-of-the-mill cop show where an angry 70-something, a chick cop and her portly nerd boy are chasing down criminals.

For the fourth inmate in a row that has been the subject of ALCATRAZ they have had no ties to the mysterious organization/being/person/they who in earlier episodes was releasing inmates for an actual reason.

Now maybe it will turn out that this is all part of the plan from “they” to create as much havoc as possible in San Francisco and kill as many innocent civilians as possible. But that seems a bit of a stretch, more than likely there just isn’t enough of a plan thought through in the mythology aspect to carry the show each and every week in this regard even if some of the earlier episodes just had some sort of a reveal at the end.

So Sonny kidnapped a 14-year-old back circa 1960 and received a $100,000 ransom for her. Believing that this girl was his partner, he told her where the money was buried once he was arrested. She stole the money and caused him to get shived in the big house and abused by the guards and inmates alike. As a result, Sonny turned to making himself buff and beating people up.

Sonny then decided to get revenge on his former kidnappee by killing her husband, creating mental anguish on her and burying her daughter alive.

This was pretty much all of the episode. What we did get from the mythology angle came from the analyzing of the blood of the inmates. Apparently, all the inmates are healthy. Beyond healthy and actually regenerate more quickly than a normal human should. Is this a product of whatever has caused them to not age? Or did the mysterious “they” inject them with something that would cure them of all that ails them?

Plus, Dr. Beauregard (Leon Rippy) said that not all of the inmates have this special blood but only those that were taken an interest in. The hidden meaning there is probably those that donated a good amount of blood in the infirmary are the ones that have the special blood. This may also be the explanation as to why not all of the inmates have a mission of some sort. But if that’s the case, why are they too returning, if they play no role in any of the events the “they” want to put in motion?