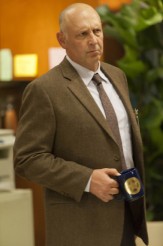 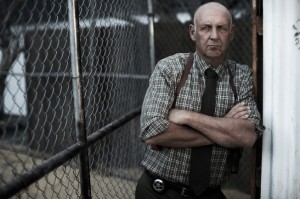 On FX’s award-winning hit JUSTIFIED, now in its third season Tuesday nights at 10 PM, Timothy Olyphant’s character U.S. Deputy Marshal Raylan Givens often exercises his own judgment on how matters of the law should be handled. However, even if Raylan doesn’t always listen to the man, he has healthy respect for his boss, Chief Deputy Art Mullen, played by Nick Searcy.

Searcy has played his share of bosses and law enforcement characters over the years – he was a deputy in his series regular role on AMERICAN GOTHIC and was a U.S. marshal in an episode of LINE OF FIRE. Searcy’s feature film credits include CAST AWAY, TIGERLAND, MONEYBALL and GONE.

Another significant role for Searcy was that of real-life U.S.astronaut Deke Slayton in the HBO miniseries FROM THE EARTH TO THE MOON. Among other things, the gig introduced Searcy to Graham Yost, who was one of MOON’s writers and supervising producers. Yost is now show runner/creator (adapting from Elmore Leonard’s short story FIRE IN THE HOLE) of JUSTIFIED.

ASSIGNMENT X: Neal McDonough and Mykelti Williamson, who have both joined the JUSTIFIED cast for Season Three, worked with Graham Yost on BOOMTOWN. Does he have a sort of repertory company going with all of you?

NICK SEARCY: Not really, no. FROM THE EARTH TO THE MOON is the first time I met Graham. So ever since then, we’ve sort of stayed in touch, and I’ve sent him emails over the years, going, “Don’t you ever think of me? Don’t you ever think of your old friend Nick Searcy? You don’t writing anything for me – I see everybody else, but you don’t write for me.” Finally, after relentlessly torturing him, I think he gave in and put me in this.

AX: When JUSTIFIED was first starting up, did they offer you the role of Art, or did you read for the part?

SEARCY: I think Graham had me in mind, but I did read for it once.

AX: Was the part further tailored toward you once you were in it?

SEARCY: [laughs] Well, I tailored it toward myself a lot, because I have a tendency to change words around quite a bit. As I’ve gotten older as an actor, instead of trying to adapt myself to the part, I try to adapt myself to me. I think it’s just a more honest performance. It’s not like my idiosyncrasies or my character don’t fit – they do fit. I’m just very fortunate in this role, and obviously because the part’s so good, pretty much my contribution to it is being true to myself. Actually, Art’s based on my father. I’m playing my dad. I try to keep that in mind while I’m doing it.

AX: Was your conception of Art to begin with the same as what Art has become?

SEARCY: Yeah. I would say so. I mean, I always had this idea of Art as being someone who understood Raylan exceptionally well. I think the way the character developed is very much like how I thought it would happen.

AX: Sometimes Art says things to the effect that he feels stuck with Raylan, as opposed to being glad to have him. Does Art mean that literally, or is he trying to subtly prod Raylan to behave in a certain way?

SEARCY: Yeah, I think he means it as a warning to Raylan. I think in a lot of ways, Art tries to impart some wisdom to Raylan, but I think Art is wise enough to know that people won’t do what you tell them, so he’s just trying to show him the best way he can that he should change his ways.

AX: Art is usually pretty controlled, but he can have a temper. Do you have discussions with Graham Yost and the directors as to when Art is going to show fire or do you just decide that for yourself?

SEARCY: Well, it happens naturally. I think it comes up as it comes up. We have a lot of discussions about a lot of things, but the scene comes in and Tim and I work on it and we play the scene. That’s the great thing about being an actor on this show is that they give us a little freedom and they give us the opportunity to really work those things out, so a lot of those decisions are mine, as much as an actor’s decisions can be his.

AX: How is it working with Timothy Olyphant? Do you just throw ideas back and forth when you’re rehearsing?

SEARCY: We’re always kidding that I don’t even read the scene, because it doesn’t matter, because it’s not what we’re going to do when we get there [laughs]. We do tend to chew it around a bit, and the writers are very gracious about letting us experiment, so if we come up with an idea, we just do it, and they say, “Yeah, go ahead and do it, and if we don’t like it, we’ll cut it out.” [laughs] So we’re allowed to play and Tim Olyphant is a really great actor to get in there and play with. It’s a real pleasure.

AX: Do you have any other scene partners that you’ve especially enjoyed on the show?

SEARCY: I love working with Jacob [Pitts as U.S. Deputy Marshal Tim Gutterson] and Erica [Tazel as U.S. Deputy Marshal Rachel Brooks] – most of what I do on the show is with them. The opportunity hasn’t arisen to be in a scene much with Joelle [Carter as Ava Crowder] and Walton [Goggins as Boyd Crowder]. There has been a little bit more with Natalie [Zea as Raylan’s ex-wife Winona Hawkins], but I just haven’t worked with many people as extensively as I’ve worked with them.

AX: Word is that we may find out some more of Art’s back story and that Art used to be maybe a little bit like Raylan himself?

SEARCY: A little bit. We’re not going into Art’s history or anything, but Art sort of displays some behavior that explains a lot, I think, in episode two [of the current season].

AX: If you as an actor have your own your back story for Art, how did he get to be where he is now?

SEARCY: Well, it’s a logical progression, working up through the ranks of being aU.S. marshal, I think. In order to become a chief, there’s a certain path that you follow and you make sure that you have experience in all the aspects of all the different duties that marshals have like property reacquisition and witness protection and all the different things that marshals have to do. Art just made sure he was steeped in all those things and he wanted to be chief, he wanted to be a career marshal.

AX: And he got to a point where he didn’t want to be out in the field any more, or it just wasn’t physically practical?

SEARCY: Yeah, both. I think you get to the point where you realize that it’s a younger man’s game. You get in a foot race with a fugitive, I’m not going to win it. So in order to get the job done, he’s got to pick his spots a little more carefully now that he’s older than he would if he was, say, thirty-five or forty.

AX: Where are you from originally in real life?

SEARCY: I’m from North Carolina. Cullowhee – it’s an Indian name, it’s near Cherokee, the mountains near Asheville. [The town is] small.

AX: Is the culture in Cullowhee similar to the culture that we see in JUSTIFIED’s Harlan County?

SEARCY: I think so, yeah. I mean, the funny thing about Cullowhee is that it’s a university town. So there are the university people, and then there are the [people in the] surrounding mountains, which are not unlike the people of Harlan County, people who live off the land or they grow their own food or whatever.. And I think a lot of that flavor is what I can bring to JUSTIFIED – it’s just built in in me. I’m from there.

AX: Did you do any research for the role of Art?

AX: What did you learn?

SEARCY: You get just a flavor. It’s not so much the facts, but you just get the flavor of the people, the kind of person who wants to become a marshal, the kind of guys that they are. And just from talking to them, they really do kind of have that swagger. The Raylan character is not that far off of the real marshals, because they do have that kind of single-minded purpose and “I’m going to get this guy” and they’re very clever about it. They walk with a certain bravado. It was great fun to meet them all and it definitely colored my performance.

AX: Do you have favorite episodes or scenes for Art that you’ve done so far?

SEARCY: Yeah, I love episode two this year [“Cut Ties”] and of course the episode last year with the slowest chase scene in television history {“Blaze of Glory”], where I’m chasing the old man with the emphysema tank – that was good.

AX: You’re in Sony Television’s new Civil War miniseries TO APPOMATOX. So is your JUSTIFIED cast mate Walton Goggins. Do you know if you’ll have any scenes together?

SEARCY: Well, I don’t know. That’s a project that’s in development still. I expect that we’ll probably have some scenes together and that will be fun.

AX: Who are you playing?

AX: Do you think there’s something about you that makes people cast you as people who are in charge of other people?