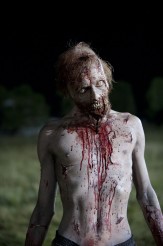 Dale tries to talk sense in a gut-wrenching eleventh episode 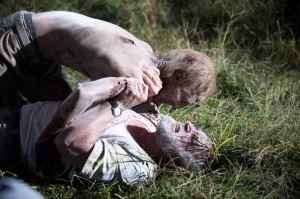 In the eleventh episode of THE WALKING DEAD Season 2, “Judge, Jury, Executioner,” the entire group is drawn into a day of discussion and despair as they face the very real prospect that civilization as they knew it is gone. Randall (Michael Zegen) represents a threat, and Rick (Andrew Lincoln) is nearly convinced that the newcomer must be executed to safeguard their fragile farm community. But he’s open to other opinions, and Dale (Jeffrey DeMunn) decides he has one last chance to preserve the values of the world they’ve lost. If he can’t…maybe it’s no longer a world worth living in.

Kicking off with a harrowing sequence in which Daryl (Norman Reedus) grills Randall for information, this episode offers one of the more shocking finales of any installment so far, especially since it means the departure of a character that has often served as the show’s moral center and had a far lengthier plotline in the original comic book series. Jeffrey DeMunn is a welcome presence in anything in which he’s cast, and it’s a shame that Dale’s horrific death signals the loss of a great member of the ensemble. The repercussions, however, could be excellent dramatic fodder for the remaining characters.

Ultimately, the lesson is that Dale’s bleeding heart approach and venting his spleen at everyone else (a bit of metaphorical foreshadowing?) just doesn’t work in this world. Yes, it means they can no longer call themselves civilized, at least not by our own present-day standards; in that situation, it’s called “facing reality.” In the post-apocalypse of THE WALKING DEAD, compassion is a luxury survivors cannot afford. Shane (Jon Bernthal) already understands how to move forward, and Rick seems to be learning.

This episode does return to this season’s penchant for conversation-heavy plotting, but although it is talky, it’s talk that matters. Throughout there are discussions that cut to the very heart of what makes this genre work so well. What makes us human? What do we value, and how might those values change when the towers of civilization fall and we have to face each other on rubble-strewn ground? “Who says we’re civilized anymore?” An episode entirely about conversations can be tedious and time filling, or in this case it can be a chance to regroup, to explore the state of things before the real terror begins. This is an episode that thrives on taking time to allow all the characters to talk to each other, occasionally in very interesting and unusual pairings, to see where all these personalities have wound up after nearly two years in Hell. If the group is broken, how is everyone feeling about it, and can anything be done to save their makeshift ‘family?’

Religion gets a look in via Hershel’s (Scott Wilson) acknowledgement that he was wrong, while Carol (Melissa Suzanne McBride) bristles at cold Carl’s (Chandler Riggs) rejection of her faith. Carl is a child of the new world, and he winds up motivating much of what happens in the episode’s finale. In the “stupid move” sweepstakes, he taunts a temporarily trapped zombie for no reason whatsoever, freeing the very creature that will later tear Dale to pieces. It makes no sense, unless we assume Carl has a death wish. When the terrible incident takes place, Carl immediately recognizes the monster responsible, so his sense of guilt may be something to watch in the next couple weeks and beyond. As for the death itself – why exactly was Dale patrolling alone in the dark?

Carl’s callous transformation also has a huge impact on his father, but arguably not a beneficial one. Having decided – rightly, I believe – that they should execute Randall, Rick is shaken to his core when Carl wants to watch; he can’t kill the guy and confirm everything that Carl is beginning to accept about the post-civilized world. While it’s a respectable, emotionally real decision, it once again puts Rick in a weak position as a leader. When the time comes, the only one who can deliver a bullet when necessary is Daryl.

One other nice story beat is the quiet talk between Hershel and Glenn (Steven Yeun), a touching moment in which an old man accepts the future and symbolically turns responsibility for his daughter over to another. It’s well played by both actors and one of the show’s warmest scenes.

So here ends the story of Dale. His final speech, in which he decries this new world as ugly, is not only a great last scene for DeMunn, but (possibly) a meta commentary on the departure of Frank Darabont and DeMunn’s own desire to leave. It’s a great episode to go out on, but things are probably only getting to get darker from here. Brace yourselves.

Oh, and apart from the fact he’s actually showing up on set and caught on camera, does anyone in the show remember that T-Dog (IronE Singleton) is still a living member of the group?