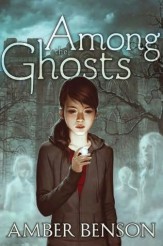 Amber Benson creatively does everything – and very successfully, too. Benson originally came to the public’s attention as an actress (Tara on BUFFY THE VAMPIRE SLAYER, an award-winning turn in RACE YOU TO THE BOTTOM), but she’s branched out as a filmmaker (writer/director/producer of CHANCE and LOVERS, LIARS AND LUNATICS), a novelist (DEATH’S DAUGHTER as a solo writer, THE GHOSTS OF ALBION books in collaboration with Christopher Golden), a radio play writer and a comic book author.

Right now, as a film director, Benson has DRONES, which she co-directed with Adam Busch, awaiting release. As an author, she’s got two new releases this year: CAT’S CLAW, the second installment in her DEATH’S DAUGHTER series and the children’s book AMONG THE GHOSTS. Sitting down in a small, pleasant Los Angeles eatery, Benson talks about all of the above and more in Part 1 of our exclusive interview. 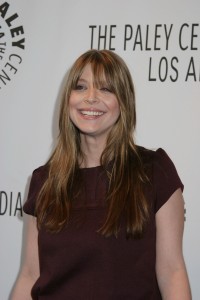 ASSIGNMENT X: Was AMONG THE GHOSTS originally known as THE NEW NEWBRIDGE ACADEMY?

AMBER BENSON: Yes. I’ve gotten so many people emailing me wanting to know why I’ve written two kids’ books at the same time [laughs]. “I was so inspired, I wrote two!” No, [the title] got changed. The publishers felt like THE NEW NEWBRIDGE ACADEMY wasn’t catchy enough, I think.

My editor Lisa Abrams and I went back and forth. I sent her a hundred options, she sent me a hundred options – literally, pages and pages of titles. This one sort of just happened. [The suggestion] was on their end. I really liked it. I felt like it was spooky and a little creepy and it captured the tone of the book, because it’s not a horror book; it’s fantasy, with ghosts and creepiness. So it caught the creepiness factor very well, I thought.

AX: How did you come to collaborate with your AMONG THE GHOSTS illustrator Sina Grace?

BENSON: I met Sina Grace at a Magnetic Fields concert. My sister and I went to see them and this kid came over and introduced himself and said that he went to Hi-De-Ho Comics. He had seen us there. And so we just started talking to him and it turned out he was getting ready to go to my sister’s alma mater, her school, and so they had stuff in common and we just became friends with him and found out how talented he was. He does his own comics. He went to Hi-De-Ho and they ended up putting out BOOKS WITH PICTURES, which is his series. Now he’s working on a bunch of other stuff, something that I love, which is called NOT MY BAG, which is a fashion-themed comic that I feel will really appeal to women. He is so talented. I [said], “I’m doing this book and I want to pitch it and I feel like illustrations would really sell the idea to the publishers.”

So we sat down and he just did a bunch of stuff for me for free. I didn’t know how people would use [the illustrations] – I told him I wanted to, because I love them so much, but who knows down the line what was going to happen? We got really lucky. My editor Lisa fell in love with the book and she felt like the illustrations only added to it, and so did I, so it’s a beautiful book. There are little drawn ants all the way through the book, and on pretty much every page, there’s an ant. They figure very much into the plot, so it’s really neat.

AX: Did you complete writing AMONG THE GHOSTS and then give it to Sina, or were you working together as the story was being written?

BENSON: I had written most of the book and I gave him what I had to read and then I finished it and gave him the rest of it, and he was working while I was working. And then I ended up doing three or four passes on the book, once Lisa [the editor] became involved. She was awesome – I felt like she really just shaped the book and took it to the next level, so many illustrations changed because of that, once things shifted in the book.

Sina was working the whole time I was working. It was pretty funny, because we had a miscommunication. I told him I wanted the main character to look like Dora the Explorer, I meant the look of her, and he thought I wanted all the illustrations to look like DORA THE EXPLORER, like a kids’ thing [laughs], so when he talked to Lisa Vega, who was putting together the look of the book, she emailed me – “Are you sure you want this to look like DORA THE EXPLORER?” I was, “No, no, no! I want the main character to have her look, but I don’t want it to look like a little kids’ book!” None of the illustrations he had done had looked like that – he had just told her that’s what I had said, so it miscommunicated through the grapevine. But the stuff was great. It really turned out well. I love the old-school fantasy books. All of them are black and white illustrations, so that’s why we chose that. I felt like to do full color would just sort of take away from the retro feeling of the story.

AX: Are they similar to, say, Tenniel’s original illustrations for ALICE IN WONDERLAND?

BENSON: They are definitely in that world – a little less busy. It’s a little starker. If you took the idea of Edward Gorey [artwork] and you mixed it with someone who does pop-up books, that’s kind of the vibe. LEMONY SNICKET’S A SERIES OF UNFORTUNATE EVENTS was a big influence, and the John Bellairs books – I highly recommend John Bellairs. Diana Wynne-Jones – those sort of retro, creepy stories, rather than very present-day, I wanted to give it that old-school feeling, Gothic at times. And the cover of the book is beautiful. Sina didn’t do the cover, [but] I think it really captures the feeling of the book.

AX: Is AMONG THE GHOSTS at all related to your DEATH’S DAUGHTER book series, or has it sort of gone completely different?

BENSON: It’s a very different story and the tone is very different, but they are connected, because it does take place at the school that [DEATH’S DAUGHTER protagonist] Calliope went to. And her best friend Noh is the main character of these books.

AX: So the school in AMONG THE GHOSTS has been the way that it’s been for a very long time …

BENSON: It was built around the turn of the century, during the early 1900s, and it’s been that way and it has a history. What’s really interesting and what I found really intriguing, is that the ghosts are all kids that attended the school and are part of the school. They never left. Something happened to them. Each one of them who figures in this book, they died at that school and they were never able to move on. And there’s something about the school itself – the guy that created it, who sort of gave the money for it, was an old-school amateur scientist. He had all these crazy contraptions hidden all over the school. I wanted science to play a part. I wanted to mix the idea of fantasy and ghosts, with a heart of science – science can give answers to some of these things, a little bit. So there are lots of interesting, weird subplots happening.

AX: Did you look at any photographs, movies, other books for inspiration for the feel of the school?

BENSON: Like I said, John Bellairs was a big inspiration, and then Diana Wynne-Jones. Her stuff is very British, but a lot of it takes place in different schools that have the same sort of a feeling that I wanted the New Newbridge Academy to have. But those were the two main ones, and A SERIES OF UNFORTUNATE EVENTS, definitely, because I love the narrator who commented on everything.

The narrator became as integral to the story as the cast of characters. I really liked that. [The look of the school is] very Gothic-y, stone, and each of the buildings was built by a different architect, like the girls’ dorm was built by one of the first female architects at the turn of the century, and she built the dorms to feel like Mediterranean – you could smell the sea – she had grown up going to the south of France and did a lot of her studies there and she tried to imbue it with the same sense. So each of the buildings had to have its own sort of aesthetic. 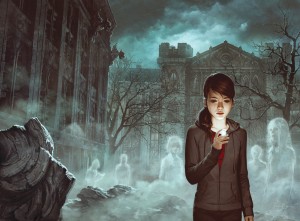 AMONG THE GHOSTS cover artwork

AX: Does AMONG THE GHOSTS take place earlier than DEATH’S DAUGHTER, which is set in the immediate present?

BENSON: It would ostensibly be set in the Nineties. I didn’t really deal with choosing a decade. I wanted this to have a timeless feeling.

BENSON: I think it’s a new writing style. First of all, it’s not first-person like DEATH’S DAUGHTER, which I think sets it very much apart from that. It is more in line with GHOSTS OF ALBION, because it is an omnipotent narrator, but the narrator comments on the books. The narrator doesn’t comment on GHOSTS OF ALBION. I like that Victoriana, that creepy sort of [commentary] – I try and inject a little bit of that into the book AMONG THE GHOSTS. I love writing for a younger audience. Maybe this is an odd thing to say, but I feel safer there. I feel like it’s a place where I need to be, rather than trying to do it – like it just feels natural. So I really enjoyed it. You’re dealing with innocence in a way that you don’t deal with in adult books. I appreciate that.

AX: What age is AMONG THE GHOSTS for?

BENSON: They say eight to twelve, sort of. I think it’s definitely in the LEMONY SNICKET world. That was my target audience, anybody who would read that would enjoy AMONG THE GHOSTS [laughs].

AX: Do people deal with you differently as a children’s author versus as an adult’s author?

BENSON: That remains to be seen. I’m just learning to delve into that world. I think there might be less cynicism in the children/young adults. I think in the adult literary world, there’s a lot of cynicism. People look to rip you apart. Rather than see what’s happening in the book, they want to find out all the bad things and comment on that. That’s not everybody, but I think there are a few bad eggs that do that. In children’s literature, even if they don’t love it, they appreciate what you’re doing and they appreciate it for its story, they appreciate the effort that went into it, I guess. Even if it’s not their taste, per se, they appreciate the work.

AX: When did you write this in the course of all the other stuff going on?

AX: Do you see AMONG THE GHOSTS as a one-off or as the start of a series?

BENSON: I love that world so much, I would love to do more in it. It remains to be seen, though.