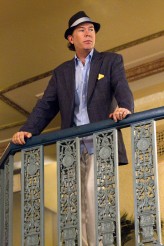 On the heels of “The Big Bang Job,” the first part of the LEVERAGE Season Three finale, “The San Lorenzo Job” has Nate (Timothy Hutton) and company heading in pursuit of Damian Moreau (Goran Visnjic) to the title island nation, where the dictatorial President Ribera (Alastair Duncan) holds sway.

San Lorenzo has no extradition treaties and Moreau bought Ribera his position, so it’s a safe haven for the criminal – or so he thinks. With an election coming but U.N. inspectors thick on the ground, Ribera has jailed all of his opposition, including Eliot’s (Christian Kane) old friend Gen. Flores – who refuses to be sprung from prison without his men.

With Moreau as powerful as he is, Nate says they must come up with a new con, even though Sophie (Gina Bellman) says there are no new cons. She may be right, as what Nate comes up with is a concept unfortunately familiar to most voters – stage-managing the election.

Hardison (Aldis Hodge) finds Michael Vittori (Gilberto Martin del Campo), a local schoolteacher who is the one man running against Ribera not in jail, a drug addict, a drug dealer or some other unsavory type. Vittori is a disastrous public speaker, but Nate and Sophie present themselves to him as his new campaign managers and start coaching like crazy. When the press asks who Sophie is, she puts on a local accent and declares that she’s a fellow schoolteacher and Vittori’s fiancée.

As the election starts swinging toward Vittori – with some help from Hardison, who is sending anti-Ribera email to every voter on the island – Ribera starts to freak out. Things only get worse when government troops assassinate Sophie, who dies in Vittori’s arms – it is of course staged, but neither Vittori nor the outraged public knows this. With the population on the verge of rioting, Ribera agrees to step down and accept a generous retirement settlement, arranged by Nate on the condition that Moreau be permanently imprisoned. Flores is happy to serve as new president Vittori’s advisor. Nate and Sophie are both feeling good that they’ve done something helpful for an entire nation of people. In a celebratory mood, Nate asks Sophie to share a drink with him – which leads to the two of them in bed together the next morning.

There are a lot of good plot threads in “The San Lorenzo Job,” but a few potentially big moments are reduced to footnotes. If a scene as large as Sophie’s apparent death is to be staged, shouldn’t Nate’s reaction fool us for a moment? He is, after all, with Moreau and Ribera at the time – he might want to at least try to make it look like he’s upset about the death of a colleague.

Also, the way the Nate/Sophie hookup is presented may work for people who couldn’t care less how the characters relate. However, for those who’ve been invested in their three-seasons-long courtship (which was enough to drive Sophie away at one point, because Nate wouldn’t get closer), the reveal of Sophie under the covers beside Nate without showing a deciding moment squelches the payoff. Subtlety is often an admirable quality, but this would seem to be overdoing it.

Even so, the overt playing with a political campaign has a lot of fun moments, and the grooming of the initially hopeless Vittori into a viable public figure is charming, especially when his honesty stumps Nate and Sophie.

“The San Lorenzo Job” sends LEVERAGE into its between-seasons hiatus on a high note, but it might have been even more enjoyable had it not pulled several punches.

CLICK HERE for a review of LEVERAGE – “The Big Bang Job”