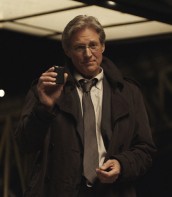 The actor chats about the new and old TRON, BABYLON 5 and his fans

In 1982, Bruce Boxleitner segued from TV to movies by starring in a ground-breaking new science-fiction film TRON where he played Alan Bradley, whose program (in his own image) named “Tron” aided Kevin Flynn (Jeff Bridges) in stopping an evil master control program that had more diabolical plans for the “user” world.

Now, 28 years later and Boxleitner has returned to the TRON universe, this time in TRON: LEGACY as a wizened Bradley who helps Flynn’s son Sam (Garrett Hedlund) inadvertently find his father who is once again trapped on the grid – this time of his own making.

While Boxleitner has enjoyed an impressive and eclectic career on film and television, it’s his science fiction work from TRON to the syndicated TV series BABYLON 5 (where he played John Sheridan) that has made him beloved by genre fans everywhere.

Boxleitner recently spoke with ASSIGNMENT X, in this exclusive interview, about TRON, his career and, of course, those adoring fans.

ASSIGNMENT X: Is it weird to see how far the TRON universe has come with the new film?

BRUCE BOXLEITNER: I loved the game grid in the new one. It takes me back a bit to when I was doing that. Even though we had the animated discs, the stuff that was coming at me, for the most part, and what I was throwing, was the real deal. I had guys throwing them at me, and guys who knew how to throw them too – and then they animated them falling off me. There is one shot in the original TRON where someone throws it at me and I actually caught it over my head and I look at him defiantly.

AX: Was there a part of you that wanted to do more of that stuff in this one?

BOXLEITNER: Really not anymore. I’m too tired for that. I was very impressed with Garrett’s physicality. I think he’s a great kid. I auditioned him for the movie. They hired me to do the screen testing with the young candidates for Sam. There were some really good young actors, and he’s the one, to me, who had it. He has a blend of vulnerability, the anger and he’s also physically a big kid. He’s a Minnesota farm boy. He has a big frame to him.

AX: Did you give him any advice after he got the part?

BOXLEITNER: I told him, “It’s TRON. I was bigger than I am now, and I beefed up for it. I ran six miles every morning before doing the show and I worked out for what we called ‘Working out’ then.’ So Garrett and I went to the gym in Inglewood, just because I wanted to get into camera shape. I wanted to lose some weight and Disney was paying for it, so why shouldn’t we do it. I would give him such sh*t, “come on, this is TRON here baby, you have to top me man.” And he would say “stop it, you don’t have to do this.” And I inspired him on. I’m very proud of what he did.

BOXLEITNER: I think it was a few years later, when Jeff is telling that part of the story. I think they got it right for the most part, as close as you’re going to get. They got my nose and jaw right and I think those are pretty prominent features on a man’s face. If it’s slightly off, it doesn’t work, you don’t buy it. I think they got it. They had a lot of material to use. 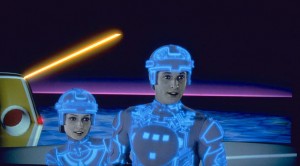 AX: Did you ever think you would be revisiting this some 28 years later?

BOXLEITNER: No. I said to my wife last night, “I’ve been in a lot of things that were like, baseball-wise, was a long ball and careened off the wall, but I think I’ve finally made my full-on home run.” And seeing the finished movie [of TRON: LEGACY], it was a home run. I think it’s going to do very well. Over the years, too many people have come up to me about TRON and it’s a vindication of the older movie. We got roughed up when it came out and it didn’t get appreciated by Hollywood. It was a hell of a summer, all those big movies coming out, and TRON held its own.

AX: Why do you think it left its mark?

BOXLEITNER: In the ‘90s, I was doing BABYLON 5 and especially going overseas doing the fan conventions, people were coming up with TRON memorabilia and saying, “will you please sign this. I love this movie.” It really resonated, beyond its initial release.

AX: Were you disappointed the original TRON didn’t do as well as it should have?

BOXLEITNER: It was kind of a bitter thing for me. I walked away from the movie, it didn’t do well. It did nothing for me. TRON was going to be my leap into motion pictures from television. You needed a leap then. Today you can do a movie and have a hit TV series. Look at [TRON: LEGACY’s] Olivia [Wilde], she has three movies coming out and she’s still on HOUSE. The younger one’s don’t realize, there used to be a barrier. You were a TV actor or a movie actor. Only one or two in a generation got to cross over, and it wasn’t me. I thought it was going to be my big break. I went right back to television and didn’t look back. It was a job. I did the job, done. I didn’t invest anymore into it emotionally, but now over the years, I’ve been so invested in it because of the fans. I didn’t realize it made such an impact with so many young people. I have people walking up saying, “I went into computer software because that movie inspired me as a boy.” If you touch people that way in your life, and have an affect on them, that’s a beautiful thing. 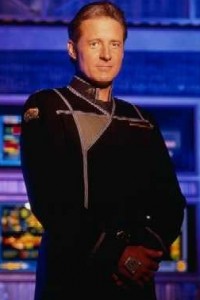 AX: Do you miss the world of BABYLON 5?

BOXLEITNER: I enjoyed that being on the outside looking in a little bit. We were the little space station that could. We weren’t the juggernaut of STAR TREK for Paramount. Warner Bros. could give a damn about us. They distributed us, but they left us alone, which was good. I liked it a great deal. It answered things for my life at that time. I could go to work and come home and be with my family at night. It ended at five years, and I was in four of them and I was in three or four of the movies. It had its ups and downs too, and sadly we’ve lost some very good friends and cast members, but I got embraced by science-fiction fans, and like country music fans, they never let you go. They love you and love you forever and they do. And TRON has always been up there. The two things, if I’m ever remembered for anything will be TRON and BABYLON 5.