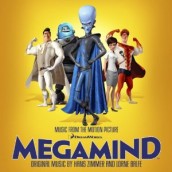 Though his one-time minion Heitor Pereria beat him to the supervillain scoring punch with DESPICABLE ME, Hans Zimmer gets the last laugh by actually seeing his similarly-themed, and equally fun MEGAMIND score (done in cahoots with Lorne Balfe) get an actual release on Lakeshore Records.

Sure, both flicks might have arches trumpeting their dastardly doings. Yet both DESPICABLE ME and MEGAMIND also show their uber-evil characters as big musical softies. In fact, MEGAMIND is downright sweet for the most part as its titular fiend’s baby bells mix it up with ersatz superhero bombast, music that plays Megamind as the good guy he’s always wanted to be.

It’s this sympathetic, excitingly melodic touch that helps distinguish MEGAMIND as the first truly “human” score that Zimmer’s done for Dreamworks after the funny animals of the studio’s SHARK TALE and KUNG FU PANDA. Once again propelled with a score with strong themes, Zimmer and Balfe deliver on the mad science and cosmic battles between the good and not so evil, while also providing lush, entrancing girly music that wouldn’t be out of place in a Zimmer romance like THE HOLIDAY.

If MEGAMIND and DESPICABLE ME can share a prize without blasting each other to smithereens, then it’s having their composers hear these over-the-top CGI toon characters as empathetic, flesh and blood people, even if their lackeys are yellow fuzzballs and a mutant fish And what would a comedy about an evil genius be complete without hearing George Thurogood’s & The Destroyers’ “Bad to the Bone,” let alone such now satirically hip numbers as Elvis Presley’s “A Little Less Conversation (as remixed by Junkie XL), Minnie Ripperton’s suffocatingly saccharine “Lovin’ You” or Gilbert O’Sullivan’s melancholy anthem “Alone Again Naturally?”

Get your not-so-evil groove on HERE