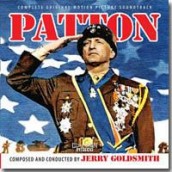 Jerry Goldsmith may have been an armchair general when it came to WW2, but it’s doubtful few composers gave as much glory to our fighting men, and their leaders with the likes of MACARTHUR and INCHON. Yet few of these outstanding Goldsmith scores have the immediately recognizable stripes of his 1970 Oscar-nominated PATTON, a soundtrack that defined the imperious can-do attitude of America’s most gloriously infamous officer.

Right from his unscored opening speech to his belief in reincarnation, George S. Patton wasn’t so much a military leader as he was a force of nature. And while PATTON’s music is most famous for its rollicking, patriotic march, Goldsmith truly earned his stripes here by getting to the deeper heart of the man, a solemn feeling of duty through the ages, as personified by reflective strings, a subtly religious organ, and the echo-plexed sound of trumpets.

While there’s somber, military honors to go around, Goldsmith also has Patton give a beating to The Hun by contrasting our bright, can-do military percussion against the dark, neo-Wagnerian brass of the Nazi machine, making for some of the most exciting war montage music to grace a film score.

It seems that there are have been as many releases and re-performances of PATTON’s score as there are parodies of its main theme. Now Intrada’s unlimited, two-CD issue finally stands as the mother of all PATTON’s, with a first disc that calls the original film tracks to revelry. It’s a listening experience that reveals the score’s thoughtful dramatic arch, along with a five-minute bonus track that shows Goldsmith endlessly trying to nail the sound of the echoplex.

The second CD is the true first for digital, as it hails Goldsmith’s own re-performance of the score for its original LP release, complete with George C. Scott giving the oft-quoted rallying cry for our troops to go rip apart the enemy, a speech that’s indivisibly tied in our memories to the sound of Goldsmith’s rollicking theme for Old Blood and Guts.