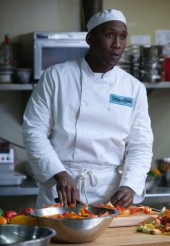 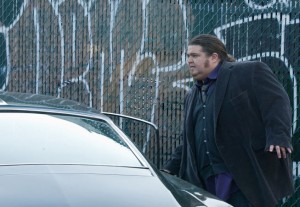 ALCATRAZ has fallen into the trap of giving us a reason for these inmates coming back from the past and into inmates just returning from the past for whatever reason to do ill will toward innocent civilians.

Whereas the first few episodes of the show, those that returned had a purpose, were sent on missions by someone or some organization and whatever damage they did along the way was justified. However, now pretty much every episode just has inmates returning and killing a bunch of people with the flashbacks telling us some more details of what went on in the 1960s inside the prison – which of course is much more interesting than whatever is happening in the present day.

In “Clarence Montgomery” the flashback deals with Clarence, an innocent man sent to The Rock after being blamed for killing his girlfriend, becoming the head cook in the prison cafeteria at the request of the warden who is trying to according to the head of the guards rehabilitate the inmates in some way. But it goes over very poorly as the white guys refuse to eat anything prepared by a black man. Because his short ribs didn’t go over well with the white guys, he gets experimented on by Dr. Beauregard in a very A CLOCKWORK ORANGE type of way complete with the eyes being pried open and images being flashed in front of him constantly.

In modern times, Clarence decides that he really is just a killer and decides to take out his frustrations from the past out on 2012 chicks by killing them in the same manner as he was framed for 50 years ago. Why would a seemingly good guy turn into a serial killer? Great question. Apparently, it was this psychological torture that did him in because he also killed someone in prison flashing on the images he was shown while in the torture chair.

What we did learn from “Clarence Montgomery” was that not only did he also have his blood taken but that the warden took the blood, put something into it, and then put it back into the inmates. Is this what is causing them to be controlled by the mysterious group after the keys that unlock mysterious door No.-1? Or is it something that is allowing them to travel through time? Or (more likely) is it something completely different?

We also still have no idea why Dr. Lucy (Parminder Nagra) was so involved with these same inmates and was trying to either help them if she was indeed trying to help them or how she could take away memories from inmates they no longer want.

I guess the main questions here are: If Dr. Beauregard was doing many of these nefarious experiments (with or without the help of Lucy), why doesn’t Hauser (Sam Neill) know about them since the doctor is on his payroll? Or does he just not realize that Beauregard is one of the bad guys? Maybe he doesn’t care or maybe the good doctor doesn’t remember his time doing these bad deeds. The other question is what was the goal behind the CLOCKWORK ORANGE torture? What was it getting them in prison? Does it have any connection to the other experiments happening in the prison in the 1960s or was this just something they were doing on the side?

In terms of the one-shot episodes that have been featured on ALCATRAZ this one was above-average. It had a pretty good story and gave us a bit more about some of the experiments that some of the inmates had inflicted upon them beyond just having blood drawn. Also it made us at least a little care about the plight of the inmate and what was happening to him – something that other episodes have done a poor job of doing.

Still, it would be nice to get some answers soon as I have said before, it is hard for this type of show to contain all of the questions without giving us some answers (unlike say LOST).