The actress talks about Ava's relationships with Raylan and Boyd 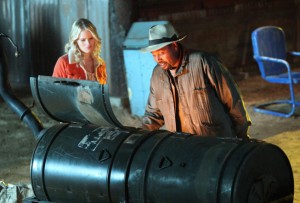 On JUSTIFIED, FX’s hit series now in its third season Tuesdays at 10 PM, a lot of the characters are passionate, strong-willed rule breakers. This is obviously true of the hero, U.S. Marshal Raylan Givens, played by Timothy Olyphant, and his onetime childhood friend and now sometime ally/sometime adversary, the outlaw Boyd Crowder, played by Walton Goggins.

However, Joelle Carter’s character Ava Crowder can and does give both men a run for their money in the gritty determination department. Ava shot and killed her abusive husband Bowman, who was Boyd’s brother. She then hooked up with Raylan for awhile, but now she and Boyd have entered into a relationship that seems to be succeeding on both the personal and illicit income fronts.

Carter recently participated as a volunteer reader in the Los Angeles-based Read-a-Thon for Learning Ally (formerly Recording for the Blind and Dyslexic), which creates audio textbooks for students who have difficulty interpreting print. The actress speaks with great enthusiasm about both JUSTIFIED and her character Ava, who is equally at home making a point with a shotgun or an aggressively-wielded frying pan.

ASSIGNMENT X: How do you feel Season Three is going so far?

JOELLE CARTER: It’s funny, because each season has kind of stood out, had a little different thing going on, and they’re really doing a great job of juggling so many storylines this season and keeping them strong.

AX: Is Ava a character in the JUSTIFIED source material, Elmore Leonard’s short story FIRE IN THE HOLE, or is she a creation of JUSTIFIED show runner Graham Yost?

CARTER: No, Ava was in the original short story that they adapted into the pilot, so she is a creature of Elmore Leonard.

AX: Did you get anything out of the short story in terms of ideas for how to play her?

CARTER: I got a lot out of the short story. I mean, that character was fully developed in that story and they just let her flourish throughout the seasons.

AX: How would you describe Ava?

AX: Not that Ava has ever been remotely unassertive, but is she getting a little more of business savvy this year?

CARTER: Yeah. I think, and I am always surprised, Ava’s always discovering new strengths that lie within and she is going to step up and she’s trying to step up to be [Boyd’s] partner in crime, not just a partner in life. 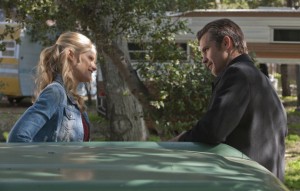 AX: Is Ava able to manipulate Boyd at all, or is that something she’d even want to try?

CARTER: I’d like to think Ava can manipulate Boyd, but I don’t think she would do it in that way, because it’s such a loving relationship, there’s so much respect. I think she can only encourage him.

CARTER: I think when Raylan came along, Ava was so damaged and spinning in a way, like in a fog, and he was a light that she saw and she went for it. And I believe they needed each other then and they had a great thing, but with Boyd, it was more of a nurtured kind of growing respect and love, and so there’s a lot more there, familiarity and also grounding.

AX: And she seems like she’s sort of basking in the way that Boyd is a true gentleman towards her.

CARTER: Oh, yeah. I don’t think she’s ever had that. It’s the same kind of man that’s she’s always been attracted to. He’s dangerous, but he’s not hitting her. He’s gentle and kind and loving and manly.

AX: Ava is very handy with firearms. Did you know how to handle guns before you got this part?

CARTER: Not really, but the guys on the set have been really helpful with taking me out into a field and showing me the proper way to hold and shoot and what the right pressure in your body would be and how you would react to shooting a shotgun. So I’ve learned a lot about shooting – I’ve been to a couple ranges.

AX: Do you enjoy that, or does that make you nervous?

CARTER: I think guns make me nervous in general, but it’s kind of fun and you feel powerful on that side of the gun.

CARTER: There’s a film I did, CITY OF JERKS, that is coming out. Phedon Papamichael directed it, so it’s going to be good.

TV Review: BEING HUMAN - SEASON ONE - “The End of the World As We Knew...
TCA News: CBS addresses (briefly) its lawsuit against THE GLASS HOUSE
TV Review: DALLAS - Season 1 - “Family Business”
Movie Review: THE GOOD LIAR