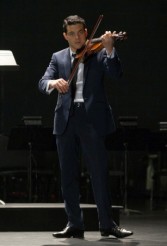 Dr. Lucy is shaping up to be the most important character on the show

While the modern plotline in ALCATRAZ was damn lame, it was the flashback and side story that gave us the most entertaining aspects this week.

The key issue about “Webb Porter” is that he has a matching blood type that will save Dr. Lucy (Paraminder Nagra) from being forever in a coma after getting shot in the early episodes. This is important to Hauser (Sam Neill) because they were lovers in the past (although the whole her not aging thing/or being transported through time may be a wrinkle in their relationship) and obviously her past workings with the inmates returning.

Porter (Rami Malek) and Lucy are very well connected from the flashbacks we see in this episode as it was the good ole doctor that turned him onto the violin and to expressing his past and his torment as a child of being held underwater through music. That’s a nice theory to get him some rehabilitation but when Porter uses the violin to murder women in order to steal their hair to make a better playing violin in the present day, that whole psychology thing sorta backfired.

We still don’t get Lucy’s whole place in this series from the past. On one hand, we see her trying to help the inmates and trying different techniques in her “bag of tricks” to get them help. On the other hand, she has done the dirty work for Warden James (Jonny Coyne) in getting what he wants. Was she just an innocent doctor trying to help out troubled inmates? Or was she after something more and part of this whole scheme of drawing the inmates’ blood and replacing it with blood tainted with silver – which presumably has something to do with their time traveling capabilities.

Obviously, the series has been leaning toward the importance of Lucy for some time here and there but this episode really hammered that idea through, even with Hurly (Jorge Garcia) and Madsen (Sarah Jones) learning that she is indeed one of the time travelers. Madsen went so far as to say she “may be the key to all of this.”

The bit with Lucy and Porter was some of the best parts of this episode considering the stuff happening in modern times was a bit kooky to say the least – a dude cuts off the hair of chicks in order to make his violin sound better. It continues a rather stupid series of plotlines where the inmate returning as some lame shtick for killing people. But I can let it slide if it will get the series in position to deliver on the two-hour season finale next week.

And boy does it need delivering. There are way too many questions that haven’t been answered that need to be answered because as I have said before, this show is no LOST. It can’t rely on just not telling anyone anything for the longest time because it is set in civilization where the rules are concrete and you can’t just have a smoke monster flying about or mysterious hatch for an entire season.