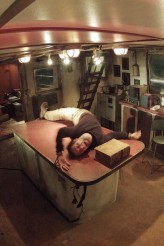 Another really good episode, this time featuring an exorcism and satisfying cliffhanger should it get renewed for Season 2 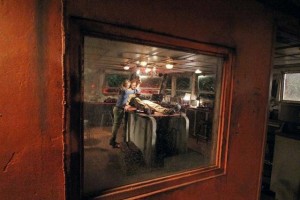 As THE RIVER leaves us with its first season finale, “Row, Row, Row Your Boat,” several things have become very clear.

One, the central mystery of finding Emmet Cole (Bruce Greenwood) has been resolved. Done.

Two, the series seems to have found a way to do a different horror movie each week while still dealing with the show’s overall goal.

Three, at eight episodes, it’s the perfect length for someone to get invested in a genre show, with little of the fat in between.

That said, THE RIVER has not been a ratings bonanza for ABC, but the upside is, even though it provided a simple enough two month way station in between DANCING WITH THE STARS seasons. Is that enough to warrant a renewal? Probably not, but it would be a shame if they didn’t give the series another eight episode go next year.

“Row, Row, Row Your Boat” deals with the aftermath of finding Emmet Cole and what that means. While many of the questions regarding what he was doing out there exactly – particularly in regards to “The Source” and what he knows about the mysterious symbol on the back of the neck of Lena Landry (Eloise Mumford) – it’s still nice to see him back on the Magus and interacting with the show in the present tense as opposed to flashbacks.

Soon, one of our main characters is killed – but not by supernatural means. It’s an assassination by a fellow crew member. Lincoln Cole (Joe Anderson) is the unfortunate casualty. He’s shot and dies, but then mom (Leslie Hope) decides to use the power of the supernatural to bring him back. With the psychic link to the other side of Jahel (Paulina Gaitan), they resurrect Lincoln, but now he’s possessed by the spirit of Boiuna who wants Emmet to pay for coming for its magic.

We get some warmed over THE EXORCIST theatrics, which work okay. Ultimately the power of love wins out (or does it), but the mechanisms actually work quite well. It’s a nice wrap up to the story, since it’s about Emmet being a lousy father and having to learn to be a good father to save his child. 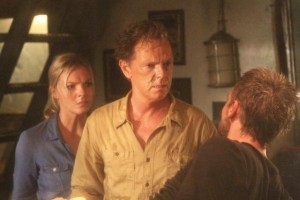 Of course, there are other mysteries percolating. Shady bodyguard/security Capt. Kurt Brynildson (Thomas Kretschmann) has his own issues and past with the Bouina and also aids in stopping the force possessing Lincoln.

We also learn that Jahel’s mother had a similar psychic gift – which makes her even more of an asset to the crew now that the cliffhanger has been set into motion.

So what is the big twist? It’s a simple one, but just as the crew of the Magus think they’re finished with their journey and are about the leave the magical Bouina, the landscape starts changing. Their exit point no longer exists. The landscape is been manipulated by magic to trap the crew and make sure they never leave.

Cut to black, end of season and a nice set-up for Season 2, if there is a Season 2.

While there were a handful of uneven THE RIVER episodes, when the show got it right, it was proof you could mix anthology and standalone stories in a satisfying way (case in point last week’s excellent “The Experiment.”).

I think it was a little bit of a cop-out that there weren’t more casualties with the main cast over the course of the eight episodes, but that’s forgivable.

THE RIVER was a grand experiment, trying to bring found footage horror elements into a weekly scripted series and it succeeded for the most part. Again, I would really love it if ABC found a way to give it another try. They gave the horrid V a second season even though it didn’t deserve it. THE RIVER has potential to gain an audience via DVDs, downloads and streaming which could make a second season viable, especially if they keep the episode order down to a manageable size.

If this is it, then the eight episodes of THE RIVER make up one pretty solid whole, with an ending that is par for the course if this were indeed an eight hour movie versus a TV series.