The actor talks his shocking departure from the series, plus working with Spielberg 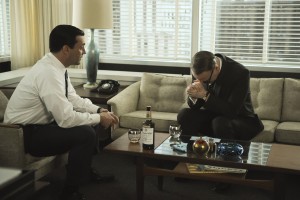 Alas, Lane Pryce. The intriguing if not always sympathetic character on AMC’s MAD MEN, a tamped-down financial whiz who turned his back on his bosses back in England to join with the upstart leadership of the breakaway new ad agency made more than a few mistakes that came back to haunt him. After three seasons on MAD MEN, Pryce made a statement to his erstwhile colleagues in Sunday’s episode “Commissions and Fees” – by hanging himself in his office.

Actor Jared Harris, who has played Pryce Seasons Three through Five of MAD MEN, knows how to keep a secret. He did all sorts of press for the show when Season Five launched. Despite the fact that filming on the season had been completed well before this, Harris never let on about his character’s dramatic fate, going so far as to avoid auditioning for any pilots this year, because such activity would tip people off that he wouldn’t be on MAD MEN next year.

Not that Harris is desperate for work. The British actor just completed a multi-season arc on FRINGE (which ended with his nefarious character David Robert Jones being dispatched by the main characters) and is awaiting the release of Steven Spielberg’s film LINCOLN, which has Harris playing Ulysses S. Grant. Last year, he costarred as the villainous Professor James Moriarty in SHERLOCK HOLMES: A GAME OF SHADOWS.

This interview is a combination of an in-person private conversation at an AMC event promoting MAD MEN before the current season launched – the season finale this coming Sunday – and a telephone conference call that took place after the episode with Lane’s suicide aired.

ASSIGNMENT X: Why do you think Lane killed himself in the office?

JARED HARRIS: It was vindictive. He was angry and it was an expression of his anger. It was a passive-aggressive act, and his choice of doing it there was a f— you to the office, to the people who work there, particularly to Don [played by Jon Hamm]. The passive side of that was in the boiler-plate suicide note, which explains nothing. So he’s trying to dig a hole for the people, particularly Don, to make them feel bad about what they’ve done. It was a cowardly thing to do. He did it to try and hurt them the way that he feels they’ve hurt him.

AX: When did you find out that Lane was going to kill himself? How did you feel about the plot development?

HARRIS: Well, you’re not given the choice about whether you’re on board with it or not. It’s [MAD MEN creator/executive producer/show runner] Matt Weiner’s show. It’s his vision. The man’s dramatic storytelling abilities are unquestionable, so you don’t question – you wouldn’t start [questioning] now.

He told me after the read-through for Episode Ten [of Season Five]. After the read-throughs of every episode, he asks everyone to hang around, so that he can speak to you and give you notes, because he’s going to be working [in the writers’ room] during shooting, he doesn’t always get down to the set. I could see that he was leaving me for the last person. And then he said, “Let’s go up to my office,” which I knew wasn’t a good sign. And then he offered me incredibly expensive brandy, and then I knew this wasn’t going to go well. And then he said, “I have something I want to talk to you about.” And I knew at that point. I went, “That doesn’t sound good.” And he went, “It’s not. I’m really sorry.” But he explained why he wanted to do it. He’s really been building up to it for the season. And I could see, from an acting point of view, it was to my benefit to go out with a bang rather than a whimper.

At the same time, I know that MAD MEN is just getting bigger and bigger as it builds towards Season Seven. There’s already an obsession with Season Seven. And I’m sad that I won’t be a part of that, of that build of the show. But then again, I joined late [in Season Three].  So there’s no reason why I should be. I’m very, very lucky to  have been a part of it. 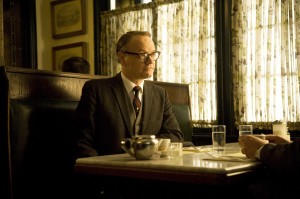 AX: Had Lane not killed himself, did you envision what he might do instead?

HARRIS: Yes. Someone asked me that awhile ago. I think that he imagined if they could just get over this hump that they’re in [with Lane having embezzled funds from the company], they’re slowly digging themselves out from these financial problems they’ve lurched into. And things seem to be going good, and then they lose Lucky Strike, and they have to downsize again. And then things seem to be going well again, and if they can just get a break, then they’ll be on good firm footing and his personal financial things will be cleared up. I think that’s what he saw, that he believed it would still work out for the company and that he would be a part of that success. On one level, it was already a success for him, because his name was on the door. He was no longer working for other people. He was working for himself in that sense.

Personally, Jared Harris envisioning where Lane would go – I didn’t think about that sort of stuff on this show, because there’s no point getting attached to ideas. You don’t know what Matt’s going to decide, and it’s his vision. Since I just signed a three-year contract [with MAD MEN], I did not think I wouldn’t be on for Season Six. I am extremely happy that I got to go out in such a big and significant way, with such a great effect. That part I can see is only beneficial and I’m lucky that [Weiner] entrusted it to me.

AX: Lane was sort of not part of the whole team …

HARRIS: Not initially. He’s tried to make himself invaluable to the company. There’s always some guy who has – it’s a boring job, isn’t it, the guy who figures out how you stay afloat and how close to the [financial] edge you are. It’s not a glamorous job, but every company has someone who does that.

HARRIS: When I started in Season Three, one of the questions I asked was, “What is his marriage like?” Because it’s such an important theme in the series. And they said, “Oh, he has a good marriage.” And then the next episode, I discovered that [Lane’s] wife hates living inNew York. So of course I said, “How can he possibly have a good marriage? If half of your partnership doesn’t want to be there, then you can’t be properly happy.” And of course, what they meant was, “He’s not f*cking around on her.” So I thought that he’s not adventurous in that sense, he’s a very loyal person, he’s a kind of dutiful second lieutenant-type person, who carries out orders and doesn’t question them. He has his own private reservations, but he won’t question the big bosses. And I’ve taken that conflict inside, because Matt gives you an idea, an understanding that someone has to do something that they might not believe in or think is the right thing, but they don’t have the power to change it. 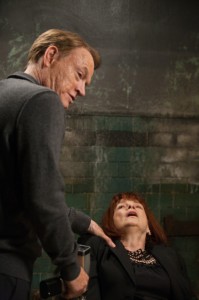 AX: Do you have a favorite scene in MAD MEN?

HARRIS: It would have to be the fight [with Pete, played by Vincent Kartheiser]. And the Jaguar not starting [when Lane tries to asphyxiate himself]. I laughed my ass off when [Weiner] told me the Jaguar wasn’t going to start. I just fell off the chair laughing. This season aside, it would be the episode with Don, where we go out on the town. I think for the first time, the audience is allowed to see Lane as a human being, rather than someone who does a job in an office and in an adversarial relationship with a character whom the audience has loved.

AX: You do a lot of projects that are set in the past. Lane Pryce in MAD MEN, Andy Warhol in I SHOT ANDY WARHOL, Moriarty in SHERLOCK HOLMES …

AX: How was working with Spielberg?

HARRIS: The guy is amazing. I’ve said this a couple of times, but he’s really an incarnation of Newton’s Laws of Motion. The man has such passion and excitement and enthusiasm, and he derives such a palpable pleasure from filmmaking, it’s a thrill to be on the same set as the man. He could probably do most of the jobs around the camera himself. The guy’s knowledge of filmmaking and of movies is encyclopedic, and he will discuss shots with his d.p. [Janusz Kaminski] and go, “Remember that shot in RED RIVER where they’re going with the horses, and this and this happens? This is kind of like that shot.” He has this lexicon of film shots that he references. There’s a “shot language” that [Spielberg and Kaminski] have with each other.

AX: And how is working with Matthew Weiner? 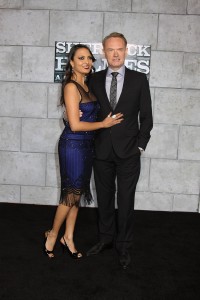 Jared Harris and Allegra Riggio at the Los Angeles Premiere of SHERLOCK HOLMES: A GAME OF SHADOWS | ©2011 Sue Schneider

AX: Are you particularly drawn to characters in period projects, or is that just how you get cast?

HARRIS: No. Certainly, as an English actor, you have access to period stuff. I think directors and casting director and producers feel that British actors, because of their training, have a familiarity with playing period characters and wearing the period dress and selling it. So that probably helps as part of it. It’s not a thing that I’ve gone out of my way to say, “I won’t do any modern stuff.” It just pans out that that’s what I’ve been cast in.

AX: And some of the feature film material is –

AX: Is it nice to go out and do all of the films with all of the explosions and the big adventurous stuff, and then come back and do the more nuanced material like MAD MEN?

HARRIS: I love the fact that I’m in this giant blockbuster movie that’s [made] tons of money and everyone’s seeing it, so that helps me. There are different challenges. On this show, the opportunity of doing a TV show like this, which is sort of like long-form, what it gives to the [actor] is that you can really study characters in depth. Quite often, [TV shows] don’t do that. [Weiner] is doing that, he has done that. It’s a unique opportunity. So yes. That part is fantastic. And the difficulty when you work on big movies is they hire twenty writers, so it’s really up to you to try and nail down who this character is going to be. So you have a lot more responsibility and there’s a lot more riding on it. So it’s a kind of hairier situation.

AX: Is there anything else you’d like to say about the MAD MEN experience?

HARRIS: The atmosphere and the camaraderie on the set, the relationship between the crew and the cast, the production staff, is the best I have ever experienced on anything I have worked on.