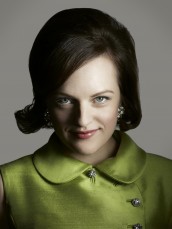 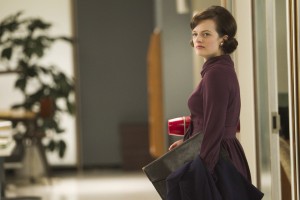 AMC’s series MAD MEN, now in its fifth season Sundays at 9 PM, has some things in common with its character Peggy Olson, played by Elisabeth Moss. When MAD MEN, created by Matthew Weiner, began its run in 2007, no one knew that it would turn out to be an award-winning juggernaut. Likewise, when Moss’ Peggy joined the Madison Avenue advertising firm then known as Sterling-Cooper in 1960, no one foresaw that she would become the company’s first female copywriter and one of the strongest people there.

Moss has been nominated for the Supporting Actress in a Drama Series three years running (2009-2011) for her work as Peggy. The Los Angeles-born actress made an impression on TV audiences in her role as President Bartlet’s daughter Zoe on THE WEST WING and had an entertaining turn as a psychotic young alien on INVASION. Olson is currently working on the New Zealand miniseries TOP OF THE LAKE with costars Lucy Lawless and Holly Hunter for writer/director Jane Campion, but she took a few moments at a party thrown for the press by AMC to talk about MAD MEN. 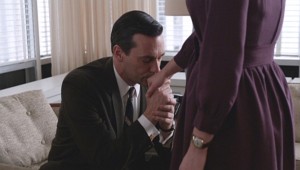 ASSIGNMENT X: Given that you weren’t born until the Eighties, did you go into MAD MEN knowing anything about the Sixties?

ELISABETH MOSS: I’m not as educated about the time period as Matt [Weiner] is, so for me, a lot of what I know about that time period is from the show [laughs]. The period is great. I’m so used to it now that I actually kind of forget sometimes that we are shooting a period show – it’s just the way we shoot MAD MEN.

AX: Sexism among the characters is very overt on MAD MEN, especially during the early seasons, despite Peggy’s career trajectory. How to you feel gender relations have evolved since those days?

MOSS: I think that men have learned a lot since then. I think women always knew what the right thing was, but I think it’s a question we’re asked a lot, the difference between then and now. I think there are big differences, definitely, in what is accepted and the laws, but there are things that are even worse than they were [in the Sixties] as far as the way women are treated, with Internet and the whole porn industry and GIRLS GONE WILD – it’s not very respectful, so I don’t know which is worse – being come on to in the office, which is not good, or having that sort of a thing [readily available pornography]. I think it’s just different. 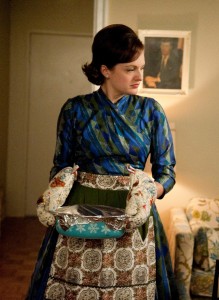 MOSS: You get these lines and these scenes. It makes your job so much easier and so much more enjoyable. You don’t have to make something sound good – you know it already does sound great. So I think that’s the Number One thing and that’s what I feel personally about Peggy – I feel like she’s become a really funny person, I think she’s developed a really good sense of humor about life, and that’s been really fun lately to play.

MOSS: My favorite part of the show is the people that I work with, the cast, the crew, the writers. They’re incredible people. I know it’s such a cliché, but we are kind of a family and we came from nothing to this really big deal, on a network that had not had a hit episodic show as successful a show as MAD MEN, although now they’re one of the top networks on television. We’re a period show, only thirteen episodes [per season], and we had a lot that could be going against us, but the show is just too good to be ignored, and I think the audience really recognized that. I don’t know how much you can prepare for or expect something would happen with the show. We wanted it to do well, we wanted people to watch it, we wanted it to be good, but I don’t think any of us were sitting around going, “Oh, yes, we’re going to win the Golden Globe for our first season.” It was shocking for us, but also it’s really validating. We think the show is really good, too. We work really hard to make it that way. Every single episode, nobody rests on their laurels at all. [The awards and recognition] are really cool – it’s a validation for all the hard work we’ve put in.

AX: Can you tell us anything at all about the end of Season Five?

MOSS: [laughs] I think that obviously, in super-annoying general terms – you’ve seen it over the past couple seasons. I think more and more, she’s becoming the person that she’s going to be in her life. She’s growing up and – you’ve seen it, so I’m not revealing anything – I’m really proud of the person she’s becoming. I don’t know if I expected that to happen, but I’ve had more fun, probably, playing her this season than any other season.