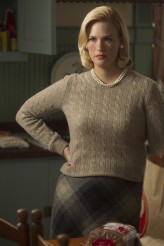 Even Weight Watchers can't help Betty get over Don Draper

“Dark Shadows” is an interesting episode of MAD MEN since, in a way, it revolves around Betty (January Jones). Betty has had a long journey from being the innocent wife that most of us felt sorry for in the first season of the series. Her character was perfectly justified in wanting a divorce from Don (John Hamm), and his philandering on the side only made her seem more the victim.

Then of course as seasons progressed you get to see the darker side of Betty. Honestly for me it starts with her involvement with Glen (Marten Holden Wiener). I still don’t understand what the hell happened there. Something to do with Betty giving him some of her hair…and let’s just call a spade a spade and say that Betty’s hair is probably like a gateway drug to a serial killer. Someday he’s going to be killing women and keeping locks of their hair as souvenirs.

Sorry got sidetracked there. Back to Betty. So then as time wears on Betty has her own sexual flings, entices Henry Francis (Christopher Stanley) into her life even though she is super pregnant at the time, and then goes full blown MOMMY DEAREST on her daughter Sally (Kiernan Shipka).

I knew in this episode right from the minute the scale was shown on the counter that Betty was in Weight Watchers. Those scales had been present in my house when I was a kid and my mom was trying the program (years ahead of what the calculator point counters that they have these days). This immediately meant that Betty is still in her padded suit. I kind of wonder if January Jones wanted more things to do with the character, or if the writers are punishing her for something. She does a good job as Betty grappling with her weight, and the scene of her inhaling part of a can of shipped cream only to spit it out was priceless.

Betty has clearly gone round the bend in terms of her state of mind. She wants her life with Don back, but would like to have it on the terms he has with Megan (Jessica Pare). Megan is free to pursue an acting career, they live in a nice luxury apartment in the city, and Don (so far) is remaining faithful to her. When Betty sees Megan changing there is a sort of creepy SINGLE WHITE FEMALE moment, where you half expect her to dive through the glass and kill Don’s new wife.

What’s Sally learning from everything? She’s a major part of Betty’s attack on Megan in this episode, once again dragging the specter of Don’s former “wife” Anna (Melinda Page Hamilton) into the room.   Sally is picking up the masterful art of manipulation on both sides of the coin. She’s figuring out how to hurt people through her words or actions, and she is getting damn clever and sassy. Once she turns into a full-blown teenager Don is going to have his hands full just trying to keep her in some kind of line.

There are lots of other things that happen in this episode of MAD MEN including Don sabotaging Ginsberg’s (Mark Feldman) chances of making a bit of name for himself on an account. There’s a bit with Roger (John Slattery) using his soon to be ex-wife Jane (Peyton List) to get in good with a client and then screwing up her chance at starting over, which I think he did intentionally. Roger is so passive aggressive about most of the conflicts in his life that I can’t help but think he is aware of pretty much everything he does. But…I still love the character.