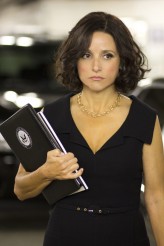 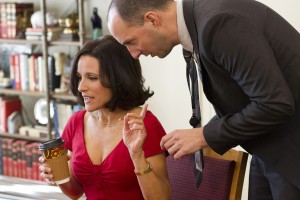 Writer/director/producer Armando Iannucci loves political comedy. The Glasgow-born hyphenate is also known for non-political comedy, including several series of ALAN PARTRIDGE shows starring Steve Coogan as an inept talk show host. However, a lot of viewers know Iannucci’s work from THE THICK OF IT, his satire of the British corridors of power, currently airing on BBC America. IN THE LOOP, the film based on THE THICK OF IT that Iannucci directed and co-wrote, was nominated for an adapted screenplay Oscar.

Now Iannucci has come to HBO with the half-hour comedy VEEP, which airs Sunday nights on the premium cable network. The series, in its first season and already renewed for a second, stars Julia Louis-Dreyfus as Selina Meyer, a former senator who is now vice-president of the United States. At least in VEEP, being a heartbeat away from the presidency doesn’t carry the power the job description would suggest.

ASSIGNMENT X: Had you been looking to do a series set in America, or did HBO come to you?

ARMANDO IANNUCCI: It’s a combination of things. I had an experience of American television trying to get an American version of THE THICK OF IT on air, which didn’t work, but which did mean that I had conversations with HBO. I’ve always been a fan of things like THE LARRY SANDERS SHOW – it’s a great comedy, I felt – and so when they said to me, “Look, on the back of IN THE LOOP, do you want to write something for us? We’ve got a political idea.” I thought about it for a little while, then the notion of a vice-president popped into my head. I thought, well, that could be funny.

AX: Is Selina Meyer meant to remind us of any real-life person or persons?

IANNUCCI: No. I made [the character] a woman because I didn’t want people to think, “Oh, it’s Joe Biden, it’s Dick Cheney.” And then of course you make it a woman and then people say, “Oh, she’s Sarah Palin or she’s Hillary Clinton,” and she’s not. She’s Selina Meyer. We don’t say which party she’s in, we don’t hear the name of the president, we never see the president. Because I wanted to feel about her [that] she’s a flesh-and-bones politician, she’s a mother, she’s divorced, she has ambitions. And it’s just about her. It’s not a take on anyone in particular. It’s more a look through her eyes at howWashington operates. And what the job does to you if everywhere you go, you have to go in a motorcade and have Secret Service and every room you walk into has five hundred people all clapping at you.

AX: Is VEEP in the same universe as IN THE LOOP?

IANNUCCI: Oh, I don’t know. I wanted to make it very different from IN THE LOOP.

AX: How are American politics different from British politics in the dramatization, or comedization, of them?

IANNUCCI: [laughs] In the U.K., our natural instinct is to do it as a comedy. I was a big fan of THE WEST WING, but in THE WEST WING, everyone is great at their job and has the noblest of intentions. And if you did that in theU.K., people would laugh at you for the wrong reasons, because they just wouldn’t believe it. So I think that’s the difference. I don’t know why, because your American politics are so institutionalized as well, and you have the big corporates putting money behind it, you have the electoral cycle, which seems relentless. I think there’s a tremendous amount of frustration inAmerica at the moment about how politics isn’t working. So maybe this is the time for a comedy.

AX: THE THICK OF IT is British and IN THE LOOP sort of marries British and American politics, so how much new research did you have to do for VEEP, how much research went into IN THE LOOP, and did you use the latter in the former?

IANNUCCI: The research for IN THE LOOP was very specific, because it was all about war, so I was speaking to people from the Pentagon and the State Department. This [VEEP] is about all of politics, so I actually expanded my research. I went to the Congress, I went to the Senate. I went to the vice-president’s office. And they were all very helpful. I basically got a sense of the sort of people that were in that office, the characters to write.

IANNUCCI: Well, I want to be as accurate as possible. But it is a comedy and therefore it has a funny storyline. But within that, I want the performances and the writing and the look of it to be as accurate as possible. We have done an exact reproduction of the vice-president’s office and the staff offices, right down to the fact that there’s a lot of clutter on the floor and there are pictures down on the floor that haven’t been hung up yet, because nobody’s had time. I wanted that and the performances to feel very naturalistic.

AX: How did you arrive at your casting for VEEP?

IANNUCCI: Oh, a long process, really. You write the characters first, in terms of taking away from my various trips toWashington what sort of ensemble of characters we should have, and then just a long process with the casting. When I’m doing casting, I get the people to not just do the script, but to be in character and I just ask questions of them in character, to see how comfortable they are inhabiting the skin of this character.

AX: Do you have a writing staff?

IANNUCCI: There are I think seven other writers on it, so we have got a writing team.

AX: So everybody on staff gets an episode to write?

IANNUCCI: And then we all pass them around and we all work on each other’s scripts. My way of working is – hasn’t changed. I mean, that’s how I worked in theU.K.

AX: So you had writers’ rooms on the U.K. shows as well?

IANNUCCI: Well, thankfully, I’ve had resources to play with. The thing is, in theU.K., it’s very much three or four people in an office, and that was it [laughs], which isn’t very expensive to shoot. Here, [the main character is] inWashington, she’s the vice-president. So when she does go from A to B, it’s in a motorcade, so you need to show a little bit. When she does go into a room, there are five hundred people there, standing and cheering, so you do have to show that. Now the trick, the challenge, was to try and show the scale of the world in which she works, while at the same time keeping the intimacy, the believability, the realism of her private self and her work self.

AX: Who are the characters surrounding Selina? What are their plot functions?

IANNUCCI: We have Gary [Tony Hale], who’s her body man, which sounds impressive, but basically, he carries her bag. But he will have everything she needs. He is always by her side, so this bag will contain her speeches, medications, her throat lozenges, her embarrassing ointments – everything. There’s a diary secretary, who sits at the door and just refuses entry to everyone else, there’s Mike [Matt Walsh], the head of Communications, who has to deal with all the press, the chief of staff Amy [Anna Chlumsky], who runs the office. There’s Jonah [Timothy Simons], who’s the guy from the White House, from the president’s office – basically, he’s a messenger. And he carries a powerful message, because he basically comes in to tell the vice-president what to do. And finally, there’s Dan [Reid Scott], who is the ambitious young Washingtonian, who’s clearly in twenty years’ time going to be someone quite big. There’s a journalist called the Beltway Butcher, Leon West, who we see in the second episode. There’s a rival politician, Governor Danny Chung, who people are talking of as a potential [White House candidate], who’s a bit of a rival to Selina. And towards the end of the season, we see somebody who could be her nemesis, a very ambitious congressman who could try and bring her down.

AX: Would you say political comedy is primarily what you do?

IANNUCCI: I do that, but I do [other] stuff as well. I’ve written a slapstick movie, it’s my second movie.

AX: What is the draw of politics for you in terms of subject matter? Is that just the funniest thing you can think of?