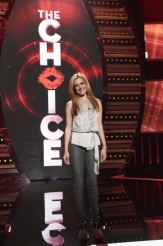 It’s THE VOICE, but without any talent or any substance and if it were a dating show featuring dudes who are better off not dating at all 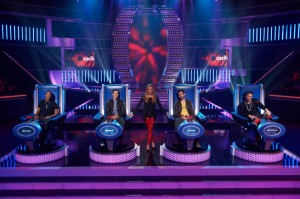 First THE VOICE introduced the concept of spinning chairs into a musical competition format. Now THE CHOICE does the same thing – but for the dating world.

The end result – an annoying series about talentless hotties who vie for the opportunity to go on a date with guys, who probably are better off not dating non-celebrities.

The first group of guys include Romeo, Jeremy Bloom, DJ Pauly D and Jason Cook and the concept is simple — with their backs turned in their slightly less state-of-the-art chairs, a girl comes out on stage and pleads with them to turn around. Maybe it’s her voice, maybe it’s because she says she’s easy, maybe it’s because she says she’s smart, but once they turn around (and if there are multiple chairs turned), she gets to pick who she wants to go on a date with.

Once each guy has three girls, there are two other rounds. Round 2 includes speed dating where they get 30 seconds to ask questions of their conquests, er contestants, before kicking one off. And finally, the last round has each remaining contestant asked a question by their suitors.

It’s all rather light and frothy, with Cat Deeley handling the hosting duties. She’s annoying, but not nearly as much as the bachelors or the girls who parade on stage looking quite silly (and desperate for celebrity love).

The positive thing is the show is only an hour and it moves fast. It crams a lot in (something most shows like this should learn from), but it can do that too since there is no substance. 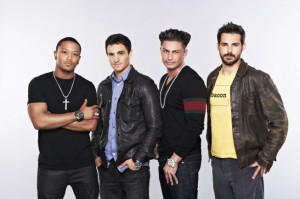 In fact, the most hilarious aspect of the show is when one of the guys tells a girl he’s rejected something along the lines of “you’re going to do great things.” As if looking hot was a talent. She didn’t sing. She didn’t dance. She just pleaded to go out with them. How is that a talent? And how can you tell they’ll go far?

THE CHOICE is bottom of the barrel entertainment. It’s so crappy, it’s entertaining in a bad sort of way. It also so shamelessly cribs from THE VOICE, I’m shocked NBC isn’t suing.

That said, THE CHOICE also fuels the conversation that sleazy guys like easy girls which is what THE CHOICE is promoting. I can’t wait to see when female celebrities pick normal guys.  It also is saying that you don’t need talent anymore – you just need to look good to make an impression which is terrible.

THE CHOICE is a novelty show that will probably have a few solid weeks in the ratings before the shtick gets old and some other network comes up with another rip-off show to further ruin our brain cells. The sad reality is, the way things are heading, the kill or be killed concept of THE HUNGER GAMES is sadly only a few seasons away.

The only choice with THE CHOICE is you can choose to not tune in.