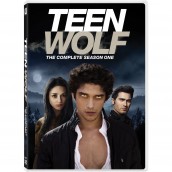 Like BUFFY THE VAMPIRE SLAYER when it first started airing as a TV series, TEEN WOLF is a title that inherently invites giggles whenever you mention to someone they should check it out.

Yet, BUFFY overcame its title and TEEN WOLF will now that it’s hit DVD for its first season.

The series made its debut on MTV last summer and proved to be one of the smartest, well-made genre series to hit TV in some time. The second season just began last week.

The series is funny, scary and feels like a mini-movie each week. Plus, it takes its premise seriously unlike the 1986 feature film starring Michael J. Fox where the source material originally came from.

The series follows a similar path as Scott McCall (Tyler Posey) gets bitten by a werewolf and needs to keep it hidden from his family and his girlfriend Allison Argent (Crystal Reed) whose family happens to be werewolf hunters.

The only person who knows his secret is his best friend Stiles (Dylan O’Brien) who thinks it’s kind of cool, but also knows he needs to protect him as well.

Supporting players include fellow wolf Derek Hale (Tyler Hoechlin) who tries to teach him the ways of the moon and jerk jock Jackson (Colton Haynes) who eventually uncovers Scott’s secret and wants in on it.

Developed for television by Jeff Davis and directed with feature film flair by Russell Mulcahy, Toby Wilkins and Tim Andrew, the twelve episode on this DVD set feels like a 12-hour movie. It’s intense, intriguing, filled with plot turns and irresistible. It’s the way most genre series should be, but strangely, somehow fail after the pilot stage.

Much of that credit goes to Davis for having a singular vision of how to pull it off and surrounding the series with smart, capable and visionary directors to match his ambitions.

The cast is also tight and strong. They may be the regular archetypes we see in so many teen angsty films, but they’re infused with strong identities, great dialogue and the ability to crack the occasional dead-pan joke or two.

The special features include the extended season finale, deleted, alternate and extended scenes (nothing new or revelatory here), featurettes on the cast and “working the red carpet”, audio commentary and a somewhat amusing gag reel. One of the funniest featurettes is a segment that collects all the scenes where the characters go “shirtless” – something fans of the series will appreciate since it appeared all too often that TEEN WOLF went a little overkill on its shirtless leads.

For those who watched the series on MTV, be warned that the series offers up the disclaimer “this series is musically edited” which means that some of the more mainstream songs have been replaced for music licensing issues.

While, I guess that’s fine, it would make sense to clear the music for both MTV and the DVD release, because very often the music gives an episode its character and flavor. What would the CHUCK season finale be without the song “Rivers and Roads” by the Heart and the Head playing at the end of it?

Oh well, you can’t win them all, but at least Season 2 of TEEN WOLF begins in a couple of weeks on MTV. Now’s the time to catch up, because I guarantee you, this series is the real deal.