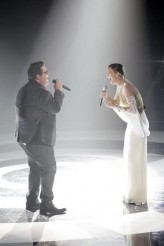 A formula that still doesn't work and hasn't anyone learned anything about song selections from other shows like this? 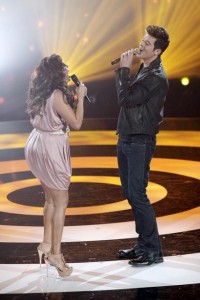 DUETS continues its downward spiral with another week of frustrating song choices. Song choice is still a big issue with these shows and many contestants suffered this week because of this.

The theme this week is “Songs That Inspire.” Did I see this theme eight times last season on AMERICAN IDOL? Can’t anyone come up with anything new? How about “Elvis Costello Week” or something more challenging? Ugh.

Still no public voting unfortunately – so the show proves to be a popularity contest among the judges again as they pick apart the singers with potential and vote some others higher than they actually deserve.

Here’s the rundown for Week 3.

Alexis Foster with Robin Thicke – “Killing Me Softly”
Otherwise known as the moment in the show where everyone’s ears start to bleed. A horrible arrangement of “Killing Me Softley.” Foster can sing, but Robin didn’t do her any favors here. Their vocals didn’t mesh, it was too slow and it didn’t showcase her. Ugh. Sorry you got picked by Thicke, Foster. There’s a reason why pop radio doesn’t play him in rotation and this song was proof.
Final Placement: 8

John Glosson with Jennifer Nettles – “How Great Thou Art”
Clearly one of the best singers of the competition. He has a pure, honest and emotional voice and does a great job on this spiritual hymn. And their duets together are always very strong. He is the most unconventional singer of the competition, but he deserves to go far. And damn, Nettles proves each week what an incredible singer she is. She may be known for country, but she really is showing how versatile and what a powerhouse she is.
Final Placement: 2

Jordan Meredith with Kelly Clarkson – “Mama’s Broken Heart”
Another solid singer that’s been beaten up during the competition. She’s got pipes and is a good match for Clarkson. The problem stems from their voices being so similar, so when they duet, it’s not dynamic enough. The good part, this song showcased individual moments for Meredith that really let her shine. She’s still a bit stiff in the performance area, but singing, she has the potential to be a star and with a little more confidence she could go far.
Final Placement: 3

Meleana Brown with John Legend – “If I Ain’t Got You”
Last week Meleana came in to replace another singer that was let go. And she has big pipes and wowed last week. She sings the hell out of this song. No complaints here. She’s probably too good to be on this show. For a latecomer, she’s the whole package.
Final Placement: 5

Olivia Chisholm with Robin Thicke – “Crazy in Love”
Last week’s bottom performer takes on Beyonce. Here we go again with artists like Beyonce and Alicia Keys. Yikes – hearing Thicke try to rap and be ghetto was embarrassment. Did he really have to do that? He overtook Chisholm. She’s a good singer, but this song didn’t do her any favors and it was too goofy opposite Thicke. What is he doing with his singers? Stop the madness now!
Final Placement: 6

J Rome with Jennifer Nettles – “How Am I Supposed To Live Without You”
Wow, Nettles gets the emotional performers, but that’s what makes them so good. This song was dedicated to J Rome’s grandfather. Once again J Rome really shines. He is such a charismatic performer and his voice complements Nettles so well. He will continue to go far in the competition as well. He’s at the top and deservedly so.
Final Placement: 1

Jason Farol with Kelly Clarkson – “Hallelujah”
My displeasure with this song being over-used on AMERICAN IDOL and THE VOICE is not because it’s a bad song – it’s brilliant. It’s just that it’s hard to really do anything new with it. That said, what I haven’t heard on a musical competition show is it sung as a duet. And, yes, once again, Farol delivers the goods (even though he gets  criticism from the judges which lands him once again in the bottom again). He sounds great with Clarkson too.
Final Placement: 7

Bridget Carrington with John Legend – “I Heard It Through The Grapevine”
What the hell? John Legend comes out first and nails it, with a perfect arrangement and then Carrington comes out and the arrangement suddenly changes tempo and makes her sound INFERIOR to Legend. This is supposed to showcase the amateur. Yes, she got some vocal pyrotechnics, but the arrangement and tempo was all wrong for her. She’s got a good voice too and at least this song isn’t overused.
Final Placement: 4

A solo showdown a cappella, no band, no back-up between Jason Farol and Alexis Foster wraps things up – since they’re in the bottom two. Farol takes on “Me and Mrs. Jones” while Foster does “(You Make Me Feel Like) A Natural Woman”

Farol keeps it simple, while Foster went over-the-top and it sounded a little too shaky. Honestly, Farol at least mixes things up, Foster is too similar to other contestants on the show which is why, she was sent home.

DUETS continues its quick slide into insignificance. Will little reason for audiences to connect (because they can’t vote, yet), it’s becoming hard to watch perfectly decent performers like Farol get destroyed by a rigged voting process.

Will it get better? Maybe, but it’s doubtful the ratings will heat up if, and when, that happens.