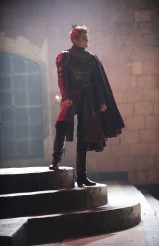 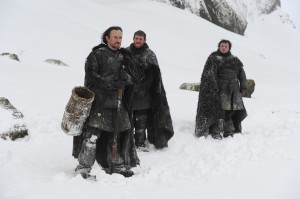 Here? They’re leaving us here? This may be a lot of people’s primary reaction to the conclusion of “Valor Morghulis,” the conclusion of Season 2 of GAME OF THRONES. We get some resolution, or at least reasonable points to pause the story, in a few plot threads, but many more leave add rather than subtract questions, leaving us to wonder what’s coming next.

First off, we find that Tyrion Lannister (Peter Dinklage) is not dead, but merely bears a nasty gash across his face. Lord Varys (Conleth Hill) tells Tyrion that it wasn’t an enemy soldier who struck the blow, but rather an assassin sent by Tyrion’s sister Cersei (Lena Headey). Tyrion has been replaced as Hand of the King by his father Tywin (Charles Dance) and most of his friends have been sent away. Despite the danger, when Tyrion’s lover Shae (Sibel Kekilli) suggests that he run away with her, Tyrion confesses that he loves outwitting his awful family and Shae reaffirms her devotion to him.

Now that the Tyrells have helped the Lannisters defend King’s Landing, King Joffrey (Jack Gleeson) offers Loras Tyrell (Finn Jones) whatever he wants. Loras asks Joffrey to marry his sister Margaery (Natalie Dormer). Joffrey protests that he’s engaged to Sansa (Sophie Turner), but Cersei, the council and the mystics all weigh in that Joffrey should marry Margaery. Joffrey renounces Sansa, who is secretly delighted, but Baelish (Aiden Gillen) privately warns Sansa that Joffrey may still beat and rape her. Baelish offers to help Sansa get home to the North, but Sansa insists that King’s Landing is her home.

Lord Varys visits one of Baelish’s employees, the prostitute Ros (Esme Bianco) and offers her a partnership – we don’t hear the details.

Now that Arya Stark (Maisie Williams) and her friends have successfully fled Harrenhal with the help of Jaqen H’ghar (Tom Wlaschiha), Jaqen offers to take Arya with him to Bravos, where she can learn to be a killer. Arya wants to go, but feels she must stay for the sake of her family. Jaqen gives her a stone and tells her that if she wants him, she should give the stone to a man from Bravos and say the words “Valor Morghulis.” Jaqen then tells Arya that Jaqen H’ghar is dead – when Arya looks at him again, he is literally a different man.

At Winterfell, Stark soldiers have surrounded the keep. Luwin (Donald Sumpter) advises Theon Greyjoy (Alfie Allen), who has captured the place but clearly can’t hold it, to sneak out and join the Night’s Watch. However, Theon instead gives a passionate speech to his men – and is promptly knocked unconscious and tied up by them. One of Theon’s men stabs Luwin.

Outside the walls, Bran (Isaac Hempstead-Wright), with his younger brother Rickon (Art Parkinson), Wildling servant/protector Osha (Natalia Tena) and loyal Hodor (Kristian Naim) finds the dying Luwin. Luwin counsels them to go north toward the wall. When Bran is out of earshot, Luwin asks Osha to finish him.

Brienne (Gwendoline Christie) winds up having to kill three Stark soldiers to protect her prisoner, Jaime Lannister (Nikolaj Coster-Waldau) – and to avenge the young women the men raped and murdered. Jaime is impressed with Brienne’s fighting prowess.

Despite his mother Catelyn’s (Michelle Fairley) concerns about what this will mean in terms of negating a marriage agreement between her eldest son and Walder Frey’s daughter, Robb Stark (Richard Madden) weds his beloved Talisa (Oona Chaplin).

Stannis Baratheon (Stephen Dillane) is so angry at losing the battle that he almost strangles his priestess Melisandre (Carice Van Houten). Melisandre tells Stannis her Fire God is within him and advises Stannis to look into the flames. He seems to see something there.

In Qarth, Daenerys (Emilia Clarke) goes to the warlocks’ House of the Undying. She has a vision of her late husband Drogo (Jason Momoa) and their child, but forsakes the warmth of this to find her dragons. The baby dragons are in chains, and when Daenerys finds them, one of the warlocks chains her with magic. Daenerys is told that the warlocks gain power from proximity to the dragons and the dragons gain power from proximity to Daenerys, so she must remain here forever. However, the dragons also obey Daenerys, who directs them to incinerate the warlock with their flames. With the warlock dead, the chains vanish. Daenerys revenges herself on the treacherous Xaro (Nonso Alonzie) and her duplicitous servant by locking them both in Xaro’s vault. Daenerys and Jorah (Iain Glen) and Daenerys’ Dothraki followers then raid Xaro’s palace, obtaining enough wealth to buy a boat to bring them back to Westeros.

Beyond the Wall, Qhorin (Simon Armstrong) induces Jon Snow (Kit Harington) to kill him in a fight so that the Wildlings will trust Jon. At the fight’s end, Jon is stunned and guilty, but his Wildling captors take him to see their king Mance Rayder.

Samwell (Richard Bradley) gets separated from his comrades and his horrified to see an army of White Walkers – some on undead horses – heading south toward the Wall.

“Valor Morghulis” is a major juggling act. Ending with the White Walkers creates symmetry with the opening episode of the series, “Winter is Coming,” which began with a frightening encounter between men of the Night’s Watch and Walkers. How this will affect the War for the Iron Throne promises to be intriguing – will any of these sworn enemies be able to join together to deter this supernatural threat, or will they be too busy fighting each other? Or will everybody be occupied with battling dragons? As we like Samwell a good deal, the sequence also has suspense.

There are many other interesting set-up sequences throughout. However, some stand out strongly in their own right beyond simply what they portend for the future. Daenerys’ adventures in the vision-producing castle have an eerie, fantastic quality, seeing Momoa as Drogo again is a welcome surprise and it’s an utter delight to see Daenerys come into her own when reunited with her scaly adopted offspring.

The scene in the throne room, with all of the characters lying their hearts out and Baelish not recognizing Sansa as a genius deceiver, is wondrous in other ways. It’s unclear yet exactly how bad we should feel for Margaery, as she can’t possibly know what she’s in for marrying Joffrey. We do wonder why Sansa is so intent on staying in King’s Landing. Vengeance seems likely.

Then of course there’s Dinklage’s Tyrion. He and Kikelli’s Shae are utterly romantic together, the more so because of her no-nonsense manner. Let’s hope the announced separation between Tyrion and Varys is not long – Dinklage and Hill are a continual joy to watch together.

The scenes with Theon feel ever so slightly miscalculated. Allen does a terrific job in making Theon real. However, Theon has been so thoroughly slimy that even giving him a sense of self-awareness, a speech that Henry V might envy and the forgiveness of Luwin isn’t enough so far (at least for this viewer) to make him a sympathetic villain, a la Jaime, which seems to be the intention. We believe Theon as a character, we just aren’t really pulling for his redemption.

Overall, “Valor Morghulis” leaves us panting to know what will happen next, on scales large, small and of course scales covering dragons. Of all the tragic moments in GAME OF THRONES, the one when we know we’ve got to wait almost ten months to see more is the most wrenching.