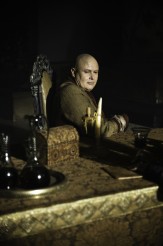 Thrilling - this is how you do battle scenes

GAME OF THRONES has threatened “war is coming” from the beginning of the season, and we’ve seen clashes, but “Blackwater” is breathtaking. Major feature films would be hard-pressed to create medieval battle scenes this gripping, brutal and wide-ranging, not to mention expertly paced. Although the main impression of the episode is that we’re right in the middle of the siege of King’s Landing – and to be fair, we often are – there are plenty of side trips as we see the strategy on both sides, and the furious frustration of Queen Cersei (Lena Headey) at being unable to join the battle.

Before Stannis Baratheon’s (Stephen Dillane) ships reach King’s Landing, Lord Varys (Conleth Hill) warns Tyrion (Peter Dinklage) that Stannis has allied himself with “dark arts” (which we’ve seen earlier at work when Renly Baratheon was killed). For Stannis to take the throne, in Varys’ opinion, would be the worst possible outcome.

On the battlements, Tyrion maps out a strategy to defend King’s Landing, even daring to insult his nephew King Joffrey (Jack Gleeson). Joffrey is aware that he can’t both punish Tyrion and hope to win the day.

Cersei is in her chambers with all the other royal ladies, including Sansa (Sophie Turner), whom Cersei alternately mocks and advises. Sansa’s maid Shae (Sibel Kekilli), who is secretly Tyrion’s lover, piques Cersei’s curiosity, but the night is too eventful for Cersei to question Shae extensively.

Rather than send out the royal navy and be outnumbered by Stannis’ ships, Tyrion uses “wildfire,” setting ablaze one unmanned boat when it is near enough to the invading fleet. A lot of ships are lost, including the one captained by Stannis’ favored captain Davos (Liam Cunningham).

However, Stannis and his army make it to shore and attack the gate with a battering ram. When Cersei tells her kinsman to bring Joffrey back inside, Joffrey actually goes, leaving Tyrion to rally the troops. Tyrion gives a speech, some of it unprintable here, that actually inspires the soldiers to fight – not for the king, but for themselves and their homes.

A huge mass of men charges to the gates. Tyrion is struck on the battlefield, though his attacker is killed by Tyrion’s squire Podrick (Daniel Portman). We’re not sure if Tyrion is alive or dead.

Sandor Clegane (Rory McCann) loves killing but hates fire. He leaves the battlefield, fed up, and offers to take Sansa back north to Winterfell. We do not know if she accepts.

Cersei is on the point of giving poison to her younger son Tommen (Callum Wharry) when the throne room doors are thrown open – by Cersei’s triumphant father Tywin Lannister (Charles Dance), whose army has saved the day.

Written by George R.R. Martin – the author of the A SONG OF ICE AND FIRE novels on which the series is based – and directed by Neil (THE DESCENT) Marshall,  “Blackwater” epitomizes GAME OF THRONES’ extraordinary marriage of the intimate and the epic. We are drawn into the combat scenes not because of their brilliant staging – although they really are wonderfully done – but because we care about so many of the people caught up in the fighting. We fear for both sides – until the sympathetic Davos dies. Then, while we pity Stannis’ poor burning followers, we realize that everybody we care about is in the city. Joffrey remains a supremely rotten individual, with Gleeson giving a splendid performance, but we care about Sansa, Shae, Varys, Tyrion’s protector and friend Bronn (Jerome Flynn) and many others – to say nothing of Tyrion himself. (If Tyrion is dead, I fear furious hordes charging over the Internet, leaving scorched virtual earth in their wake.) We are amazed by tactics and fearful of each clash. The word “thrilling” is often overused, but it applies here.

Dinklage gives Tyrion’s call to battle the kind of honesty, clarity and humanity that will be the envy of most actors doing the St. Crispin’s Day speech from HENRY V. Turner gets some lovely moments when Sansa finds an unexpected sense of leadership within herself, as she comforts and unites the frightened women in Cersei’s chamber after the queen leaves, and Dillane has a grim nobility as Stannis that makes us believe him as a leader who has no doubt about his right to rule.

Speaking of ruling, it’s hard to imagine how GAME OF THRONES could be much better. This is magnificent television.