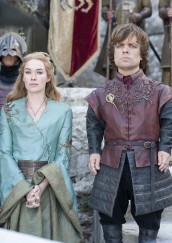 TV Review: GAME OF THRONES – Season 2 – “A Man Without Honor”

An episode with multiple moments of shock and awe, in terms of both physical spectacle and emotion

GAME OF THRONES is an overall amazing series, but even it (so far) has boasted few episodes like “A Man Without Honor,” which continually knocks the wind out of us, amazed by what’s happened and fearful of what may be coming next – and simply bowled over by scenes of feeling that are all the more powerful for their unexpected nature.

At Harrenhal, Lord Tywin (Charles Dance) is still trying to figure out Arya (Maisie Williams), especially when it turns out she, claiming to be a stonemason’s daughter, knows more about the history of the Targaryens and their dragons than he does. Arya is very enthusiastic about the Targaryen warrior women. Tywin talks about how the Targaryen dragons destroyed Harrenhal Castle, designed to withstand any number of ground attacks, with fire from above.

At King’s Landing, Sansa Stark (Sophie Turner) tries to hide evidence that she’s begun menstruation, because this means she’s of childbearing age and will have to marry King Joffrey. However, Queen Regent Cersei (Lena Headey) is told and does her genuine best to give Sansa counsel, namely that a mother can only afford to love her children. Tyrion (Peter Dinklage) later visits Cersei, worried about the impending attack on the city by Stannis Baratheon. Joffrey still isn’t acting like a king. Cersei finally slowly acknowledges that her twin Jaime (Nicolaj Coster-Waldau), rather than her late husband King Robert, is the father of her children, and she fears that Joffrey’s violent nature is her punishment; after all, the Targaryens married brother to sister and half of that family was insane. Tyrion comforts his sister, saying that her two other children are actually good people.

Jon Snow (Kit Harington) continues to trek through the frozen wastes with his prisoner, the Wildling Ygritte (Rose Leslie), who teases him about his sexual response to her, then escapes and turns the tables on Jon, who finds himself surrounded by Ygritte’s tribe.

In Qarth, Ser Jorah (Iain Glen) tells the angry and stricken Daenerys (Emilia Clarke) that he will do whatever she wants. What Daenerys wants is to find out who has her dragons and then to get them back. When a meeting of the Thirteen Rulers of Qarth is convened, Daenerys is invited. Pyat Pree (Ian Hanmore) says that the dragons are at the House of the Undying and he wishes for Daenerys to join her children there – forever. Pyat and Xaro Xhoan Daxos (Nonso Anozie) stage a bloody coup on the rest of the Thirteen – Jorah helps Daenerys escape in the chaos.

Jaime, a prisoner in the Stark encampment headed by Catelyn Stark (Michelle Fairley) while Robb (Richard Madden) is temporarily away, gets some company when Alton Lannister (Karl Davies) is locked in the pen with him.Altonhero-worships Jaime, having squired for him. Jaime shares his own squiring stories with Alton– and then murders his young kinsman, effectively summoning a guard, who Jaime strangles. Jaime’s escape is shortlived, and he’s angered so many Starks by killing the guard that it seems he’s going to be lynched. When Catelyn comes to see Jaime, he acknowledges his lifelong affair with his sister and taunts Catelyn with the late Ned Stark’s infidelity (the proof is the bastard son, Jon Snow, that Ned brought home). Catelyn asks her knight Brienne (Gwendoline Christie) for the use of her sword.

Most of the scenes in “A Man Without Honor” – the title quotes Catelyn’s assessment of Jaime, but it certainly refers to Theon as well – leave us gaping. The scene between Jaime and Alton is so charming and full of gentle affinity that when Jaime tells Altonhe couldn’t escape until now, our reaction is sincere regret. We like Alton, but more, we don’t want Jaime to be the treacherous self-preservationist we know he is. Even after that, when he’s trying to goad Catelyn into killing him before he’s ripped apart by the mob, we’re amazed when Catelyn actually takes up a sword. The scene between the two of them, with Jaime taunting and Catelyn with a barely restrained fury of hellish proportions, is dramatically riveting, and Coster-Waldau and Fairley are both extraordinary.

The mental and emotional chess game between Tywin and Arya is subtler and less brutal – for now – but it is similarly gripping. Williams shows us Arya trying to remember this shrewd man is her mortal enemy and Dance makes the wealthy lord endlessly shrewd yet human.

The scenes in Qarth zip by. Daenerys is being somewhat bratty, but the slaughter in the Council is so wholly unexpected that we’re breathless. It’s a little unclear as to whether Xaro prevailed according to his plan or was betrayed by the warlocks, but presumably this will be clarified in future episodes. Since the dragons are likely to stay in the story and they need Daenerys to survive, we can surmise that a reunion will occur, but the suspense surrounding it ratchets up considerably.

As for Winterfell, actor Allen and the writers are turning Theon into a villain of virtually Shakespearean dimensions, a man who lets not only bitterness and ambition but futile desire for parental approval get the better of his humanity. We desperately want Theon to get a severe kicking, but we can’t help pitying him as well.

The scene between Tyrion and Cersei lacks the corpses and action of the other major plot threads. Still, the moment in which Tyrion instinctively almost embraces his sister, then falls back as they both realize this is closer than either can comprehend, is as startling and moving as any other high point in the entire series.

This leaves Jon and Ygritte. Yes, we know it’s a major storyline, and Leslie is likable as the spunky Wildling, but there’s something a bit slow and sloggy in these scenes, and it’s not just due to the difficulties of trekking through deep snow. Jon really is acting like a dope here, and while Harington gives us the character’s embarrassment and irritation, there’s no spark suggesting that there’s real desire underneath. In an episode that otherwise crackles like fire, the combative courtship here feels repetitive.

In all other respects, “A Man Without Honor” is an episode with greatness.