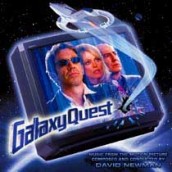 If there was ever a geek desert island movie, and score, then it would be 1999’s GALAXY QUEST. Beyond its brilliant high-concept of throwing Classic Trek’s “ has-been actors into a real outer space adventure, what made the movie work was just how much love it really had for Kirk and company- a determination to make the premise anything but a shabbily extended SATURDAY NIGHT LIVE skit. For with just a few less degrees of satire, one could actually, almost buy these actors being on a spiffed-up Enterprise bridge, fighting Gorn to David Newman’s trumpeting theme for a cult TV show that never was- its “fake” fanfare equally endearing to QUEST fans as Alexander Courage’s real deal is to Trekkies. Now Newman’s previously, promo-only s QUEST gets launched as a limited edition from La La Land records, proving resoundingly just how many meta-levels his music works on.

Like this big-budget production that really did its homework on how to amplify the original show’s sometimes cheesy charm, Newman’s GALAXY plays like a checklist of the great CT scores by the likes of Sol Kaplan, Gerald Fried and Fred Steiner (not to mention the movie scores by Jerry Goldsmith and James Horner). There’s the proud military percussion, the noble strings of going boldly, spectral choruses, and drop-kick percussive action music- all given the symphonically grand, big screen life that makes QUEST‘s cast’s mouths drop when they step onto the Thermian version of the N.S.E.A. Protector. And having come up with a memorable theme that never becomes tiring, Newman is sure to have it every step of the way. But what also made him the perfect composer for GALAXY QUEST was a talent for antic comedies like THE FLINSTONES and THE NUTTY PROFESSOR. Indeed, few composers this side of Carl Stalling has written such dense, screwball “cartoon” music, Looney Tune antics that Newman crosses with the tongue-in-cheek derring-do he brought to his glorious comic book score for THE PHANTOM. The result is a soundtrack that’s simultaneously hilarious and truly thrilling, having at it with the musical conventions of STAR TREK while playing them straight. And it’s exactly this musical gravitas at a death of a kind Thermian, the humiliation of a cowardly captain, and the cast members’ final rise to true heroism that gives QUEST the stuff of real greatness- a la Elmer Bernstein’s work for the similarly themed THREE AMIGOS.

Once as requested an item as a videotape of the original Kirk-less pilot to “The Menagerie,” GALAXY QUEST‘s promo has now been given a bit more music in the bargain, with a truly retro Easter egg at the end of the album. Tim Greiving’s terrific liner notes feature a new interview with David Newman on the score that would likely earn him a place of honor at any STAR TREK convention, especially for musically taking their idols seriously in the name of satire.

Click on Link: To Purchase the GALAXY QUEST soundtrack