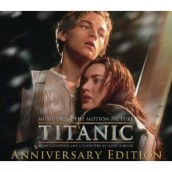 James Horner's scores goes on, along with the band this time

“My Heart Will Go On,” and on and on and on with the popularity of the most waterlogged movie to win Best Picture, especially for the concurrent 100th anniversary of the ship’s sinking and the 15th years since the movie’s release. So what better time to make hay of all things musically TITANIC than with multiple releases of its Oscar-winning score and song? While a four-disc soundtrack set offers copious source music and extra instrumentals, chances are TITANIC non-fanatics will be more than sated with this 2CD anniversary edition, which contains the lion’s share of Horner’s score, and, of course, Celine Dion. But it’s a new, shining musical star that really steals the refurbished boat here.

All Celine over-exposure aside through the years, there’s still no denying the epic, emotionally thematic power of TITANIC‘s song and score. Carried by what’s likely the cinema’s most romantically iconic melody next to “As Time Goes By,” Horner’s music captures a similar feeling for pure, ill-fated love, as caught amidst the grandeur, and self-sacrifice of one of history’s greatest tragedies. As a composer whose nautically influenced style could be heard all the way back to STAR TREK 2 and COCOON, Horner also brought a sense of seafaring adventure to TITANIC, while also ensuring James Cameron’s goal of making the music feel “timeless” by combining his strings with ethereal synths, as well as Uilleann pipes for the liner’s Irish port of origin. But all compass points will lead to the fateful iceberg, with Horner unleashing, terrifying, metal-rending percussion and orchestral thrills that could easily have played in Cameron’s ALIENS. Yet amidst the score’s desperation to abandon ship, it’s old-fashioned emotion that truly floods through every passage of the score, music that achieves a beautiful sense of transcendence from the tragic.

With so much conversation about the captain’s table, and even more commotion going about on deck, it’s little wonder that the source music performed onscreen by I Salonisti didn’t get the recognition it deserved. But now this chamber quintet for strings and piano gets a well-deserved, solo-disc spotlight on this set, their music proving as impressive as Horner’s in its own right. Accomplished composer John Altman (FUNNY BONES) commanded the group as TITANIC‘s historical music advisor, his knowledge of the popular tunes of the day making for a lilting, spot-on replication of the White Star Line’s shipboard band, whose on-demand playlist he whittled down from over 200 songs to about 25 for the picture. Their repertoire of waltzes and “pop” tunes is still eminently recognizable, from the “Blue Danube” to cartoon stalwarts like “Pop and Peasant,” as well as a top-ten number like “Alexander’s Ragtime Band.” But no melody is as moving as “Nearer My God to Thee,” their somber hymn building with emotion as the ship goes down. While most chamber music of this sort can become grating very quickly, I Salonisti’s soulful playing has the resonance of a full orchestra, not only transitioning between numbers with beautifully classical ease, but transporting the listener on board the Titanic itself to relax in the company of its house band. Not only does the music carry the sense of refined civilization, but it also helped provide a sense of order that likely resulted in saving a few more lives. Never has a conductor’s appreciation for his band been more moving.