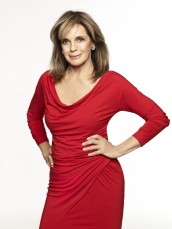 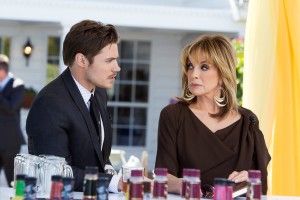 Sue Ellen Ewing is one of television’s great survivor characters. Let’s face it, to make it through eleven seasons of DALLAS, which ran on CBS from 1978 through 1991, plus two telefilms (1996’s DALLAS: J.R. RETURNS and 1998’s DALLAS: WAR OF THE EWINGS), to say nothing of marriage to Larry Hagman’s infamous J.R. Ewing, there’s nothing else she could be.

Linda Gray, the actress who so indelibly played Sue Ellen, now finds herself returning to the role yet again in TNT’s revival/continuation of DALLAS, which premieres tonight. In the new edition, developed by executive producers Cynthia Cidre and Michael Robin, Gray’s Sue Ellen, Hagman’s J.R. and Patrick Duffy’s Bobby carry on the Ewing tradition, which is to say they’re all still at each other’s throats in terms of business and family. Cast members new to the drama include Josh Henderson, Jesse Metcalfe, Jordana Brewster, Julie Gonzalo and DESPERATE HOUSEWIVES’ Brenda Strong.

Gray, a Los Angeles native, has worked continuously between DALLAS gigs, but she’s clearly delighted to be reunited professionally with her off-screen good friends Hagman and Duffy, as well as to be returning once more to her tart Texan icon. After a panel on DALLAS, she takes some time to talk at greater length about her work on the new show in this exclusive interview with ASSIGNMENT X.

ASSIGNMENT X: What were you doing between the end of old DALLAS and the beginning of new DALLAS?

LINDA GRAY: I’m not a giver-upper person. I always act. I’m always doing things. So I’ve never stopped. People say, “Oh, you weren’t on a series, or you didn’t do that,” but I’ve been doing theatre, et cetera. So you just continue. If you love something, you continue. When you become a certain age in Hollywood, they dispose of you. So that’s why it’s so interesting and a blessing to be working right now.

AX: When DALLAS came back, did you have any reservations, or did you just go, “Yay!”

GRAY: I went “Yay!” of course. I was talking earlier about actors getting a chance to play a character that you played thirty years ago, and continue that. I don’t know many actors who get that luxury. And for us [Gray, Hagman and Duffy], it was so exciting, because we love, love, love the show. We love each other. We’re very, very close friends and [the new DALLAS] was a lovely continuation of the momentum we had started years ago. The three of us feel very blessed, honestly, to be given the same roles, the same characters that we did for all those years.

AX: How did you first hear about the new DALLAS? Did the producers come to you, did one of the other actors say, “Hey, guess what’s going on?”

GRAY: We were all given the same call at the same time. Not on a conference call, but people forget, or maybe they’re not aware, that the three of us talk all the time. We all [said to each other], “Did you get that call?” “Yes, did you?” It’s beyond exciting. Now that we’re all over Twitter and Facebook and all this wonderful new stuff, [people] all over the world so excited, and even today, people stop and talk to me about all of us, about sitting with their grandmother or their boyfriend that’s now their husband or their wife, all these wonderful stories of these wonderful days that they spent with us all those years [ago]. That doesn’t happen very often.

AX: Did you have a good time making the original DALLAS?

GRAY: The original show should have been a sitcom, because I laughed every single day that we were on the original set, and nothing has changed. Nothing. I’m happy to be working with two of my dearest friends again.

AX: Back in the day, Sue Ellen was known for a few traits besides slapping her now-ex-husband J.R. She had an eye for the boys and she also drank a little bit, so are those characteristics still with her or has she gotten a little more pulled-together?

GRAY: It’s a whole other Sue Ellen. She doesn’t seem to be a homebody in my estimation. How can I say it? She’s much more her own person, she’s very much a Texan. That’s all I can tell you [laughs].

AX: Is Sue Ellen’s relationship with Bobby pretty much the same?

GRAY: Yes. Patrick and I had our first scene together in show seven. So Bobby’s busy and Sue Ellen’s busy. So they really haven’t had that much [together] yet.

AX: Do you have scenes with any of the newcomers?

GRAY: Oh, sure. Josh [Henderson] plays my son [John Ross Ewing], so we’re constantly having scenes together. I’m working with him more than most, with him and J.R. Sue Ellen’s not at Southfork any more, so she’s out on her own.

AX: Is Sue Ellen trying to groom John Ross’ character to be any one thing or the other?

GRAY: No, I’m just trying to be the best mother I can, so that’s what I do.

AX: Any other new projects we should know about?

GRAY: I have a film that we shot in Mexico City called HIDDEN MOON that comes out this year.

AX: Anything else that we should know about DALLAS at this point?

GRAY: We are filming there, in Dallas,Texas, and we’re happy to be there, and we all have condos all around Dallas. It’s great. I love it.