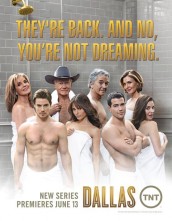 Growing up watching the original DALLAS series and just hearing the theme music play again for the newly rebooted DALLAS, I have to admit it put a smile on my face. Back in the ‘80s I anxiously waited ‘til Friday every week to get my Ewing family drama fix and the thunder of the theme song booming through my TV speakers only accelerated my excitement. It is a credit to the producers of the new DALLAS that I soon felt that feeling again after viewing the pre credit opening scenes. And then there is was…da dun da dun da dun dada dun dun da da da da da dun….ah, music to my ears.

It’s 2012 now and good son Bobby Ewing (Patrick Duffy) now lives at Southfork Ranch after the passing of his parents Elle and Jock. Bobby was left the Ranch while bad son J.R. Ewing (Larry Hagman as good as ever) was rightly omitted from any ownership of the land. In fact, when DALLAS opens this time around the aging J.R. is declared incompetent and is living at some kind of assisted care facility, due to an illness and clinical depression.  However, J.R. and Bobby aren’t the only ones fighting for land these days. DALLAS 2012 newcomers Joss Henderson as John Ross Ewing (the divorced J.R. and Sue Ellen Ewing’s son) and Jesse Metcalfe playing cousin Christopher (the also divorced Bobby and Pam Ewing’s son) have a contemptuous relationship of their own. It doesn’t help any that John Ross is now seeing Christopher’s ex–fiancee Elena (Jordana Brewster).

Christopher, seemingly having moved on, is set to marry his new fiancée Rebecca (Julia Gonzalo), which brings the family together temporarily, even a few surprising faces from the original series stop by. But what’s odd is there is no mention of Pam, Christopher’s mother. And she is no where to be seen. Nothing is ever made of the fact that her son is getting married and she’s not there. A bit, odd, and yet, hopefully it will be addressed in future episodes.

No need to be picky though, the drama, the entangled sex partners and the deep deceptions and heavy emotions plagued by the cast is abundant and plentiful on this newly configured DALLAS. Henderson is superb as J.R.‘s notorious son, not an easy role to fill. Metcalfe does well to keep up with Henderson and the two fill nicely the empty seats left vacant by the aging Bobby and J. R. The young blood does the series well. Yet, do not think Bobby and J.R. are mere nostalgic centerpieces. It is clear from the start that these two will still square off and offer up that volatile and complicated relationship we so grew to love watching 30 years ago.