Home » Interview: Cameron Diaz chats about WHAT TO EXPECT WHEN YOU’RE EXPECTING 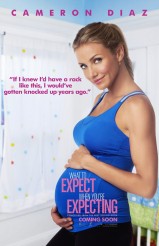 Plus she talks about getting fit, dancing and wearing prosthetic breasts on the film 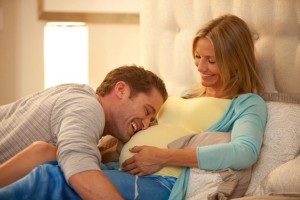 Cameron Diaz has played everyone from kick-ass heroine in the CHARLIE’S ANGELS movies to a terrible teacher in BAD TEACHER. However, playing a pregnant woman was brand new to her in her new comedy WHAT TO EXPECT WHEN YOU’RE EXPECTING (based on the best-selling book of the same name).

In the film she’s a weight loss fitness show host and a contestant on a DANCING WITH THE STARS-esque series who is paired up with GLEE’s Matthew Morrison as one of the many baby-making couples in the movie.

“I was so lucky to be able to, you know, be [Matthew’s] partner not only in dance but also in us having a baby together [on screen],” says Diaz. “First off,’ he’s just the loveliest human being on the face of the planet and so talented and so charming and so smart, and we just had such a great time.”

And while the movie is about making babies, Diaz enjoyed the fitness and dancing aspect of the shoot too.

“What was fun about that is that I love to work out,” adds Diaz. I just love it. It’s something that I enjoy doing. I think it’s important to take care of your body, not just for today, but for the rest of your life. I stay fit because I want to be 60 and still doing all the things I’m doing now. So, I like to stay strong. [So] being able to train consistently, eat properly and do all of that – and then dance for a whole week … it changes your body. It’s like all those movements help to make the body a little bit tighter.” 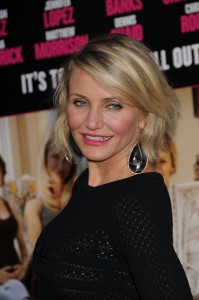 And one of the pluses for Morrison? He got to see Diaz’s breasts.

“Well, he got to see my prosthetic breasts,” Diaz clarifies. “My pregnant breasts, which were really amazing, [and] he was like, ‘Wow. Those are awesome’ and then when they put them on, because it was just the top part, in the Atlanta heat I aged about 40 years by the end of two hours. They were literally like hanging down to my hips. They were like drooping down. They were just melting off my body … and it was really not attractive.”

She even had a moment of “what’s missing” after their movie baby was born during shooting.

“We don’t know where it’s at right now — the baby, the movie baby,” she clarifies. “They just took it from us, and it went someplace else. I don’t know. The other day I was like, ‘Wait. What am I forgetting? Oh, what did I do with that baby? Oh, yeah.’”

Although Diaz has yet to have a baby yet, for the movie she did draw on the experiences of her sister who had a C-section.

“My sister was like, ‘I’m not going to have this baby if you’re not in the room,” recalls Diaz. “And I was like ‘No. You’re going to have this baby no matter what.’ So they were doing her C-section and she’s like, ‘Will you come in with me?’ And I walked in and I was like – ‘what? Why didn’t anybody tell me?’ I was 24 and thinking, ‘Oh, go in there’ and there was like blood everywhere and my sister’s guts on a platter.”

As the topic of breast feeding a child comes up, Diaz reflects on why women have breasts to begin with.

“isn’t that funny why we have boobs, we have them so that we can feed our children,” she says smiling. “I know there’s a belief that you’re not supposed to feed your children with your breast milk, but that’s what it’s for. It’s functional.” 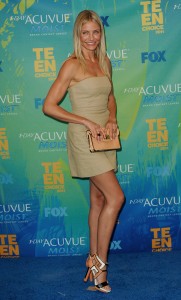 The other aspect of the film, as a whole, that she appreciated was how it dealt with children changing people’s lives in a very honest way and that nothing’s perfect.

“The guys [in the movie are] like, ‘my life changed, everything’s different, there’s nothing that represents who I used to be. I’ve got a baby strapped to me. I’m pushing a buggy. Here I am, but right in this moment I would not change a thing, because this is my life. My children are my life now,” says Diaz. “It’s honest. [The movie] doesn’t try to pretend everything’s peachy keen. It’s really, really hard being a human being, but it’s even harder to raise a human being, so I think it’s honest about that too.”

As for her own feelings toward children, Diaz admits she can’t enough of them when she sees them.

“When I see a really cute baby, I’m like, ‘what kind of sauce would I eat him with?’” she adds with a laugh.

Article Source: Assignment X
Article: Interview with Cameron Diaz on WHAT TO EXPECT WHEN YOU’RE EXPECTING