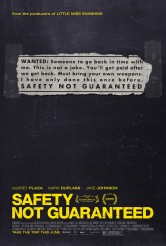 In the mid-Nineties, the following ad actually ran in a survivalist magazine: “WANTED: Someone to go back in time with me. This is not a joke.P.O. Box 91 Ocean View,WA 99393. You’ll get paid after we get back. Must bring your own weapons. Safety not guaranteed. I have only done this once before.”

With this as a jumping-off point, writer Derek Connolly and director Colin Trevorrow have crafted a disarmingly funny film that does the almost impossible. Where most movies, from tiny indies to big studio blockbusters, can’t help tipping their hands as to whether they are genre or not well before they mean to commit either way, SAFETY NOT GUARANTEED keeps us guessing right up until the end. Moreover, unlike projects that try too hard to be mysterious, SAFETY NOT GUARANTEED is so consistently agile and surprising that we become entirely caught up in what’s happening, to the extent that we feel we’ll stay invested whether the time travel turns out to be real or not.

In SAFETY NOT GUARANTEED, the advertisement is discovered by Seattle Times reporter Jeff (Jake Johnston), who decides to research it for a story – mostly as an excuse to look up old high school girlfriend Liz (Jenica Bergere). However, Jeff drags along two newspaper interns, young but already resigned college graduate Darius (AubreyPlaza) and diligent biology major Arnau (Karan Soni), who thinks the reporting gig will look good on his resume. It’s not difficult to find the ad’s author, a supermarket worker named Kenneth (Mark Duplass), but when Jeff blows first contact, he gives Darius the job of finding out what’s actually going on. Darius finds that she and Kenneth have an affinity for one another, even though he is initially suspicious of her motives (she doesn’t mention she’s working on an article) and she thinks there’s a good chance he’s delusional. Kenneth is paranoid, bright and absolutely certain he can travel through time.

How all of this pans out, why Kenneth wants to time travel, why Darius finds the notion appealing, how Jeff and Liz deal with past and present expectations and how Arnau copes with everybody else’s issues all make for compelling viewing.

The cast is all on exactly the same wavelength, honest and wry and intelligent, never punching their lines too hard but maintaining simultaneous conviction and great comic timing throughout.

It seems strange to praise a movie for what it doesn’t do, but SAFETY NOT GUARANTEED defies the kinds of structural and tonal issues that are present in many low-budget comedies. The story has a strong propulsive engine, so that we never feel that we’re in danger of anyone wandering aimlessly – ironically, even when the characters worry about this. Nobody is overly precious or takes offense or has some kind of mood swing to create artificial complications. At the same time, none of the characters are so whimsically optimistic that they seem artificial. We can relate to everyone in their bursts of frustration, hope, trust and doubt. Above all, the film is reliably funny, precisely because the behavior of all of the characters makes perfect sense with what we know of them.

The filmmakers adroitly play with the relationships between the various characters, so that we never feel that we’re one step ahead of anyone, nor too far behind, and the pace is energetic without being rushed.

SAFETY NOT GUARANTEED is good enough to withstand spoilers, but why risk ruining anyone’s enjoyment? See it – it’s both uncommon and charming.