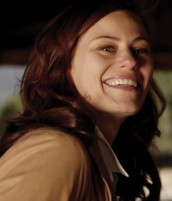 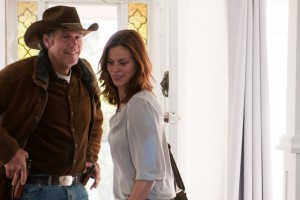 The new western mystery series LONGMIRE premiered last Sunday on A&E to record numbers for the cable network.  The show is based on the best-selling novels by Wyoming author Craig Johnson, and follows the life and cases of Walt Longmire (Robert Taylor) who is the sheriff of a small town called Durant in Absaroka County, Wyoming.

Longmire has recently lost his wife, and his daughter Cady (Cassidy Freeman) is really the only blood related family that he has left. ASSIGNMENT X got the chance to talk to Freeman, who not only hails from fame and following with SMALLVILLE, but also coincidentally comes from Montana. She shares her Midwestern insight into the world of LONGMIRE, and talks about getting to play a character in the flesh that originally only appeared in the first novels as a voice on the phone.

ASSIGNMENT X: Before we even get started I should probably tell you that I’m from Craig Johnson’s (LONGMIRE’s creator) neck of the woods.

AX: I’m from Sheridan, Wyoming…which is just up the road.

FREEMAN: I’m from Livingston, Montana. I grew up half the time in Chicago and half the time in Livingston. That’s where my parents live. That’s so funny you’re from Sheridan! I just drove through there heading from Chicago into Montana.

AX: What drew you to Cady Longmire? Had you read the books, or did you just like the pilot script?

FREEMAN: I had not read the books at that point. Funnily enough my Dad had read them. We’d never talked about them. I got this audition for the pilot while I was still working on SMALLVILLE in Vancouver, and it was towards the end of pilot season. I was pretty busy and working long days, and things come in and go out and you don’t know if you want to try out for something. Then the script came in and I loved it! I loved it not only because it was set in a place like my hometown, but it was such a beautiful script. It takes it’s time and you don’t see that a lot. I feel that most pilot scripts try to shove as much as they can into forty-two minutes so people are hooked. They forget the idea of storytelling; that things take time and a viewer needs time to breathe and time to think about what’s going on. I told my people in L.A. that I wanted to come down and audition for this in person, because it meant so much to me, and I did that and it all worked out.

AX: Cady is such a great character in the books, has your Dad told you all about her?

FREEMAN: Actually I’ve read them all now. [Laughs] She is a great character and it’s funny because when I told my Dad he said “wait… ‘Longmire’… that’s Craig Johnson’s books.” Both of my parents are attorneys and he told me since I had an audition for a lawyer in Wyoming; if I didn’t get it I should quit acting. [Laughs] I just told him OK and that I heard him.

AX: The producers, Hunt Baldwin and John Coveny told me that a lot of this series is taking place before events in the books in a way, so are we going to see a lot more of Cady than we read in the first couple of LONGMIRE novels?

FREEMAN: They talked with Craig Johnson about it, and they all agreed that with the two different mediums, you can’t follow a book exactly in a TV show. You can’t do “The Cold Dish” in forty-two minutes and nor should you. They’ve taken some liberties with the timing. Visually speaking to see these characters on screen you have to have the human side of Walt. With his wife passing away, the most human thing about him is his daughter. For Cady to be a character on the phone wouldn’t have the same sort of impact. Craig was pretty excited to see her in the flesh. It does feel like it happens before she heads off to Philadelphia, but they’ve taken liberties with that to make the show better. So I’m there and I’m not going anywhere. My character is consistent throughout.

AX: Since you’re from Montana, do you ever give insight or suggestions into what your character is doing or speaking, like saying ‘crik’ instead of creek?

FREEMAN: I love that you just said that because I only say ‘crik’ and people think I’m a weirdo. Throughout my entire life I’ve said that. Telling someone it was down by the ‘crik’ and people ask me if it’s 1890. [Laughs] No. It’s called a ‘crik’ what’s your problem? I love that you said that! I actually went into the audition and asked if they wanted any sort of affect or accent on this character and they said “no.” I think they were worried I was going to come in there and start twangin’ away. [Laughs] Or they were afraid I’d starting spitting! It’s great though, I think everyone has done a really great job, having the books, and then having people who really know the area around…I don’t need to worry about anything.

AX: You mentioned the importance of Walt Longmire’s family connection, so how has it been working with Robert Taylor?

FREEMAN: We shot the pilot a year ago, which is going to be interesting to see the second episode because a year has passed. The scene we shot on the porch of Longmire’s cabin was the first thing we shot. It was shot the day before we were supposed to start shooting, because we had to go out to this far away location. I met him the day before in the gym at the hotel. [Laughs] I walked up to him and introduced myself and told him I was playing his daughter. He was Australian and a little shy and a little quiet. I just thought “oh no!” Then in the van the next day on the way to location I was obnoxious. I kept asking him questions about his favorite color, what he liked to do, about his girlfriend, his parents…I was asking personal intimate questions because I wanted to hear him talk and get to know him better. I have to say that I’m really happy because the moment we started working together I felt that Robert and I have a really great natural chemistry. I have so much love for him. Being a daddy’s girl with my real Dad, I understand that relationship really well. Robert has a daughter so I think he understands it too.  Also, the last year when we haven’t been shooting the show, we’ve gotten together and stayed in touch because we all liked each other so much. It’s a real family now.

AX: Are we going to see a lot of aspects of Cady that we haven’t had the opportunity to read in the books?

FREEMAN: Yeah, we’re going to get into Cady’s personal life. A little bit of her romantic life. She’s also going to get involved with some of the cases. A show that only has ten episodes for a season has the challenge of balancing the crime aspect and solving cases every week; with the serial aspect of it and getting to know these characters. There’s crossover in the Venn Diagram of that. So I’m excited to see her interact with others in the cast as a professional.

AX: Cady and Henry in the books have a great relationship that we only really get to hear about but never see. Are we going to finally see the two of them and their familial bond on the series?

FREEMAN: We have a great scene in the next episode. You’ll actually see that relationship between them of God Father and God Daughter. Things that Longmire is afraid to ask Cady about, Henry will actually broach the subject. He’s that cool uncle that gives you a beer. [Laughs]