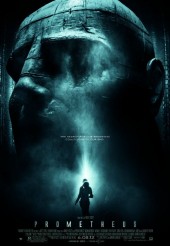 Beautifully made, but too ambitious for its own structure

Prior to PROMETHEUS, director Ridley Scott has, in his prolific career, made only two other science fiction films. However, those two films were ALIEN and BLADE RUNNER. It’s hard to imagine what current science fiction (and, in the case of ALIEN, creature horror) films would look like without those two seminal features in the canon, except to say that things would be different.

Scott seems incapable of making a film that isn’t visually sublime, with images that literally inspire awe. Such is the case with his new feature PROMETHEUS, which has a screenplay by Jon Spaihts and Damon Lindelof. However (you could tell a “however” was coming, right?), by now everyone knows that PROMETHEUS is a prequel to ALIEN. This means that, no matter how serious and esoteric the start of the film, the audience is not going to be remotely surprised when some less-than-friendly creatures enter the proceedings. PROMETHEUS would need a true sense of wonder to overcome the sense that everything preceding the horror sequences is more than essentially a fancy version of “And this is how we get to Camp Crystal Lake.” There are a few sequences that strive for this, but emotionally, the film comes up short.

The plot has a lot of very intriguing concepts and the writers and Scott have come up with a myriad of ways to organically integrate much of the beloved ALIEN iconography while still forging glorious new images.

By now the idea of a group of workers on a space mission whose bosses haven’t leveled with them is not only no longer novel, it’s traditional (a twist would be if everybody knew each other’s motives from the start). This isn’t in itself a problem. However, PROMETHEUS is so very serious about its big ideas that it requires at least one of three elements to earn its earnestness: truly compelling characters, a sense of humor and/or a great payoff.

The best character in PROMETHEUS is Michael Fassbender’s android David, who loves LAWRENCE OF ARABIA and has a very human desire to know why he was made and an equally human sense of injury when he’s insulted, all hidden behind an elegant façade of good manners. Fassbender is excellent, but stands out more than he should because David is the only character who is fully rounded in the writing.

Likewise, the humor – and there isn’t much – lies with David. This leaves the payoff, but although there’s at least an interesting story reason that all of this is happening, it isn’t strictly novel. We do wonder for the last portion of the film how the filmmakers are going to bring things to a conclusion, but this is less a matter of emotional involvement with the characters than intellectual curiosity about narrative choices.

Speaking of choices, there are some that are simply bizarre. Having Guy Pearce play the elderly, ailing man who has funded the Prometheus space mission makes no sense, since he is in a distractingly obvious age makeup. We wait to see him as a young man in flashback to justify the disguise, but it never happens. Given the jarring makeup, along with the comparative scarcity for substantial roles for older actors (as opposed to actors of Pearce’s age), this seems like unnecessary waste of a gig for someone who could have played the part without prosthetics.

There are other places where the script simply gives out. Yes, it’s the future and yes, medicine has presumably improved, but having a character recover from major surgery and promptly rejoin the fray pushes credulity beyond the breaking point. Likewise, when two characters (neither of them soldiers nor mercenaries) that haven’t previously been even mildly heroic learn that they’re on a suicide mission, their easy acceptance of this has neither emotional nor logical resonance.

One could go on and on complaining about details that don’t add up in PROMETHEUS. To answer the big questions, is it moving? No. Is it scary? Surprisingly, also no, although many of the diverse creatures are pretty cool. Is it worth seeing? Yes, and maybe more than once, because as a filmmaker, Scott has again made something that’s thrilling to watch. Does it provide us with something worth talking about? Once again, yes, with the caveat that the post-film discussion is likely to be much more stimulating than the PROMETHEUS’ dramatization of the ideas it puts forth.

Related Link:Ridley Scott says there could be PROMETHEUS sequels in the works

Related Link: Damon Lindelof talks about what PROMETHEUS 2 could be