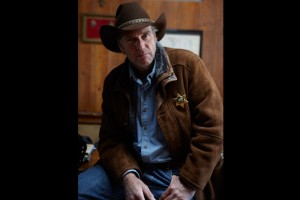 Premiering  Sunday on A&E is the new western series LONGMIRE, based on the best-selling novels by Wyoming author Craig Johnson. The show comes to television from executive producers and writers John Coveny and Hunt Baldwin whose previous series THE CLOSER was a critically acclaimed success for six seasons.

Coveny and Baldwin are re-teaming with CLOSER producer Greer Shephard and are hoping that this modern day western mystery series will go for at least ten seasons.

LONGMIRE follows the life and cases of Walt Longmire (Robert Taylor) who is the sheriff of a small town called Durant in Absaroka County, Wyoming. The series promises to capture the characters and the feel of the books that so many readers have grown to love and the producers promise to bring in more elements to broaden the world of Longmire even more.

ASSIGNMENT X recently spoke with the producing and writing team of Coveny and Baldwin as they took time out from a day of shooting on location to share with us what to expect from LONGMIRE, how they hope fans of the books will react to seeing their favorite characters come to life for the first time, and casting the perfect man to play Walt Longmire.

ASSIGNMENT X: How did you gentlemen come to LONGMIRE and want to produce and write it as a television series?

JOHN COVENY: The kooky thing is that the Hollywood Process actually worked in a sort of cliché way. We had talked to our agent over the years about our love of trying to do a modern day western. I was a big fan of BUTCH CASSIDY AND THE SUNDANCE KID. Hunt’s family has been and lives currently in Wyoming.

HUNT BALDWIN: My mom and dad retired in 1992, and they moved to Wyoming about a year later. So it’s become a big part of my life.

COVENY: It was in both of our bloodstreams. We had talked to our agent and he said that they represented a writer name Craig Johnson for CAA. His books were about Wyoming and it was a modern day western. He said it fit with our sensibilities and has some humor, and with our procedural knowledge we had gotten on THE CLOSER for six seasons. He put the book down in front of us. We read THE COLD DISH and about ten pages in we knew it was something we wanted to develop.

AX: Once all the legalities were in place and you were ready to move forward with development, how long has this taken since that first initial reading?

COVENY: Wow. I’m saying wow, because the length of love and passion from when we started to where we are today shooting episode 107, it was probably a couple of years. [Executive Producer] Greer Shephard sat down with us to talk about the project off of Hillhurst in Los Angeles probably two years ago in that world. Then we developed the project with Warner Brothers, and found a network with A&E. We shot the pilot and it was tested, and testing takes time, and then you get slotted into a time on the network. From gestation to premiere it’s been about a year and half.

COVENY: Oh my God. [Laughs] I was only willing to go two years, but it’s actually been about three.

AX: So this has definitely been a labor of love?

COVENY: It really has been, not so much because of our process but it has more to do with the way this business works. People would get excited about it and then they would step away.  Then other people stepped forward and it really sped up. It’s definitely been downhill for about the last year, it was uphill for the first two. Now we’re sprinting and enjoying the process.

AX: In the books there’s some violence and some language especially from Longmire’s deputy Vic. To keep the feel of the source material was your choice always to air on Cable?

BALDWIN: The reality of the television landscape is there is no where that you can be as rough as you want to with the visuals and the language.  We’ve spent eight years working on Cable television and there is so much to be said for the relative creative freedom that you are given. We would have been open to having this on a bigger network, but we always felt like this belonged on cable. For some of the reasons you talked about and for the reason that it feels different. It’s harder to establish something on broadcast TV that feels different and is differently paced and different looking in our approach to casting. All of those things would have been hard to get support for on a network where they are trying to get the biggest possible audience they can find. Where as on Cable they’re looking for a well executed show that matches their brand first and foremost. Everyone wants huge numbers and all of that, but in the end it always feels to us that it’s easier to make an individual show with a fresh voice on Cable.

AX: You mentioned casting. Once you had a script and a network was the casting quick, and did you have specific people in mind as you were writing it?

COVENY: We had the spirit of Walt (Longmire) in our heads as we were writing it. There wasn’t a person necessarily when we were writing it. Our character combination for Walt was Harrison Ford, Clint Eastwood, and Steve McQueen. We wanted those actors mixed together in a perfect package. Oddly enough, we got that with Robert Taylor. He gives us those pensive moments, the worn but not worn out looks of all of those men, a sense of humor, and the ability to be bad ass without being loud…and most importantly he can be interesting when he’s quiet. He brings a real sense of heroism when he steps on stage.

The actual process of casting was about a month and a half of casting. Part of the process you have to offer it to what you could call “stars”. We offered it to some “stars” and they were either doing movies or busy. But also because we’re doing cable, we wanted the person who was going to play Walt Longmire to be a man himself who had mystery. We found Robert Taylor in the middle of a garden in Australia one day and he came in and read. He has no previous “oh isn’t he the guy from ____”. He is Walt Longmire and it was great to have that chance and A&E embraced not having just a face to play the character, but rather have some one inhabit the character. That person is Robert Taylor.

BALDWIN: In movies and television there is a lot of pressure to start your cast off with a familiar face who already brings with them so goodwill and fans. It’s easy to understand the safety and security that a familiar face brings with them. So often the TV characters you really remember are actors that you didn’t know until you came to know them as that specific character. That’s always the dream. We were lucky in this case that both Warner Bros. and A&E went with us and let us cast someone unknown who is really mysterious and no one will know what he can do. I think it’ll be fun for people to discover him.

AX: Some of the characters from the books are immediately in the pilot episode, but are other favorites like Lucian the old, cantankerous former sheriff and Longmire’s pet dog “Dog” going to be introduced?

BALDWIN: We’re taking that as we. Now that we’re doing the series, the books in a lot of ways are a parallel universe. We’ve taken the soul of the characters and some of the back story, but in some ways we’ve had to fundamentally change things. Even with the history of Longmire himself, we wanted to make sure we were writing the same character that you get from the books but not the same person. Our hope is that the fans of the books are going to feel like we really captured the main characters and the spirit of the place, but they’re also going to quickly realize that we’re telling different stories.

One of the things we’re going to be doing is telling stories before Craig’s books started. For instance, when you meet the character of Vic in the books, her marriage is already pretty much over. When you meet Vic in the series part of what we thought would be interesting would be to see how she is a “fish out of water” coming from Philadelphia. She’s not instantly enamored with or confident about being in Wyoming. We wanted to go on the journey and see how the place grows on here and changes her and how she changes it. Part of the fun of that is to watch what this does to the relationship she comes here with.

COVENY: I remember when I saw LORD OF DISCIPLINE, having read the book and then seeing the movie. Seeing the translation through a television or movie screen you always think “I don’t know if that’s the right show or they got the right guy.” What I think we’ve captured is the spirit of the books. You mentioned Dog. Wouldn’t it be interesting to see Walt and Dog’s relationship from the start and how that came to be?  Then you have Walt and Vic, and we want to see how they came to know each other and not just jumping into a relationship. You’re going to see pre-book Walt Longmire, in the books Walt Longmire, and some of our own inspiration from the novels. As much as we’d love to adapt each book from 350 pages to 48 page scripts, we also want the readers to have as much of an experience as the TV viewers who watch and then jump to the books, it will be a different but similar experience.

BALDWIN: Our hope is as far as these characters, one of the hard things about adapting a book series is the pressure to get it right. But, one of the great things is now that we have this great cast of characters, and all of the places, incidents, and moments to draw from as we come up with our own stories. There are characters that are mentioned that maybe could become a major character, maybe even a minor character, someone that is mentioned for a couple of pages and disappears…that might turn into a really interesting character for us. We’re letting our own storytelling unfold and looking for more opportunities to bring more characters into this world, but we’re hoping that we run long enough that we get to bring in people in a gradual pace so we’re not rushing to bring in Dog, and Lucian and everybody else right off the bat.

COVENY: Having said that, you will see Lucian this year. We have a pretty great actor playing him. I would tell you who it is, but this is a mystery show so now people can blog about and let everyone know that Lucien is coming in the middle of the season. He’s a lot of fun and the way we’ve handled him and their history you can tell the abrasive affection is there from the novels translated to the screen.